‘Koumajou Remilia: Scarlet Symphony’, sometimes referred to by western fans as ‘Touhouvania’, will be released on the 28th of July for Nintendo Switch and PC. It will be available both physically and digitally in Japan. 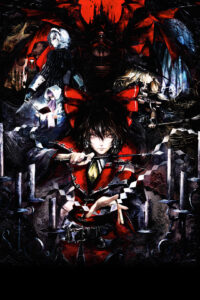 This is an HD remaster of the Touhou Project derivative game ‘Koumajou Densetsu: Scarlet Symphony’, developed by Frontier Aja. It combines the setting and characters of Touhou with Metroidvania gameplay and atmosphere inspired by the Castlevania series, hence the name Touhouvania. The original game was released in 2009 as a fangame with this new HD Remaster being authorized by Touhou Project creator Zun for release as an official title.

The plot of Koumajou Remilia: Scarlet Symphony is more or less a loose re-imagining of the 6th Touhou game ‘Embodiment of Scarlet Devil’. As a red mist envelopes the land of Gensokyo, the shrine maiden Reimu Hakurei traces the source back to The Scarlet Devil Mansion and must battle with the strange inhabitants inside to end the disturbance, including its master, the vampire Remilia Scarlet.

The game has been upgraded with various additional features including HD graphics, additional scenarios, and full voice acting. A limited-edition version of the game is also being sold, which will come with a special box featuring art by the game’s illustrator Akira Banzai, a 34-page art book, and a 27-track OST.

Koumajou Remilia: Scarlet Symphony will release in Japan for PC and Switch on July 28th. While an international release has not been confirmed, the Japanese version of the game will release with English, French, Korean, and Chinese (Simplified and Traditional) language options.

Hearthstone Voyage to the Sunken City expansion is live