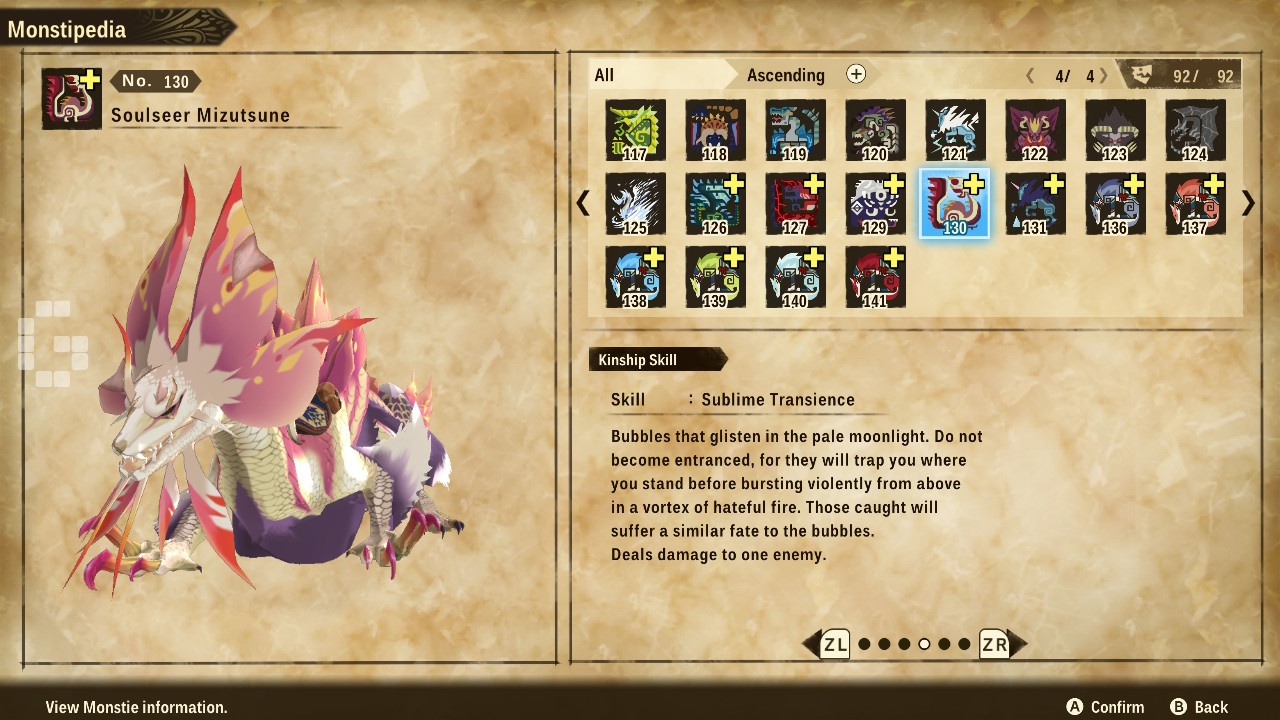 From stats alone, Soulseer Mizutsune is probably the best new water PVE Monstie, with 8 HP and most defenses at 6 for a tanky creature. Where she lacks is her speed, which is at 5.

Water genes are currently lacking in offensive moves, and Soulseer Mizutsune does not bring any, instead having Non-Elemental, Fire and Self-buff Water genes.

There are many other ways that you can already inflict Burn while dealing damage, as well as a plethora of Fire Monsties – including the upcoming Dreadking Rathalos and Molten Tigrex – making S Trap Gene rather useless. The Foxflame Gene is debatable when you have Pump Up.

Soulseer Mizutsune’s gene pools are pretty bad, so they’re better off replaced with others. As with the regular Gammoth, Elderfrost Gammoth comes with max HP base stats. The Elderfrost variant loses 5 points of recovery stats in exchange for 2 more points in Crit Rate. Elderfrost Gammoth has a similar Ice statline to Kushala Daora (8 Ice Attack, 10 Ice Defense). Except Fire Attack (4), most of its offensive stats are at 6, and defenses average at 7. It’s probably the overall tankiest Monstie in the game.

Silver Blast is essentially Legiana’s Freezing Burst with a different name, costing the same Kinship points, dealing the same damage, and the same chance of inflicting Skillseal. Silver Cannon is great, held back by high Kinship cost, and cannot crit. Snow Armor can provide more defense than Ice Armor (from Zamtrios), so you might opt for that instead depending on your Elderfrost Gammoth. Heroic and Vigilance genes should work best in tandem with its low speed. If you intend to use it in PVP, Kushala Daora’s Sonic Strike T can give Elderfrost Gammoth a priority move it can use despite its lackluster speed. Breakthrough Horn is essentially Bloodbath Diablos’ Hellbreaker with a different name. Skillseal’s usefulness is mostly limited to PVP, and it still requires you to use a Normal attack, which isn’t very useful. There are other options that can apply AOE Skillseal while having low Kinship cost, further reducing the viability of Ice Aura. Icicle Terror is the only skill, as of this update, with a high chance to inflict Skillseal, its main drawback being its massive Kinship cost.

As it were, the Non-Elemental gene pool is massive at 10 pages compared to Water’s 3 and Ice’s 4. The update doesn’t bring much to add to Water and Ice gene options, unfortunately, despite the addition of one Water and two Ice Monsties.

Even the quests, where one might expect to be able to farm element specific genes (e.g. Water eggs for Synchronize) is lackluster. It’s a Thunder gene that is only available on Water monsties, and as we’ve established, is hard to farm for. It’s an invaluable gene for PVE combat, for Double Attack damage. Considering the sponges the new monsters are, well, good luck.

The Brave Room Episode 34 – Dunking on the MCU