We’re running through a check-list of post game stuff here in Monster Hunter Stories 2: Wings of Ruin, and next on the docket is a genes guide. Here’s our other guides for the game to check out before you continue:

Granted, genes aren’t limited to the post-game of Monster Hunter Stories 2, as you can already begin testing your luck for these when you get your very first glowing egg. We especially highly recommend reading our findings on the game’s mechanics BEFORE you start planning genes.

Any Monstie can inherit any gene from any other Monstie. This can allow you to have a Rajang that can spit fireballs or summon hailstorms if you so desire.

Besides the genes themselves, you can also try for a Bingo. A Bingo will consist of a complete line of same colour genes, which can provide boosts such as a 5% bonus on elemental attributes / head-to-head or both simultaneously. You can get a maximum of Eight bingos, with the bonus limit capped at 150%. It is possible to change a gene’s position to better suit a bingo, but it also requires you to replace a gene from its original position, then have another Monstie to inherit said gene to the position you desire. Not forgetting needing additional Monsties with the same gene for upgrading, making for a time consuming, resource draining process.

However, as tempting as a mono-colour bingo is, it won’t necessarily make your Monstie better. This guide will aim to provide tips on optimizing your gene builds, as well as sample gene combos. Some Monsties can have all slots unlocked naturally, with the Stimulant meant for every other occasion.

Before you jump straight into gene builds, you’ll want to understand your chosen Monstie’s strengths and weaknesses. Then, determine where you’ll be using your Monstie. There’s additional consideration to be made if you’re going to be in mostly single or pair battles in PVP where you might want even more specialization. Due to the flexibility of genes, PVP “builds” can be highly unpredictable.

Here are some optimum gene placements you may want to reference. The bingo placements will be up to your own discretion, and feel free to make the necessary changes according to a build you want, besides Power / Technical / Speed bingos. To wit: In comparison, this Rajang has no need for a Rainbow Gene as the 3×3 genes it has can make sufficient bingos by themselves without sacrificing a slot for a connecting Rainbow Gene. 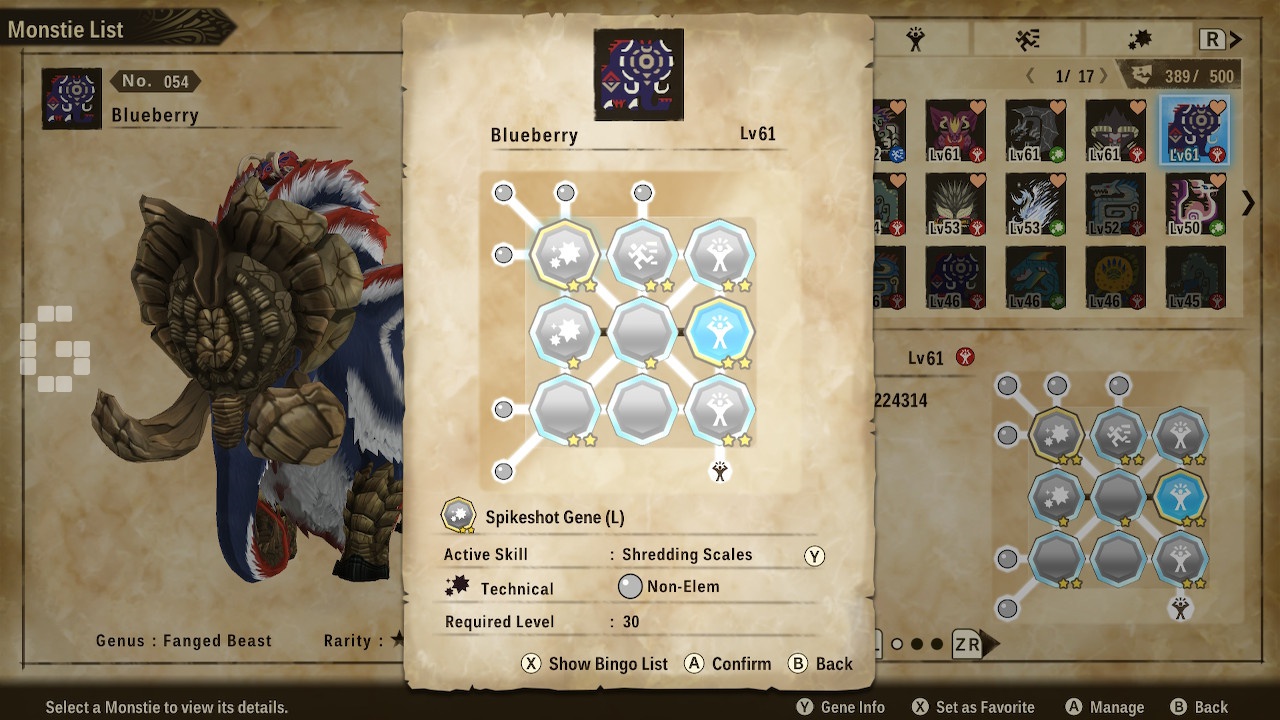 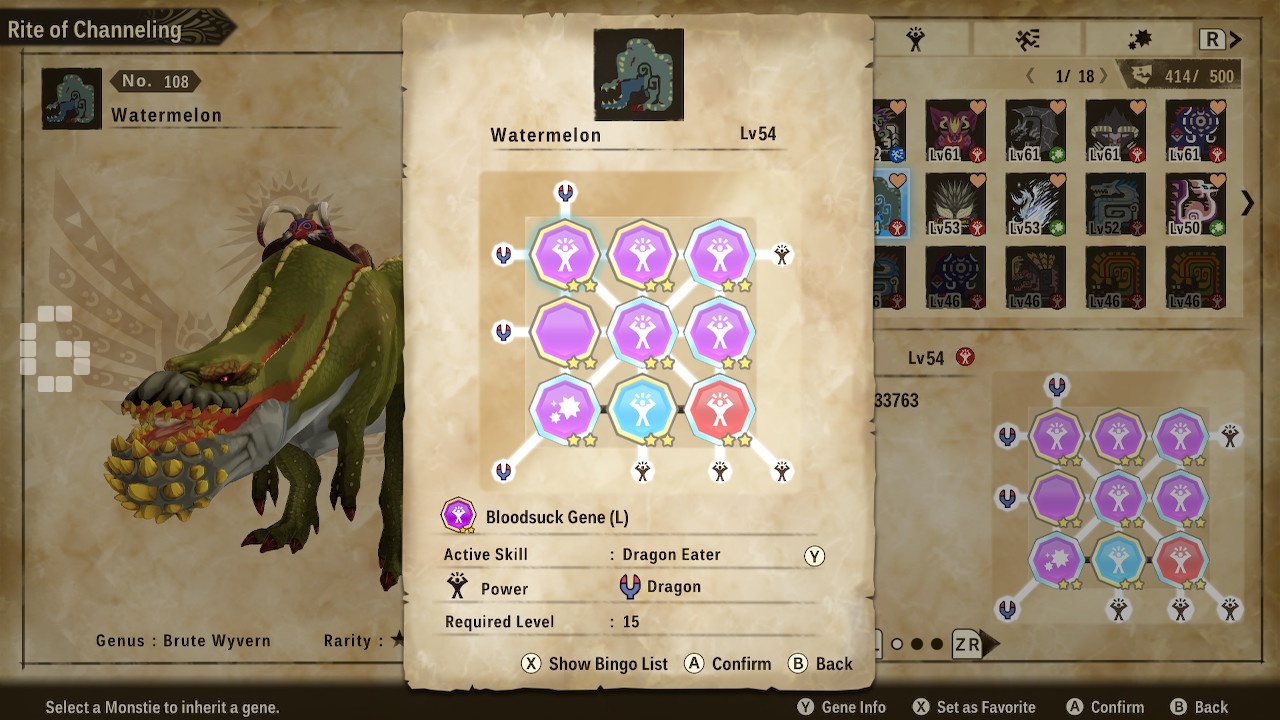 The Gammoth and Deviljho gene placements showcase how you can place off-colour genes while still maximizing the number of bingos you can hit on. In this exact order can you get a 6-colour bingo, not counting Power / Speed / Technical bingos as the colours for these vary depending on their type.

Where possible, try and place off-colour genes at corners to reduce interruption of potential bingos. 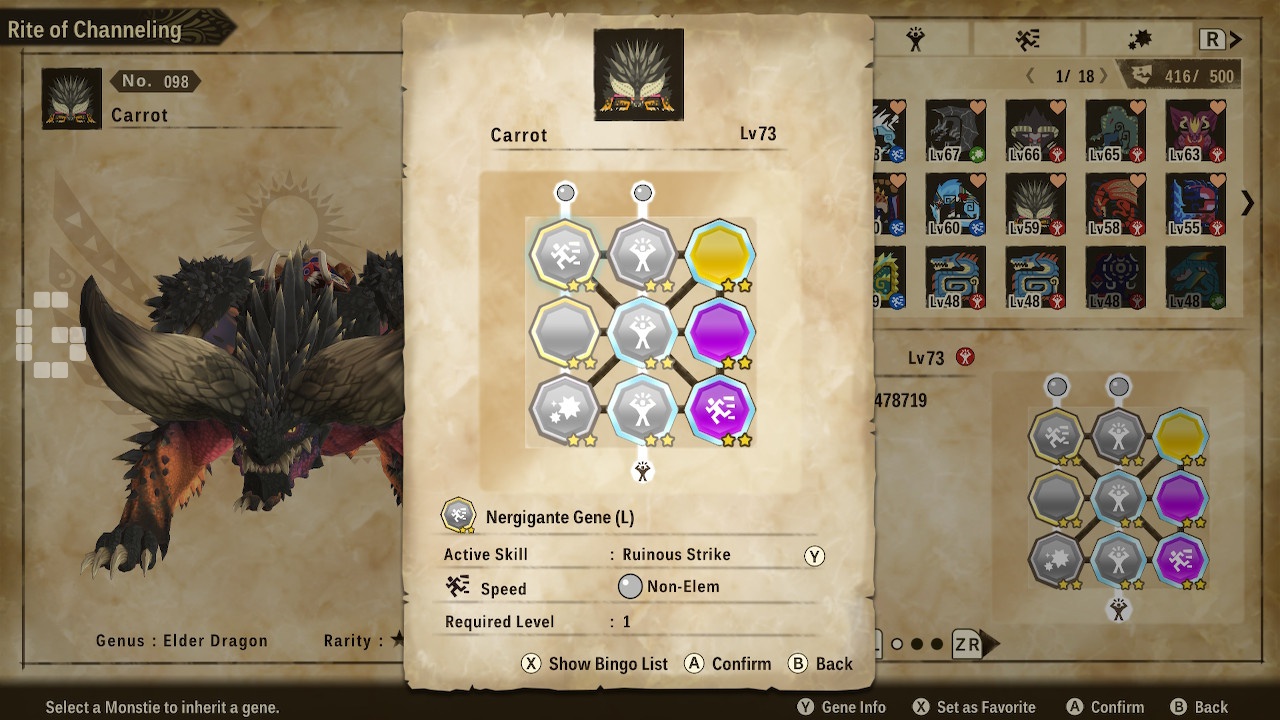 See how this gene placement gives you 3 bingos, when the off-colour genes occupy a whole column. Compare this to the placement below. In this example, the off-colour genes have been moved to the bottom right corner. You now have 4 bingos instead.

Criticals is pretty much your best method of dealing the highest damage possible. Critical Hits also means you can get more Kinship points and / or healing where relevant. The Active Skills listed here have synergy with critical passive genes. You don’t need to have all of them, but it’s a good idea to pick from this set.

This build is focused on avoiding loss of hearts thanks to Tenacity (survive any attack if your HP is over 50%). You can also get the damage boost from Heroic genes. The Critical Eye gene is an option to increase your crit rate. The combination of Vigilance and Critical Eye means you can expect a very high Crit Rate when below 50% HP, and you can easily go back into the safe zone with Critical Healing.

As you might expect, this is to boost your chance of landing debuffs, as well as improving their effects. Ailments are especially useful in PVP, where you’re unable to directly attack an opposing Rider in order to displace both Monstie and Rider.

These genes will ensure you get the speed and damage boost as often as possible through Dancer. The Dancer gene’s bonuses can trigger when your Monstie is at full HP. The Bloodsuck Gene will allow for a percentage of damage absorption. Pair this with Self-Heal and defensive buffs, and your Monstie will always be at full HP thus maintaining the buffs.

This Deviljho is built to be tanky with Heroic and Tenacity genes. Heroic for increasing damage above 50% HP, and Tenacity to prevent one-shot kills when above 50%. The basic strategy is just simply to take damage, then heal back up. From the Bloodsuck Genes you have Dragon Eater to help you regain lost HP, with Dragon Breath being your main AOE damaging skill. Negate Ailment is slotted in for both the gene colour bonus and prevent statuses such as Sleep or Paralysis. If you have an opening, you can set up with Dragon Clad to deal more damage the next round.

This build takes advantage of the 7 Speed stat, one of the highest in the game. With Savage Roar to potentially knock down your opponents before they can move, you could end the game right there and then. The S Head Start Gene from Monoblos is to enable priority attacks for any finishing blows before they can heal. Divine Protection increases Silverwind Nargacuga’s survivability, off-setting its natural fragility. Inflict Ailment and Salt in Wound is to increase Vacuum Blast’s (from Dash Gene L) Bleed chance. For a more offense-oriented Monstie, you can swap out Negate Ailment for Dancer.

This utilizes Kirin’s natural high Crit Rate, pairing it with Ivory Lagiacrus’ Plasma Pressure to crit even more often. Potential and Partner genes synergizes with Last Stand to increase damage when you are low on HP, as well as inflict Paralysis. Zinogre’s Thunderfist is there to make Kirin speedier. Rounding off the build is Critical Eye for even more Crit Rate, Critical Healing for heals on crits, and Critical Kinship for increased Kinship gain on crit.

Hopefully this breakdown of how genes work in Monster Hunter Stories 2 has helped you figure out your prioritization when it comes to Monstie builds.

For our other guides, check out: