Once again, Acer has decided to release yet another newer Nitro 5, so it is time for yours truly to review the gaming laptop.

This new iteration is packing some serious heat, equipped with AMD Ryzen™ 7 5800 CPU and NVIDIA® GeForce® RTX 3070 graphics card. This is the AN515-45-R8XM Nitro 5 model, which Acer Malaysia graciously sent a review unit to us. Thanks Acer Malaysia! The Acer Nitro 5 looks virtually identical to the previous version. It is decked out in shale black with red accents. With its matte surface, the Nitro 5 will not leave fingerprints on it, unless your fingers are literally dripping in grease, which in that case, is the user’s fault. Thankfully, what made the design of the previous Nitro 5 so cool is still retained.

I feel that there is a downside to having your newer laptop looking identical to the older one, though. The drawback is that it is visually impossible to tell which is the new and old Nitro 5. Personally, I would prefer if they changed a bit of the details, like adding a new pattern to the laptop while retaining the design. That way, your friends would not think that you are still stuck with the old Nitro 5.

That said, with the exact same size and thickness of 23.9 mm and weight of 2.3 kg, it is as easy to carry around as the previous version. In a way, Acer is basically flexing their muscles to tell us that they can fit better hardware in the exact same body. I stand corrected, the only way to visually tell if you have a new or old Nitro 5 is by looking at the keyboard. Acer tweaked the keyboard somewhat. For one, the RGB lighting is a lot more profound and vibrant. The keyboard feedback is also very solid.

However, the keyboard does feel like it has shrunk somewhat. This has caused me to accidentally press on the wrong keys several times, such as pressing 1 instead of 2. It takes some time to get used to, but is otherwise an issue that can be overlooked. An even better display

Rejoice, FPS fans! The new Acer Nitro 5 boasts a screen with 165 Hz refresh rate, a step up from the previous Nitro 5’s 144 Hz refresh rate as stated in its review. It is ever so slight, but it does feel smoother and more responsive gaming on the new Nitro 5.

Aside from that, the display is 15.6 inches with QHD resolution. The laptop’s screen-to-body ratio is a respectable 80% while the bezel is as narrow as 7.02 mm. Note that the built-in webcam captures footage in 720p, so you might want a dedicated external webcam for streaming.

Gaming aside, the colours displayed on the screen have great contrast and makes for a good movie viewing experience. There is another minor pet peeve, which is the screen’s brightness is rather dim compared to other laptops. At max brightness, it does not feel very bright if you were to use it in a brightly lit room or even outdoors with the sun shining. I decided to lump the ports and battery sections together for this review as there is not much that needs to be said about the former for the Acer Nitro 5. There are two USB 3.2 Gen 1 ports, an Ethernet port and an audio jack on the left. On the right, there is a USB 3.2 Gen 2 interface, HDMI interface and a USB 3.2 Gen 2 Type-C interface. Pretty standard for a gaming laptop nowadays. To charge the laptop, the power port is at the back. Note that you need to insert the charger into the port with a bit of force until you hear a “click” sound. For 2 hours, I was not able to charge the laptop because I inserted the charger but it was not charging. It only charges after the cable is inserted with a “click” sound, so do not make the same mistake as I did.

Besides that, the laptop’s battery run time should last you over 10 hours at max charge (extended use will obviously bring this down). 10 hours is a great time, longer than the previous Nitro 5s. Acer Nitro 5 has a new and improved cooling system, two fans and four exhaust holes located at the corners of the laptop to keep the body cool. Players can use Acer CoolBoost and NitroSense to monitor the fan speed and adjust the wind speed to achieve the best heat dissipation effect when needed.

However, as I expected, the thermals are not as great as the older Nitro 5. After all, when you are packing better hardware into the same body, something has to give. Overall, the laptop feels hotter, even with the fan at full blast, which is rather noisy.

The good, bad and weird thing with the heat dissipation is that the heat seems to radiate from the area of the enter key. If you are typing while playing a demanding game, your fingers will feel uncomfortably hot. However, if you keep your fingers near the WASD key, it is not really a problem.

The ultimate test of a gaming laptop—gaming! Ryzen 7 5800H and RTX 3070 are powerful CPUs and GPUs so I was keen to see how the laptop performed. For this review, I played 4 games on the Acer Nitro 5. They are Biomutant, Cyberpunk 2077, Days Gone and Apex Legends. For an open world game with miles and miles of beautiful scenery like Biomutant, the Nitro 5 was able to perform. With full HD graphics, the laptop was able to maintain between 65 – 80 FPS, even in the heat of action-packed kung-fu combat, which is great. Cyberpunk 2077, the PC killer, is the Nitro 5’s next test. Playing the game on Quad HD settings (1440p resolution), the laptop could only manage between 33 – 40 FPS which is not ideal. 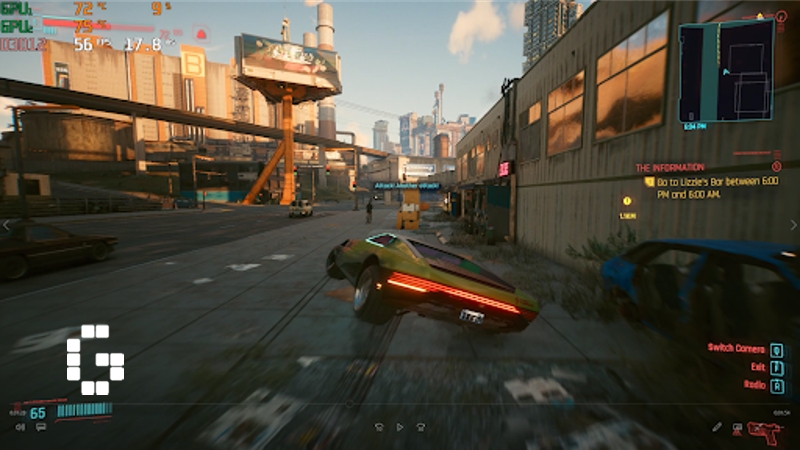 Next, I played the game on the Full HD settings (1080p resolution) and the frame rate improved to an acceptable range of 55 – 68 FPS. However, turning on ray tracing will drop it to between 35 – 50 FPS. I also ran two different tests on the Nitro 5 for Days Gone. I played the game on 4K full quality and full HD settings. For the former, the game clocks in at around 53 – 61 FPS on average, as seen in the image above. Playing the game at full HD settings raises it up between 85 – 91 FPS, which is smooth and nice.

Finally, I chose Apex Legends to test the laptop’s performance for first-person shooters. Once again, there are two tests—playing the game on Quad HD and Full HD. For the former, the FPS was between 70 – 80, which you can see in the image above. Full HD is a lot smoother, with the game clocking in around 100 – 110 FPS. Note that if you sacrifice the game’s graphics settings, you can obviously push the FPS even higher. After using the new Acer Nitro 5 for almost a week, I can say that it is a solid laptop overall. Personally, I do feel that it is in a rather weird position. Acer’s Predator line is typically the higher-end option for gaming laptops, whereas the Nitro 5 series is easier on the budget.

However, this new Nitro 5 is approaching the Predator’s territory, which I find pretty strange. On its own, it performs exactly like how you would expect of a 15-inch laptop with Ryzen 7 5800H and RTX 3070. You can still play around with its settings and get reasonable performance on even the most demanding of games. The drawback is of course, its thermals.

Besides gaming, you can still use the Nitro 5 for other tasks like video editing or watching movies. Compared with the older Nitro 5s which are less than RM 5,000 this new Nitro 5’s price tag of RM 6,399 feels more expensive but is justified considering its hardware. If you are a big fan of the Acer Nitro 5 series and want a stronger version of the laptop, then this one is for you.

Visit Acer’s product page to learn more about it.