Players can now pre-register for Cloud Song, the Southeast Asian version of Guardians of Cloudia, and stand a chance to win lucrative prizes. The hit anime fantasy action MMORPG adventure will be giving away a total of 50,000 USD worth of prizes, including PS5, iPhone 12, Samsung Galaxy S21 and more. For tips to win these rewards, check out this video. Previously released in China and Taiwan, Cloud Song will be available in Singapore, Malaysia, Vietnam, Thailand, Indonesia, and the Philippines for players to pre-register. Currently, over 60,000 Skywalkers have pre-registered for Cloud Song. Players will be able to experience the game in English, Chinese, and their own native languages as they immerse themselves in the open world of Cloud City and its grandeur in this fantasy, cross worlds adventure. As an action MMORPG, Cloud Song presents itself in a bright and vibrantly colourful world. Its adorable chibi anime-styled characters are charming and pleasant to look at. Furthermore, you can even customise their appearance to match the style of your liking. PETs, mounts and many other accessories give players the chance to showcase their fashion sense and personality.

Besides customising the looks of your in-game avatar, players are able to specialise in one of the game’s five classes, covering melee, ranged, physical, magical and all types. These classes are the Archer, Mage, Swordsman, Oracle and Rogue. With each class capable of branching into 2 advanced classes, players are free to experiment and explore their own builds as they combine their talents and skills. 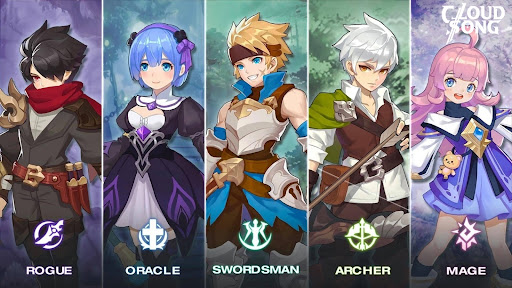 Cloud Song provides a plethora of ways for players to progress and get stronger, from levelling up and equipping new skills and armour, to making use of the game’s Rune system. Experimenting and exploring these methods of progression will keep things lively and engaging as players take on new and harder challenges.

A cool feature from Cloud Song is its PETs system. PETs not only accompany characters in battle, their stats account for up to 30% of your character’s overall stats, making them a vital part of the game. With more than 100+ collectable PETs to choose from, each with their own skills and abilities, be sure to find and train your PET companions to make the most out of your character. On top of that, players can bring multiple PETs to help them out in combat, adding another layer of depth to battles in the form of teambuilding and synergy.

Cloud Song lets players test out their skills in a wide array of PvP and PvE modes. The game’s PvP content revolves around PK (Player Kill) modes, from 1-on-1 duels to full-blown 60 vs 60 Guild Wars. Prizes and rewards galore as players can earn rare items and rewards from proving their mettle against other players. Glorious titles and exquisite mounts await!

Similarly, players can also forge their own unique experiences and make friends along the way through PvE modes and missions. The game’s wide offering of PvE modes rotates depending on the day of the week, keeping things fresh. From tackling huge bosses to embarking on Treasure Hunts and even exploring Ore Mines, players will have a lot to look out for as they level their character.

A Journey of Love and Friendship

Unlike many other mobile MMORPGs, Cloud Song offers a refreshing amount of social content for players to invest their time in. Not only does the game have a Guild system, you can even get married to other players! From voice chat support to a wealth of mini-games, there is a lot to explore in Cloud Song as players build the in-game community around them.

Be sure to pre-register for Cloud Song to be notified of its release and to earn in-game rewards. Lucky players will even be able to walk away with a brand new PS5 or the latest smartphones. Grab your friends along and be ready to embark on a promising new action MMORPG experience! Cloud Song
Publisher: VNG Games
Release Date: 2021-09-08
Android, iOS
Decide what life you want to have and embark on your journey - summon and collect pets, battle against enemies, customize to your heart’s content and explore the world in Cloud Song, a mobile MMOARPG adventure.
Tags: Cloud SongVNG
ShareTweetShareSend
Previous Post