Soul Hackers 2 Preview: A More Casual Devil Summoner With Plenty of Homage To Past Games

It’s not long now until Atlus’ Soul Hackers 2 makes its way onto modern consoles. A sequel made 25 years after the original Devil Summoner: Soul Hackers, the game will be the fifth entry in the Devil Summoner series and the latest installment in the long-running Megami Tensei franchise which includes Shin Megami Tensei and Persona.

We were lucky enough to get an early preview of the game thanks to the good people at Epic Soft Asia. After playing the game for four hours, we can say that Soul Hackers 2 however clearly wishes to stand on its own two legs with its own flamboyant take on classic SMT gameplay, while still paying tribute to the series previous entries.

This starts right with its main protagonist Ringo, a female, non-silent lead (both rather uncommon in Megaten) who’s bound to be popular in certain circles for certain reasons, not to mention very cosplayable, right alongside Joker and Nahobino. Soul Hackers 2 revolves around a secret war between two factions of devil summoners: The Yatagarasu and Phantom Society (the former appears in the Raidou Kuzunoha games and the latter in the original Soul Hackers).

Aion, a digital hivemind that has gained sentience calculates that humanity will soon face a world-ending disaster and creates two agents to fight against it: Ringo and Figue. Throughout the game you play as Ringo, investigating the disaster, meeting new allies, and slowly learning about the beauty of humanity beyond her original AI origins.

What separates the Devil Summoner games from mainline SMT is that instead of the post-apocalyptic setting, these games tend to be more like pulpy detective thrillers. Devil summoners who use their demons to solve supernatural mysteries in a semi-contemporary setting.

We didn’t get to see much of the plot in the four hours we got to play the game but it does set up a premise similar to the previous games. A deep dive into a dark demonic mystery involving secret organizations, alternate worlds, and sci-fi hacking.

If you’re someone who got into Atlus games with Persona 5, this could be a good gateway to see just how varied the wide range of Atlus RPGs can be with Soul Hackers 2 being pretty much as accessible as that game but with the darker concepts of demons and secret cults to keep long time fans happy. Soul Hackers 2 sees Ringo and her team adventuring through a glitzy Japanese Metropolis with a heavy emphasis on new tech. Here demons are just myths and legends but summoners can enter ‘Realms’ (much like the dark realm in the Raidou games) where demons can gather and summoners meet. This is where the player goes to find facilities for summoners that allow demon fusion, COMP enhancements, and information gathering.

Like the original soul Hackers, the game makes use of a cyberpunk aesthetic but is updated with a more modern design fashion creating a colorful city that for an interesting contrast with the more traditional demon designs. Older fans might say it’s too flashy but I think it’s good that it looks so distinct from previous games. It gives the game it’s own identity and it still gives off a strong sci-fi feel which is in line with the previous Soul Hackers, a game that was heavily themed around the emergence of new technology.

As you can tell from my constant referencing, it certainly hasn’t forgotten about the older games. The game very much attempts to follow up from the past Devil Summoner games with reoccurring characters like Victor reappearing alongside similar mechanics like summoning a demon to help find items for you. 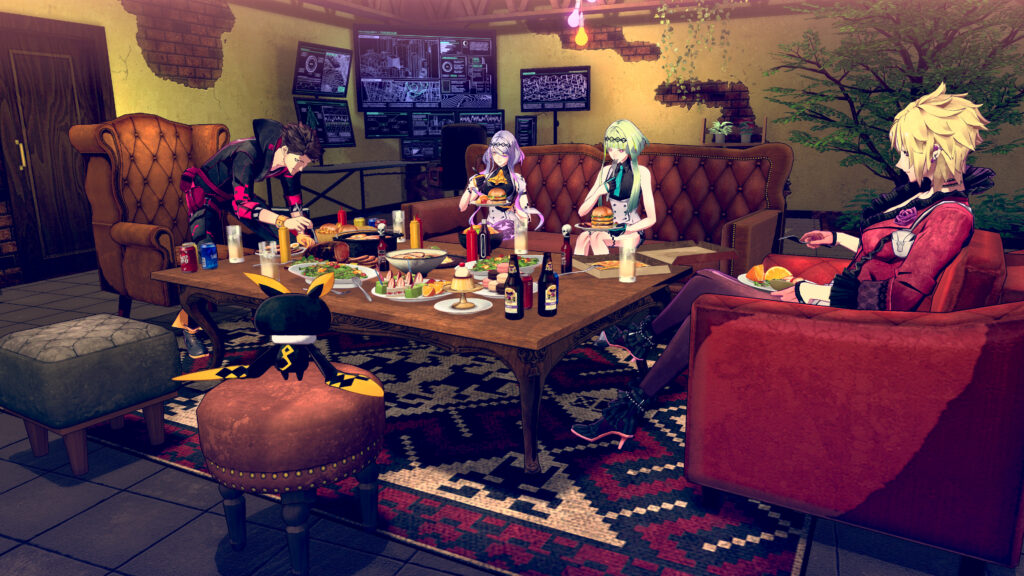 With Ringo not being a silent protagonist, players will be able to see her grow and bond with the other characters as the game goes on. This can be done impart by taking on vision quests which allow you to learn the other character’s backstories and make the team stronger as a result. You can also just hang out with them at your Safe House where you can have a burger and fully restore your HP.

Each of the party members is pretty fun to be around although we didn’t see much of them individually from the preview. If I had to pick a favorite it’d probably be Saizo but that might only be because he kind of looks like Hazama from the Blazblue games. Each party member will have to be assigned a demon as well as a ‘summoner skill’ with can vary from buffing stats to adding more stacks for the Sabbath. These are abilities Ringo acquires from the ‘Soul Matrix’, a space inside her mental state. The closer she bonds with her allies throughout the main story, the further her ‘soul level’ goes up and the more of The Matrix she can explore to unlock new skills.

Ringo and her partners can upgrade their COMPs, the weapons they use to summon demons. The COMPs have additional properties, such as “mystique adaptation,” which is separated against all elements on the affinity chart, as well as miscellaneous skill types, such as Ailments, Recovery, and Support. 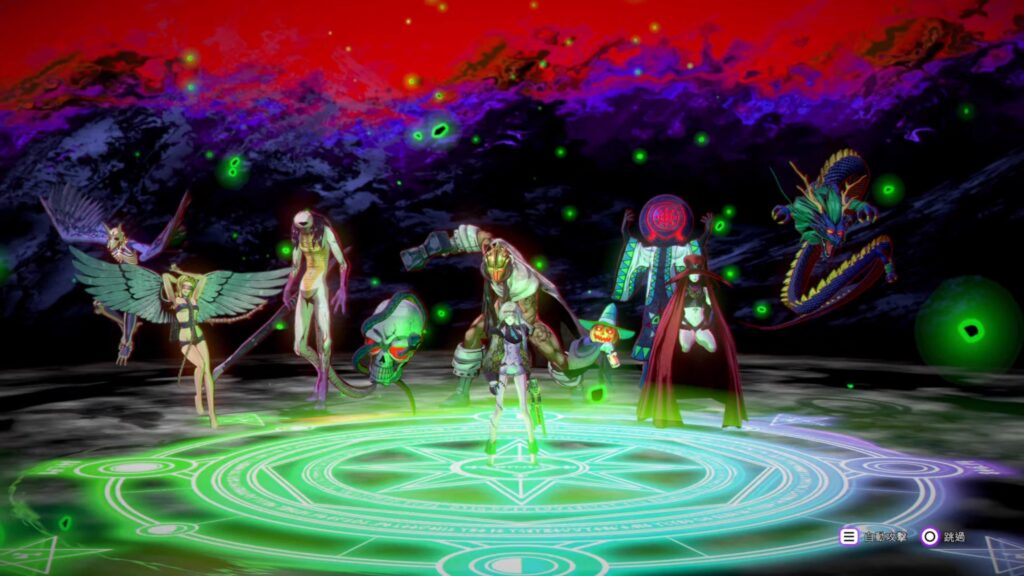 The game uses the tried and true Megami Tensei press turn system, where players will attempt to hit an enemy’s weak point. Unlike previous games where this gives you an extra turn, hitting a weakness here will give the party a ‘stack’, and at the end of your turn, you’ll use these stacks to unleash a ‘sabbath’. This is a finishing blow that hits all enemies for massive damage, similar to the all-out-attacks from the Persona games.

What makes the game more interesting is that the player controls a party of four individual characters and assigns a demon to each of them, an idea that Atlus hasn’t really used since the Persona 2 games. Additionally, each of the party members has completely individualized move sets, for example, melee characters can only use melee attacks, while gun characters will stick to firearms. It’s a cool idea that creates a lot of customization as you have both the unique aspects of the summoner and the demon to work with and build.

Like previous games, you can recruit demons using the usual demon negotiation system and then fuse them together to create stronger demons. Battling with a demon will level them up so they can learn new skills. Once they’ve learned all of their skills, they will give the player an item to improve the party member’s own abilities similar to the essence system in SMT V.

The game definitely more on the casual-friendly side compared to mainline SMT. The game doesn’t actually have a menu but rather buttons that execute different options. It even has an assist mode that can recommend you certain attacks if you’re having a hard time with a boss (keep in mind, you can turn this off).

At the end of the day, however, it’s still an Atlus RPG, so you’ll still have a good share of dungeon crawling and monster collecting, not to mention, multiple difficulty options if you really need that classic SMT level of masochism. Overall Soul Hackers 2 is looking to be a good entry point to the Megami Tensei franchise, I’d even say it can act as a good bridge between Persona and mainline SMT.

It’s easy to see the game as too different and too ‘anime’ (hate that critique) compared to the original but for all the differences, it’s very clear the game wants to pay homage to the older titles with references, plot points and concepts brought back from both classic Devil Summoner and the Raidou games.

It’s clear to me that Atlus wants this game to be a soft reboot of Devil Summoner and make the series stand as its own IP away from Mainline SMT and Persona. With this in mind, I’m optimistic. I find the overall sci-fi vibe of the game to feel distinct and I’d like to see how Megaten handles a non-silent protagonist (I know Tokyo Mirage Sessions had one but he was so boring he might as well have been silent).

I suppose we’ll see what Atlus has summoned when Soul Hackers 2 releases on August 26th for PC and Consoles.