by Kit
in All, Gadgets, Reviews
Reading Time: 5 mins read

By virtue of design, this one is the smaller of the duo with a 65% form factor. It carries the basic necessities of a keyboard, sans function key, numpad, and reduced buttons set above the arrow keys – in this case consisting of Del, Pg Up, Pg Dn and Ins, with a Razer logo sandwiched between. It can feel surprisingly heavy for its size, though not by much. The keyboard itself is kept nice and clean-looking overall and as always, you can tweak the RGB lighting through Razer Synapse. Considering it’s more geared for portability, the rubber padding on the bottom is very much appreciated to prevent it from slipping around no matter the surface you happen to place it on. It’s got a stand with two levels of adjustment, the first level barely having much difference than being flat on a surface. Since it’s not a wireless keyboard, there’s no space for a receiver. The RGB areas are for the buttons and the logos, which you can set profiles to. One gripe is that it’s not easy to tell if the Caps Lock is active or not due to the lack of the notifying lights usually at the top of a keyboard. There aren’t sound cues either, so you’d have to test it for yourself. As with other compact keyboards, you will need to use the Fn key in lieu of dedicated Function keys. It has Gaming Mode too, to disable any buttons you might accidentally press. This mode does have an indicator light, with the exact settings you can tweak through Razer Synapse.

This is the full-sized compatriot, and by that alone, it looks very different because of how many more buttons you get. As mentioned, it has a numpad, media control buttons and a multi-function digital dial. While you’d normally expect the light indicators to be at the top, the Huntsman V2 places them above the arrow keys instead. The rubber padding is in place alongside the little stand with the same degree of adjustment as its Tenkeyless compatriot. The logo isn’t emblazoned on the keyboard itself, instead displaying the “By Gamers. For Gamers.” motto, the logo relegated to the middle of the wrist rest. It’s easier to see what modes or keys are active for the full-sized Huntsman for that convenience. Otherwise, its other functions in the Media Control buttons let you play / pause / skip tracks, with the digital dial by default adjusts audio volume. You can press it to mute or unmute as needed, the light turning red if you’re muted. 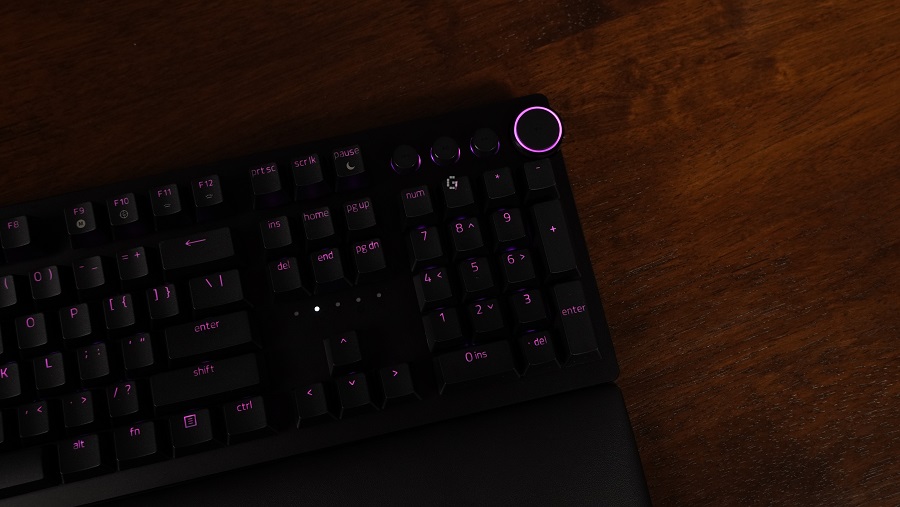 As I said earlier, this Huntsman v2 has Media Control Buttons. You can use the buttons to play/pause a music track or skip tracks backwards and forward. While the Multi-function Digital Dial by default is rotate it to increase or decrease the volume audio, or press it to mute and unmute the audio output. The dial will light up in red colour when the audio output is muted.

The Tenkeyless version doesn’t have a very loud clicky sound, giving the impression of typing on a laptop. It utilizes Razer’s Linear Optical Switch Gen-2 – for lighting fast actuation with smooth, silent keystrokes. Typing is comfortable, but less so for gaming due to how close the keys are. However, getting used to the keyboard helps to reduce what discomfort there is, likely a bigger concern for those who have bigger fingers. It’s definitely suited for FPS gamers which rarely utilizes Function keys, and the lack of a numpad means there’s more space for any sweeping mouse movements depending on your preference. The Esc key is also next to the 1 key for easy access. The Razer Huntsman V2 is not only larger than its Tenkeyless version, it also has different switches, instead using the Razer Clicky Optical Switches for lighting fast actuation with crisp, tactile feedback. It lets you enjoy quick, snappy keystrokes with satisfying sounds, while being lighter than traditional mechanical switches and boasting up to true 8000Hz polling rate for lower input latency. The size allows the keys to be more comfortably distanced and have more buttons for various convenient access. If you prefer louder keyboard sounds, then the full-sized version should be your pick.

Both the keyboards pack their own Ergonomic wrist rests, likewise with their minute differences. The Tenkeyless version just needs to be positioned below the keyboard and you can slide it in, with a comfortable and appropriately supportive cushion. The Huntsman V2’s rest has this somewhat magnetic slide to attach to the keyboard, with a cushion that feels thinner and less comfortable. This would probably differ depending on what your preference is. As mentioned, both can be customized through Razer Synapse. Besides the lighting, you can change button functions, a time to dim the lights, or to turn off after a period of inactivity. Don’t forget the gaming mode!

Either version has their own pros and cons. The Tenkeyless’ switches would be preferable for someone who likes something quieter, but the lack of keys stemming from its compact design can restrict its use for games that require a wider spread of buttons. The full-sized Razer Huntsman V2 can provide an overall “best” experience with more flexible usage, with points of contention being the sound and a somewhat uncomfortable wrist rest.

Basically, pick the one that would best suit your typical use, because they are both good at what they do: being highly customizable gaming keyboards.

Learn more about the keyboards on the official website:

Take on Kael’thas and Lady Vashj in Overlords of Outland, Now Live in World of Warcraft Burning Crusade Classic