Eden consists of four 25-minute episodes, so if you’re up to spend a little time on Netflix, then just break out some snacks, and settle down for a little comfy show. If you’re not familiar with the show, it’ll be available for streaming through Netflix on 27 May 2021. The summary is given as follows:

Thousands of years in the future, a city known as “Eden” is inhabited solely by Artificially Intelligent robots whose former masters vanished long ago. On a routine assignment, within the depths of the city, two maintenance robots accidentally awaken a human baby girl from stasis questioning all they were taught to believe– that humans were nothing more than a forbidden ancient myth. Together, the two robots secretly raise the child in a safe haven outside Eden. With the series only being four episodes, this review will be spoiler free, so that you enjoy them in your own time.

Unlike my last review for Dota: Dragon’s Blood which features more 2D animation with use of CGI, Eden utilizes 3D modelling from the get go, for a different style. We can argue till the robots come home about which style is better, but Eden‘s use of 3D is perfectly fine. Sara, as our sole human, is our expressive, precocious red-haired and red-eyed heroine, with a fiery spirit to match. She looks right at home with her robotic “parents”, who are both equally colourful with smooth edges unlike the sharper angles and pitch black / red dressings of Zero. 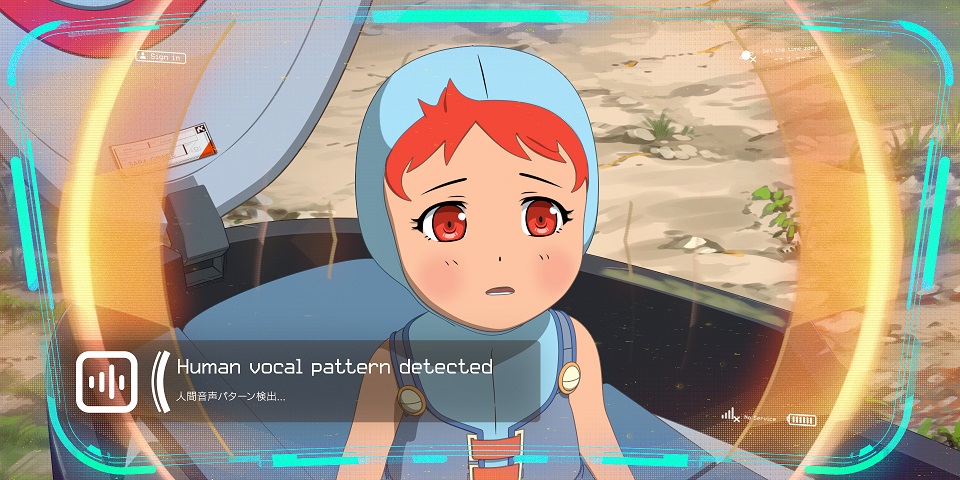 Whatever happened thousands of years ago, when the humans disappeared, little trace of it looks to remain. You have neatly maintained green fields, full of apple trees tended to by robots following their programming. Contrast this with the barren lands Sara eventually travels on her little buggy scooter, or even the tower she dives off: the battered, plain ol’ brown, presumably of the old world. Then you have whatever that glass cube is, reflecting the fields around it, a looming presence over everyone else, just a little out of place in a tranquil world. The music by Kevin Penkin is suitably fitting; when you remember he’s also composed for Made in Abyss, you could say he’s right at home here. I’d be hard pressed to describe what exactly draws one to the music, but there’s no notes wasted or a track out of place.

At some point in the distant future, humanity has put the Earth through some shit, and they are no more. Honestly, good riddance. However, we do need a plot to kickstart the whole thing, and a pod, containing our heroine, Sara, is found by our heteronormative robotic parents; E92 being the bigger, blue dad, and A37 the rounder, yellow mom. This is a problem, as it’s been drilled into them that humans are bad news. Can you blame them? Zero’s black and red design doesn’t make him look any more like a good guy or anything, but that’s a totally fair assessment. Anyway, parental instincts have been triggered in E92 and A37’s circuitry, and they must protect this cinnamon roll. You know, with the name of Eden and an apple orchard instead of a barn, I’m not saying Sara is drawing parallels to religious imagery buuuut think about it! In any case, they can’t stay in Eden-3 what with having a human kid having to subsist solely on apples, so they leave their designated programming to raise Sara in secret.

Since she’s a human kid, Sara grows up. It would seem that there are other humans and Zero has a nefarious plan up his robotic noggin to eliminate them once and for all. For someone as rambunctious as Sara, it would be inevitable she’d stumble into trouble first thing, and the majority of robots aren’t magically gonna be a-OK with a human among them after what has been embedded in them. The story is an easy one to follow, though at some points it would be good to pay attention. Keep the questions to yourself first, as they’ll be answered over the course of the anime. Like I said, this will be a comfy little watch, whether by yourself or with others.

You can watch the anime in either Japanese or English dub, with an additional option of Japanese with Audio Descriptions with a narrator. Subtitles are available in English, Malay and Traditional / Simplified Chinese for Malaysian viewers.

Eden feels like it would have worked just as well, if not better, as a feature film, instead of being separated into episodes. The story doesn’t necessarily bring anything new to the formula of plucky protagonist saving the day in a post-apocalyptic recovery setting, which doesn’t need to be a bad thing. It’s how you use the clichés, and this is where I’ll be more down on the show. Besides Zero looking like a gaming laptop gijinka, E92 and A37 being honestly somewhat cute and Sara herself, I don’t feel that Eden gives me anything that makes it stand out from the pack which is a damn shame. It can give me likable side characters? It’s got the OST going for it, for fans of Kevin Penkin.

Eden is an alright show, something short and sweet to pass the time, to ease people new to anime into. Consider it a springboard to recommend more, longer anime if they liked any particular aspect in it, and perhaps that’s all it really needs to do.