Okay, so. Presumably for most of us Dota fans out there, an anime adaptation of the game was not on the cards. I certainly was taken by surprise, but then again, hey, why not, maybe it’s about time Valve actually did something more with their intellectual property. In this preamble, I will confess I’m not the biggest lore junkie by any stretch of the imagination, mostly gathering bits and pieces here and there, and tuning in to the DPC if it’s not at some ungodly hour. I will, however, ask that you trust that I can pick at the story as both a fan and a relative outsider to its nuances.

And so we come to this, a review of DOTA: Dragon’s Blood, as produced by Ashley Miller and animated by Studio MIR. It’s an 8-episode romp, roughly 25 minutes each. Netflix kindly gave early access to the show, so thanks a bunch for letting me spoil this for you. Which, warning, I will indeed spoil this show, so if you can spare that time for a watch, go right on ahead. This review will be waiting for you.

Studio MIR’s done a pretty nice job on the whole, you know, animation thing, blending the 2D drawings with use of 3D models here and there, with only a couple of occasions where I felt it out of place / awkward. Terrorblade gets this sickly green aura, at once colour coding him to be that ominous demon, for the benefit of non-Dota 2 fans to recognize that yes, this guy doesn’t have great intentions. It helps that his design, when compared to the rest of the cast, while humanoid, doesn’t have the kind of features we’d expect, so he stands out even more. I can see why he’s chosen to be that underlying threat.

Honestly, I wished Davion was much darker, but he’s still clearly more tanned than the others, so I’ll take what I can get. When it comes to his transformed form, however, I really don’t like it. Design and tastes are entirely subjective from person to person, so maybe others will like it. However, I just don’t feel like it conveys ‘dragon’ enough. The transformation just looks like a more spikey Galra (that’s from Voltron: Legendary Defender, which Studio MIR also worked on). No objections about Mirana, her most common outfit in the show is pretty nice for her travels, and her in-game outfit is kept for when she’s much closer to the Nightsilver Woods. It shows that she’s away from her home, if not necessarily out of her element. Marci’s cute, if pretty standard design. I wanna talk about another choice in her design later to tie in with the story.

Fymryn’s your kinda cute elf girl, even if she herself doesn’t necessarily stand out either, besides her powers. Selemene has this ethereal purple glow around her, much like her lotuses, helping her give off more of that otherworldly vibe as befitting a goddess, flowing hair and dress that wraps her figure.

The music from Dino Meneghin is suitably closer to fantasy orchestra fair, the original OST of which you wouldn’t mind playing in the background as you work. Sorry that the most I can say about the music is that I enjoy it, it’s hard to put it into words…

Okay. I have quite a few things to say about the story.

The exposition feels awkward at points, but that’s not the biggest problem here for me. It’s that there’s quite a few plot threats that are going on at once, and they’re not all resolved by the end of the eight episodes. There’s quite a few points for sequel hooks, should this one be good, but as a result, the cohesiveness of the story suffers. The show goes back and forth depending on which story beat its following, which as a storytelling method is not bad, but as you can see, there’s at least three threads hanging – two if we just take Mirana’s and Fym’s as one as they lead into each other – beats we follow. I will give the most obvious driving points as we follow the focus character below for the time being.

Let’s start with Davion’s first, since it is called Dragon’s Blood, after all. We meet Davion as he’s hunting a dragon, suitably bloody with the assistance of his squire, Bram. There’s the inconsequential Mr Baddy who’s got an inferiority complex and just wants to murder dragons, especially knowing there’s an eldwyrm sleeping near his town. Davion tells him to lay off while he goes to get advice and help, not before getting some drinks and meeting Mirana and Marci for the first time.

Mirana and Marci meet up with a shady elf guy for information. Elf guy’s presence also helps inform us of humans against elf racism, and Davion’s gallantry telling him to run, not before we get a name and location for the ladies on the track of Mene’s lotuses. Mr Baddy gets possessed by Terrorblade but we don’t discover him gone off to hunt the eldwyrm until the next morning, whereupon we can congratulate Davion for having sex. Bram teleports himself to Dragon’s Hold to report on the incident by dripping his blood on a purple scroll, which feels unnecessary but whatever, no blood-free Town Portal Scroll here.

Terrorblade has murdered the eldwyrm, of course, apparently waiting around in the lair to possess Davion if he shows weakness, maybe? Slyrak would have none of this bullshit and shows up, but gets grievously injured in the process. Davion moves to end his suffering, but gets his throat sliced for his efforts, and it’s at this point, Slyrak would have possessed him. Hurray.

So, we know Mirana’s quest. Shady elf guy tries to sell Mirana and Marci into the sex trade, but that obviously doesn’t turn out so hot for him. We’re set up to meet the Sage, as he’s cryptically referred to, thanks to the Shopkeeper handing her a Gem of True Sight. She also murders quite a few people with Marci’s help to get Davion out of a pickle to get them to journey together, along with finding out that thanks to Slyrak’s possession, Davion transforms into the aforementioned spikey Galra.

There’s a tangent where Mirana gets separated from the group and comes across ghouls which are people who have been transformed by a Bloodstone or something? I don’t know? She freaks about killing the ghouls in self defense even though she was fine shooting down bandits. It’s just used as a plot point to prove Davion’s humanity and then doesn’t come up again. Sure. 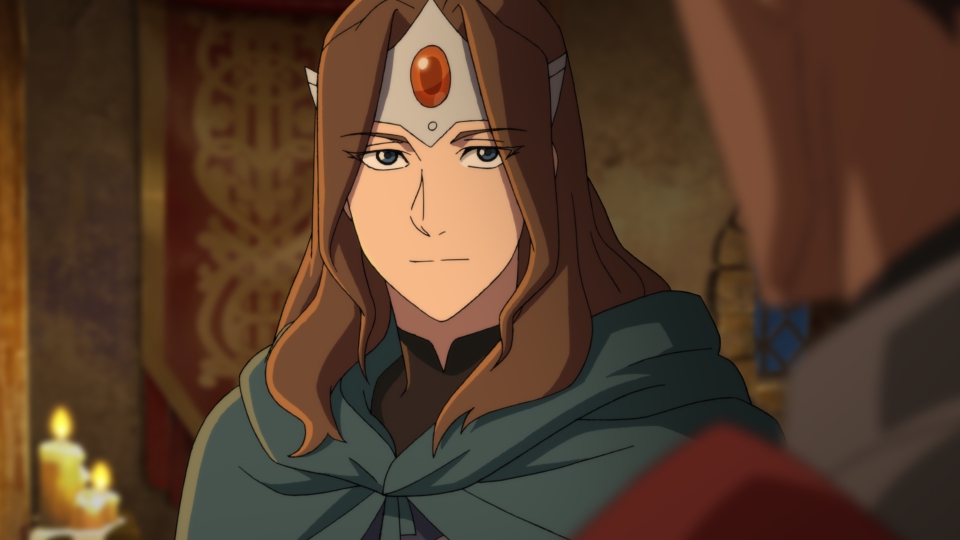 She and Davion have some alright banter to help sell their blooming romance some. It’s not especially groundbreaking, really, besides Mirana revealing to Davion about her reverence for Selemene and feels that she owes the goddess her life for helping and saving the broken who wander into Nightsilver Woods. Marci is mute, so it lends some credence to that. How did Mirana and Marci become so close? It’s not explained.

Plot happens and Selemene is shown to be not her beloved, ever benevolent goddess who rescued her, but still she feels it her duty to bring back peace to Nightsilver Woods, to her goddess. Good job for having convictions, Mirana.

By the way, the subtitles misspell her names at times, but whatever. This elf from Coedwig has special powers, able to use shadow steps and disguise herself. She believes in stories that getting the Lotuses of Mene to the Sage will bring back Mene, and her powers will help her do so. She’s in a pod with three other elves, which is fine. We don’t know much about them, besides that the four of them care for each other very much.

Fym gets a coin when they meet the fabled Sage, who takes the lotuses from her and chides her for overly believing in the stories of old. Lotuses now gone, when the quartet meet Luna in a post-coital state – an off-screen foursome moment – the three who are not Fym die to add tragedy to the girl’s backstory when the flowers are not returned. Luckily for Fym, she does get rescued by the aforementioned Sage.

The coin is a MacGuffin that doesn’t get explored further in this season which ends up getting left behind at season’s end anyway. What we get is Mirana getting jealous over Fym being a little closer to Davion than she likes when they get back on the road to return the lotuses she stole, Fym getting some revenge on Luna though not killing her, so just set up really. We first meet him in the first episode possessing the pilot episode’s hate sink to kill an eldwyrm, Uldorak. He cuts a certain deal, “seven souls for one”, as it’s put, and absorbs Selemene’s life force / power / whatever. There’s plenty of mocking the poor little goddess in what little screentime he has in the final episde and then he peaces out, presumably until the next season (or Book, as they’re called here). Yeah, this section is short for a reason.

THE END OF BOOK ONE

I’m sure you can surmise there’s a lot I left out in the brief summaries above. For Davion, we have the whole thing about being possessed by an eldwyrm (Slyrak), the appearance of Kaden whose fellow knights were murdered by Slyrak, the actual eldwyrm council, Slyrak’s impending madness which will kill Davion, and Kaden appearing to have a plan to undo the possession?

There’s Selemene’s genocide against the elves who don’t worship her, Luna’s little subplot of murder and boy does she have one heck of a body count…

It’s all well and good but it just leaves a lot hanging. I had to admit that if this show didn’t have the Dota name on it, I don’t think I’d have watched it. If you’re a fan, or even when you’re not, there’s quite a bit to enjoy still. However, I believe Dragon’s Blood would have been much better off with focused storylines. As it stands, I feel that the show is standard anime fare that happens to have Dota characters in it. I struggled to give the summaries to try to help you readers understand just how much the show tries to set up in merely eight episodes, and they don’t ‘end’ satisfyingly. I will hope for Book Two to have more episodes, and wrap up at least one of these hanging threads without introducing more. The violence also feels egregious at times, like it wants to justify its rating. Eh, maybe it’s just me.

Dragon’s Blood has its original English voice acting, alongside Japanese, and surprisingly enough, Filipino dubbing. For subtitles, it’s got English, Traditional and Simplified Chinese, as well as Malay (!). At the very least, it’s cast a wider net to reach more of the audience who aren’t necessarily versed in Dota lore.

Still though, will I recommend watching this show? I’ll give it a light maybe.

The Outer Worlds: Murder on Eridanos Review — Select your murderer

HitchHiker is a mystery game headed to Apple Arcade

HitchHiker is a mystery game headed to Apple Arcade