by W. Amirul Adlan
in All, Gadgets, Reviews, Tech
0

Razer has recently released a suite of wireless-enabled devices, covering a keyboard, a mouse and a pair of headphones. We thought we’d check out the devices all at once, made possible by our friends over at Razer.

While wired connections obviously get you more stable connections, it’s important for wireless devices to still exist and accommodate various PC setups. This is especially true for people like content creators or streamers, who might have more elaborate setups to enable them to stream from their sofa.

That being said, here’s the list of the 3 devices we’ll be looking at: The keyboard of the Razer Wireless Suite is the Razer BlackWidow V3 Pro. It’s a neat 104-key keyboard, with full-height mechanical keys. It’s supported by a strong aluminum frame that’s also lightweight, so you won’t have to worry about it not being to handle a tense gaming session.

This keyboard follows a lot of Razer’s general standards for comfort. It has a leather armrest, making sure that your wrists are typing in comfort. A 5 hour work session went by with no discomfort while using this, mixing between writing and gaming. 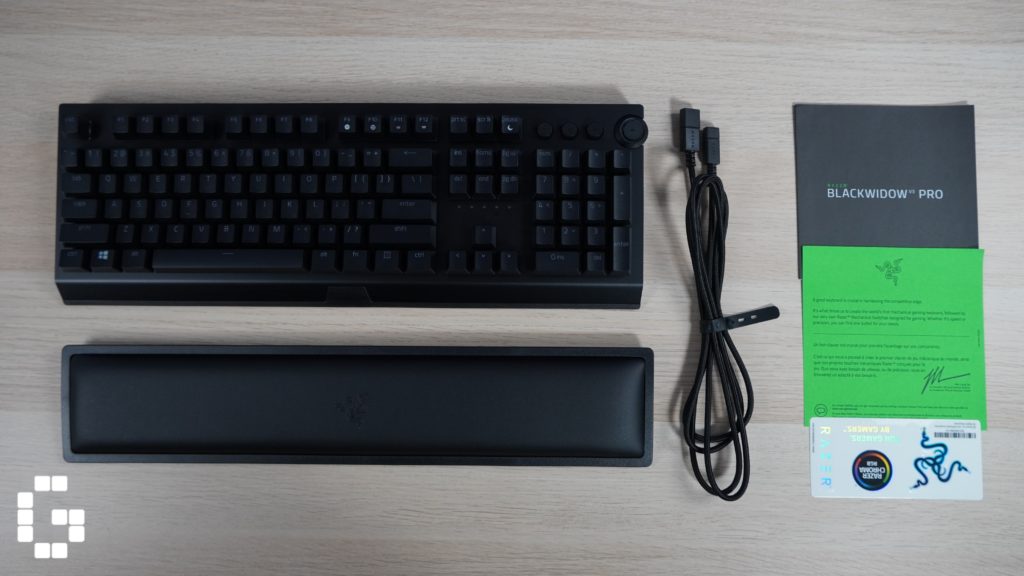 It’s not confined to wireless use, however. The BlackWidow V3 Pro comes with multiple modes, including a Bluetooth and wired mode, so you can use it depending on your preferences.

You can swap these modes on the left side of the keyboard, with the wireless receiver for the 2.4Ghz Wireless mode stored on the keyboard itself. Personally I find you can’t go wrong with a wired keyboard, especially since it also charges the keyboard for later wireless use. It comes with a USB-C to USB cable, making sure you’ll be able to plug it in to your devices without a hitch.

One thing I’ve always appreciated about Razer is how they do the keys for their keyboards, with specially molded ABS keycaps. These feel especially good to the touch, and even have light piping to show the programmable RGB lighting through the keys.

By being raised mechanical keys, they’re also a lot easier to clean. This goes a long way in convenience, earning the laptop a lot of extra points.

The BlackWidow V3 Pro comes with a multimedia knob, allowing you to control media playback. The buttons can also be customized, so you can really tailor your media experience the way you want it. The DeathAdder is a staple of the Razer brand, with its iconic mouse shape that’s remained largely unchanged for the past 10 years.

That being said, the V2 Pro is much lighter than its predecessors. It clocks in at 88 grams, compared to its predecessors 100 grams. While its lighter it never feels troublesome, as the mouse still feels good in your hands.

It also comes with non-slip coating all over the mouse, making sure you always have a comfy grip on it. It also feels really good to the touch, which is always a bonus when you’re about to engage in hour-long FPS sessions. Speaking of usage, the Razer DeathAdder V2 Pro comes with DPI switches on the surface of the mouse, letting you switch its sensitivity to suit your tasks. Outside of gaming I find this is great for Photoshop, since you’ll also be able to get fine details on any images you’re editing better without the need for a stylus.

The Razer Focus + Sensor also makes sure the DeathAdder V2 Pro is functioning at its best. It allows the mouse to run at high performance, all with relatively low power consumption.

It also uses a unique Optical Mouse Switch, which uses a laser output to detect clicks. Compared to mechanical clicks this means a much more responsive clicks, and even Razer’s own website says this will prevent unintended clicks from registering.

Similar to the keyboard it also has multiple modes, so you won’t be locked into committing to one mode or the other. With the mouse its especially great for those of us with a “work” and “home” computer, since you can just set either one to either Wireless or Bluetooth, and just swap the settings on the mouse as you need them. Of course, what Razer Wireless Suite would be complete without a pair of headphones. The Razer BlackShark Pro is a lot more unassuming than the other gadgets in this list, coming in a very sleek black.

The earcups and band on these headphones are very comfortable, being soft enough that you could probably fall asleep listening to your favorite podcasts. The BlackShark Pro have a 24-hour battery life too, so the fantasy of dozing off on your recliner isn’t that far off.

If your music suddenly gets too loud and your phone is inaccessible, never fret. Because the Razer BlackShark Pro comes with controls on the side of the headphones, meaning you don’t have to take out your phone if you wanted to make quick adjustments. For added style, it comes in the form of a dial, further selling the retro fantasy.

It also comes with a 3.5mmjack, so if you live in a high-interference setup you can still always connect your headphones by wire.

I’m also a big fan of the shape of the ear cups, which are more pill-shaped compared to many modern round earcups. Aside from pressing less on your delicate ears, it’s also aesthetically pleasing since it makes you feel like a pilot.

Of course, they’re made of memory foam, with the same material lining the headband. In our own tests, we managed to go 4 hours wearing these with no issues, outside of our own testers getting sleepy. The headphones’ 260 gram weight is a huge part of its comfort, as it never feels like its weighing down on you. On to its actual performance as a pair of headphones, the BlackShark Pro comes equipped with TriForce Titanium 50mm Drivers, allowing the headphones to replicate a breadth of sounds across low and high frequencies. It also makes excellent use of a new feature, Game Profiles. This allows you to further customize your sounds, making it so you can change the headphones settings on a per-game basis. This is great for those of us with wide taste in games, who might want one sound profile for more tactical games like Counter-Strike: Global Offensive, with another more music-heavy for the rip-and-tear of games like Doom Eternal.

This feature, along with other customization options can be accessed via the Razer Synapse app.

One really cool thing about the BlackShark Pro is its detachable microphone. By all accounts, the microphone is pretty great, being able to pick up even the most subtle of noises while you game. Making it detachable solves one of my biggest gripes with built-in mics on headsets: that you don’t know what to do with them if you have no plan on using them.

Razer has crafted a pretty strong wireless suite for the average gamer. The fact that they have Bluetooth and wired options is also great for the consumer, since you’re not always going to want to commit to the same settings depending on your circumstances.

Personally, I’m a huge fan of the BlackShark V2 Pro headphones, with the BlackWidow V3 Pro being a close second. As someone who uses a lot of public transport, I really enjoy listening to music while I go out, and the idea of not worrying about tangling cables while I do it is a huge bonus for me. On top of that, it’s got good battery life, which means I’d seldom have to worry about the dreaded moments where someone is on the phone really loud and I have no music to drown them out.

It’s a great example of Razer’s usual quality, now made more convenient for all kinds of Gamer setups. You can get all three of these via the Razer store, or Razer’s authorized resellers.