It’s finally (almost) here: Little Nightmares 2 is on the horizon for the rest of the world, launching on 10 February 2021 for PS4 and Nintendo Switch, and 11 February for Xbox One and PC via Steam. The game will also be available on PS5 and Xbox Series X | S with free upgrades for those who have the last gen editions. We’ve gone through two earlier peeks at this suspense-adventure game, with some restrictions in place to not spoil the game ahead of time. You can check out our run-throughs of the demo here, and the early build here.

With that said, if you’d like to head into the game blind, play through the adventures of Mono and Six, and then come back.

“Return to a world of charming horror in Little Nightmares II, a suspense adventure game in which you play as Mono, a young boy trapped in a world that has been distorted by the humming transmission of a distant tower.

With Six, the girl in the yellow raincoat, as his guide, Mono sets out to discover the dark secrets of The Signal Tower. Their journey won’t be easy; Mono and Six will face a host of new threats from the terrible residents of this world.

Will you dare to face this collection of new, little nightmares?”

As fans of the previous game would know, Little Nightmares and its sequel in 2 is not one for straight-forward narratives. You’ll be following Mono across the locales, getting your glimpse of the big, scary boss, and then figure out how to get out of dodge. It can be hard to describe it, Little Nightmares 2 quite comfortably finding its place in that category of “for the experience” games. Without dialogue or plain text to tell you exactly what it’s going on, it’s up to you to pay attention to your surroundings to piece together the clues, immersing you in the shoes (or lack thereof) of Mono. Many questions will surely arise as you ponder your next move: all these clothes, but where have the people wearing them gone? Vicious traps with unidentifiable corpses, animal or human? There looks like there have been people whom we’d call “regular humans”, but has something transformed them into more sinister beings?

You can read all about our previous gameplay experience in our previous coverage here and here. Basically, besides running around the levels to find your route, the game will sprinkle the puzzles and stealth sections in between. Depending on how you feel about the frequency of checkpoints, retrying may or may not grind your gears. It certainly did for me, as during the demo, it turns out all it took for me to scoot past a chase sequence was to be that miniscule bit faster… 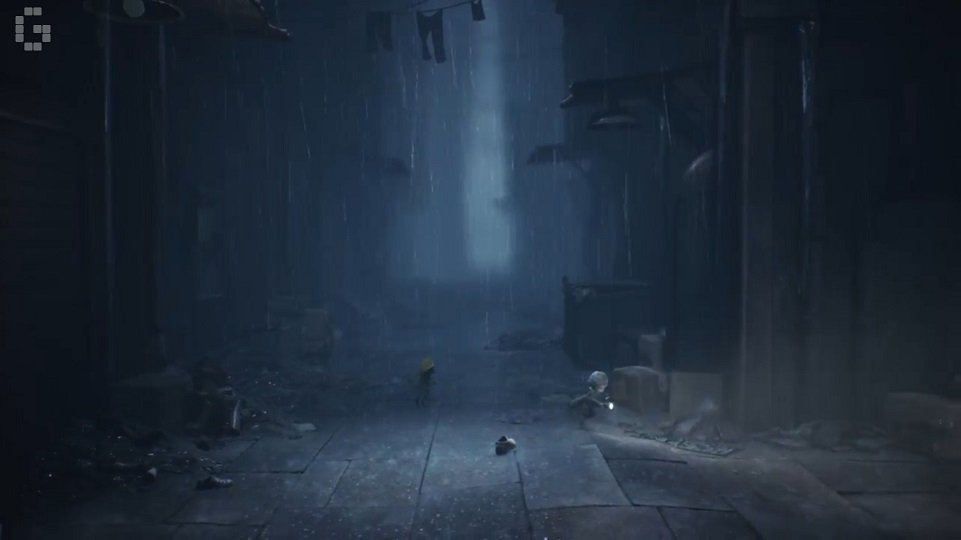 New to the sequel is the ability of Mono’s to wield a variety of implements to fight back the smaller enemies. Don’t go expecting some combo button mashing game with your sticks, ladles, steel pipe or what-have-you, but you do get a… fighting chance (hah!) against your foes. You could also take those tools to break down obstacles, making Mono that bit more proactive in his fight for survival.

Don’t forget you also have Six from the first game with you this time. You won’t be controlling her directly per se, but you can take cues from her to help you in puzzles. She’s able to boost you to higher areas, lift or move things you normally can’t on your own, and many other actions. It’s pretty incredible to see her jump on a piano to distract the enemy so that Mono can bonk it. You have the option to call out to her too. For the most part, just trust in her AI and have her help you as she knows where or when to move and won’t be actively disrupting you. Man, if only I could let the AI take over Mono too… Unfortunately, the climbing controls can be quite finicky, as I can attest to first hand. The perspective might make it a touch difficult to tell if you need to jump off or clamber round and can be a cause for unnecessary deaths. Presumably it should be much easier once you’re properly used to the controls, just something to keep in mind.

While Mono can take up arms against the smaller creatures, he’s still small and very vulnerable to the environment and of course, the level bosses. As with the first game, expect to die in a blink should you fail a puzzle, or make one wrong move in a stealth section. On the way to the big bad of the level, you’ll also face minor enemies. Plenty of opportunities for death! We’ll only be mentioning the first three levels of the game so as to keep some of the surprises for you.

The Wilderness will see you navigate past traps that will gleefully devour you. The Hunter is the one who has decided the décor of this level, though one wonders what exactly he’s hunting. With his double-barreled shotgun, trespassers will be shot at, and survivors shot again, with the light of his lantern marking his unfortunate victims. You’ll have to duck behind objects to avoid his gaze, but shelter will not last long when they shatter upon getting hit. Be fleet of foot, little ones… If you escape the Hunter’s clutches, you’ll have to attend the Teacher’s School, home to her and the Bullies, situated in the Pale City. Who needs eyes on the back of their head when you can extend your neck out like the Teacher? Should Mono make a noise, the Teacher will be alerted to investigate the area, and should you be spotted in the same area with Bullies, you’ll be made a target. The Bullies can be killed fairly easily, but they’re also fast and strong. Apparently taking a leaf from the Hunter, they too will booby-trap the School, so watch out for those loose floorboards. If you get your hands on a weapon, you can smash the Bullies’ heads in if you have great timing, as you need to get in close enough to land the attack. With Six in tow, you’ll head to the Hospital next, the second area in Pale City. He’s accompanied by his own minions, in both the Living Hands and the patients. Don’t be fooled by his large size, as this Hippocratic Oathbreaker can crawl up the ceiling and is quick to boot, and can sniff you out should you try to hide. The Living Hands can also be killed by Mono, but they too will also require some timing to defeat, requiring three hits with a weapon. Remember the mannequin parts you saw in the first demo? You’re right to be paranoid, as the Patients are made from those parts, pursuing our tiny duo in the dark. As this game’s take on Weeping Angels, they’ll freeze if you shine a light on them. Traps are scattered all over the levels, adding that layer of paranoia as you watch your every step. They can feel unfair when you meet your end by them, of course. There are hints to indicate their presence for the sharp-eyed, and even if/when you do die, the checkpoints are relatively close enough, and it also loads quite quickly.

As with any good design, the ones in Little Nightmares 2 does plenty to fire the imagination. Have the mannequins undergone some form of torture? How alive are they, really? How long has it passed since the first game? How much is it connected? Not helping is the sound design and music building up the tension, telling you what you should feel. The game’s struck a nice balance with the action and horror, so what will it be? Will the world consume you? Little Nightmares 2
Publisher: Bandai Namco Entertainment
Developer: Tarsier Studio
Release Date: 2021-02-11
GOG, Microsoft Windows, Nintendo Switch, PlayStation 4, PlayStation 5, Steam, Xbox One, Xbox Series X|S
Return to a world of charming horror in Little Nightmares II, a suspense adventure game in which you play as Mono, a young boy trapped in a world that has been distorted by the humming transmission of a distant tower.

The quality of the previous is maintained, with some additions to keep the experience fresh.