Berserk Chapter 364 released this week, which included a heartfelt message to fans from Young Animal, the publishers of the long-running manga.

The message answered several questions about the final chapter for Berserk- first off, that it was written based on Miura’s final manuscript, and finished by the team that worked with him at Studio Gaga.

Secondly, it also addressed the future of Berserk, saying there were no announcements to be made so far regarding the series. Given the fact that Berserk is almost universally considered Miura’s magnum opus and tied to his identity, it makes sense that the publisher wouldn’t want to announce anything for fear of trying to milk the author’s work.

It also features an ink sketch cover illustrated by the late Miura, as a tribute to the energy put into his work. 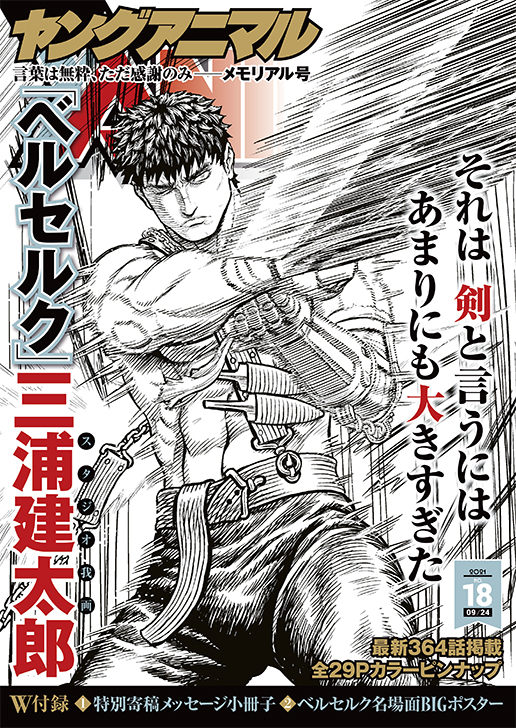 Here is the statement, in full:

We would like to take this opportunity to thank all of our Berserk readers for your continued support. The Berserk Chapter 364 published in this volume is the last work of the late Kentaro Miura. We were able to carry on the manuscript he left behind and publish this time thanks to the dedicated support of Studio Gaga members, who worked on Berserk with Kentaro Miura over the years.

Also, we are delighted to announce the latest release of the comic book this December. We thank all readers for waiting such a long time, especially, in the circumstances where information was unclear and ambiguous.

This volume also serves as a special memorial to Kentaro Miura as his last manuscript. We decided to use his ink sketch for the cover specially this time, hoping to convey all readers his passion, which is so strong and perceivable even from the ink sketches.

We hope that you will feel the devotion that he put into his work. In creating this volume, we have grown deeply aware of how big and powerful Berserk was to us, just like the Guts’ Mighty Iron Sword.

We are sorry to inform that there is no information to share about the future of the Berserk series at this time. One thing that we can promise you is that as Young Animal, the publisher that has worked with Kentaro Miura on Berserk, our first priority will be placed on him- what he would think if he were still here with us.

Last but not least, we have a message for all fans from Japan and overseas. We have read all the letters that have been sent in with great appreciation. We would like to express our gratitude to you once again for your continuous love and support.

Miura’s passing shook the anime and manga community, with many fans coming out to show their grief at the loss of one of the most iconic fantasy authors of all time.