Behind the veil of the realms, with Ashley Miller, screenwriter of DOTA: Dragon’s Blood

While admittedly my review for DOTA: Dragon’s Blood – find it here, with partial spoilers! – was lukewarm, it’s still a decently made romp for a quick binge with your buddies, and avoids tanking your MMR (probably). Prior and after watching the show, we had the opportunity to email Ashley Miller, screenwriter of the show, to answer sate some of our curiosity. Check ’em all out below! This Q&A also includes a spoiler section, so be warned! If you rather not be spoiled, then go ahead and watch the anime now, this interview will be waiting for you.

GamerBraves: Okay, boring question out of the way: why Selemene, and bring Dragon Knight, Terrorblade and Invoker into it?

Ashley Miller / AM: A lot of visual development of these characters was already underway when I came onto the show, although I stuck with them because I thought there were interesting stories to be told there. As for Selemene, I found myself very interested in the suggestion there was some other god before her and I wondered exactly what happened with that. Everything else was about connecting things.

GB: I’m curious: how much do you know of Slacks and his lore videos? What was the research process like?

AM: I watched all of his videos and I’ve gotten to know him over the last month or two. He’s a great guy, he loves his game and his passion for it is always on display. Watching Loregasm really helped me understand how things in the DOTA world connected, what questions had been answered and where there was room to play.

GB: What was it like working with Valve over the 2 ½ years?

AM: Valve has been a great creative partner and cheerleader through all of this. I’ve really enjoyed working with them and appreciated all the support they’ve given me.

GB: Would love to know how you see the community, or how involved you are in it.

AM: Because the project was so secret it wasn’t really possible for me to engage the community until very recently. I love how passionate they are and the artistic talent out there is just amazing. I’m constantly on the hunt now for fan art and I love to amplify those artists on social media.

GB: Was there any consideration for a live action show instead? What was the thought process opting for animation instead of live action?

AM: To my knowledge, the plan was always for animation. I’m not sure if a DOTA live action would be very satisfying. Doing it right would be insanely expensive.

if you're a brand new DOTA fan (or a seasoned veteran who needs to brush up on their lore), catch up on this incredible story that's eighteen years in the making. pic.twitter.com/wsRVQ2qok5

GB: How different is it writing for film compared to an episodic series, live action vs animation?

AM: Film is very closed-ended and your primary worry is structure. With television, you have a little more room to play it loose and focus on the characters and the emotions instead. The audience is less concerned with what’s happening than who it’s happening to. With animation, I just had to remember it’s hard to draw people walking and that crowd scenes are a nightmare, but I could open up the action and do things that would break the budget of a live action show.

GB: How often do you keep up with Dota in general e.g. competitive, patches?

AM: I keep my eye on it. I like to know what’s going on with the fans and what’s happening in the game. I don’t have any special insight on the patches, new heroes or any of that. Hoodwink was as much a surprise to me as anyone.

GB: I think after last year’s Dragon’s Dogma, some fans are on edge about art style choices for Netflix game adaptations. How do you decide on a visual look for a series when the source material is usually viewed top-down?

AM: I never had a concern about this show. Studio Mir is the best in the world at what they do. If they can’t do it right, no one can do it right. Everything else is about adapting the content so we can tell a story and treat it like drama rather than a video game.

GB: Let’s say you could work on another Dota anime: which story would you want to explore next?

AM: Let’s say if we’re successful and get to do more episodes I have very definite plans. I don’t want to set up any false expectations in the event I change my mind!

GB: What’s your favourite part of working on this project?

AM: I get to work with the most talented people in the world… amazing writers, artists, actors, musicians… how can it not be great to wake up everyday knowing this is my job?

GB: How is this different from adapting comic book material (e.g. X-Men, Marvel) to a game that doesn’t have that much supplementary material?

AM: Easier in the sense that I have more room to explore and invent. Harder in that I have less source material to pull from. It’s not like I can do DOTA: Days of Future Past. It pretty much has to come from my head or emerge from things suggested in the rather sparse and sometimes a bit vague or contradictory supplementary material.

GB: I know typical TV anime keeps roughly 30 minutes run time, but since the 8 episodes are available at once, why not have a longer runtime, or more episodes?

AM: Production. It takes a lot of work to do these episodes. The logistics — what we call the pipeline — would blow your mind.

GB: Dota is quite popular in non-English speaking countries, SEA notwithstanding. How much were you involved in the subtitling, to ensure it matched the base English?

AM: We sent Netflix’s localization team a lot of supporting material to help them understand the choices for names, dialogue and all that. But this is what these guys do and it seems to be working for them so far, so I’ve been more than happy to trust the process.

GB: Obviously you’d need a bunch of supporting NPCs. How did you create these additional characters without detracting too much from the mains?

AM: Every character on the show has a reason for being there. My point of view characters are Davion and Mirana, with a strong supporting cast. It can be tempting to put people in episodes or give them scenes just to give them scenes, but we simply don’t have the time or real estate for that. You have to be disciplined. In fact, the only major characters you see for the first two episodes are our leads. Everyone else comes in as needed and only appears as required. 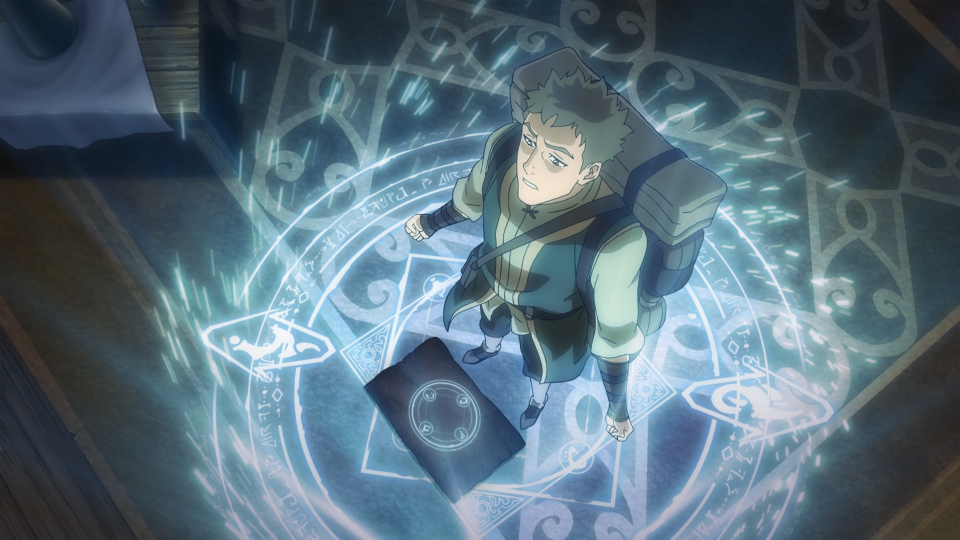 GB: Did Bram use a Town Portal scroll? Why did it need blood?

AM: We definitely nodded at the Town Portal scroll although the idea here is that the scroll is magic crafted at Dragon Hold from the remains of a void dragon. It needed blood and the ritual to work because I wanted to make it very, very hard to teleport from place to place or bypass a problem. The blood helps convey the idea that magic isn’t easy or free… especially when you borrow it.

GB: How did the Mirana and Dragon Knight ship come about?

AM: These are two very broken people who find each other at the worst possible time in their lives and prove to each other over and over that they can be relied upon. I think they see a lot of themselves in one another and I think there are aspects of the other they aspire to be. If that’s not a recipe for love, I don’t know what is.

GB: The Shopkeeper seems quite mystical, even if he only has a minor role. Can you elaborate on what he ‘represents’?

AM: The Invoker has knowledge, the Oracle sees the future, the Shopkeeper is the embodiment of karma and dharma. He is what you put out into the universe and what you receive back, and how you interact with him pushes you toward your purpose and higher truth.

GB: We see the other Eldwurms around, when Auroth (Winter Wyvern) should be the last once Slyrak is ‘dead’. How far exactly in the past does the story take place? Alternate universe?

AM: We posit the eldwurms are more than just creatures. It’s less a description than it is a title. I very specifically stayed away from making Auroth one of the Thunder, even though she is certainly old enough to be one of them. I hope we get a chance to meet her. As for where we are in time… my assumption is that all DOTA heroes appear on that final battlefield at once, but the Ancients don’t necessarily have to limit themselves to heroes who are contemporaneous; i.e., they can reach through time to find their representatives and even across many universes.

GB: Why the choice to have a humanoid dragon form, instead of say, a wurmling?

AM: The hybrid form was something that felt suggested by the lore and the way Davion is voiced and characterized in the game. I thought it was super cool and the hybrid humanized him enough that we as the audience could understand him as a “monster” versus just having a monstrous form. That said if you watch carefully, you’ll see Slyvion (as we call him) evolves every time he emerges. He has different designs in episode 2, 4 or 8. In fact by episode 8 he has wings. Every time, he seems to be a little less Davion and a little more dragon. If we get more episodes that evolution will absolutely continue. Who knows how far it will go? I have very definite thoughts.

GB: Terrorblade feels really under utilized, especially with the focus on other plot threads. Why not make TB more prominent?

AM: Terrorblade is like Jaws. The less you see of him, the scarier he is. Also, I hate shows where the villain pops up every episode and gets his ass kicked. When Terrorblade appears, he needs to make an impact.

With the release of DOTA: Dragon’s Blood on Netflix for the wider audience, you can make the judgment call if the review was too harsh or otherwise. Personally, I would be interested to see a follow up season, perhaps with more episodes to sufficiently encompass the cast and tie up the loose ends of their stories. I mean, a good anime for Dota can be an effective hype vehicle for a new hero, wouldn’t it? I’m not looking at Fym or anything…

Thanks to Ashley Miller for taking the time to answer our certainly not-comprehensive list of questions about the show, and to Netflix for letting us watch the show prior to its release. Hope you guys enjoy, binge the show, and settle in for the Singapore Major.