All with a beautiful OLED screen

The ASUS Vivobook Pro 16X OLED is here. In many ways, the latest Vivobook shares similarities with its immediate predecessor, the ASUS ProArt Studio book 16 OLED. The Vivobook is a stronger laptop for creators with higher performance and endurance to make sure software runs smoothly, as do many of the video games that you can also play on it.

Here is our review of this lovely laptop. We looked over its peak use, hardware, and how it manages a couple of games. The laptop’s outer casing or chassis feels similar to the previous ASUS ProArt Studio book 16 OLED. It has a nice matte finish, which reflects nothing, and is fingerprint-proof which is nice for something that most people will be carrying around.

Well, that’s supposed to be the idea, but this laptop is a bit on the heavy side. The height is 1.89cm and it weighs in at 1.95kg, giving it quite a lot of bulk. It’s not a deal-breaker but it does mean it might be harder to pull it out for use wherever you feel like especially on a train or bus. The keyboard is nice and quiet. It’s very similar to the keyboard of Studio book 16 OLED, which means their Numeric keypad layout is weird. While the Vivobook Pro 16X OLED has the ProArt Creator Hub, the keyboard doesn’t have a special key to open the app.

I must say though, I like the visuals of the keyboard, as there are different colors for different kinds of keys. The Escape key is the most striking one, as it’s bright orange, while some keys are grey in color, the black keycap is still the majority on the keyboard. The Enter key also has a nice thick stripe pattern on it as well. This all makes it easier to distinguish between the keys and therefore easier to type and learn to touch type with the keyboard. 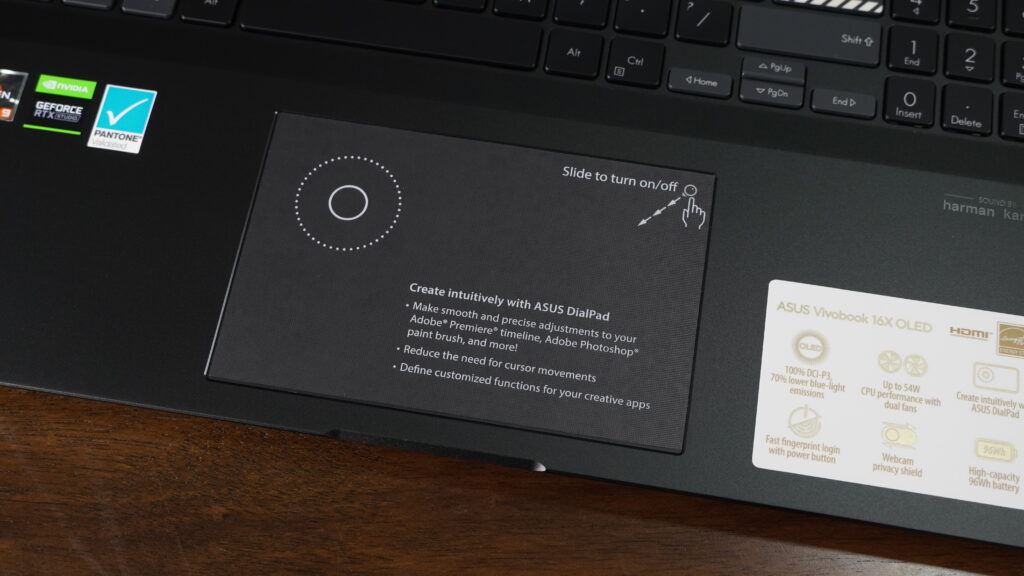 The touchpad for Vivobook Pro 16X OLED has a Dial Pad feature that works exactly the same as the ASUS Dial from Studio book 16 OLED, but now, the DialPad is hidden in the touchpad, and you can turn it on and off. You touch the top right corner, you slide to the middle, and it turns on/off. The best thing is that when it’s on, you can see the Dial Pad lights up.

You can of course customize the function of the Dial Pad in ProArt Creator Hub, it works just like the Studio book 16 OLED, just that it’s hidden and you can turn it on and off easily. It takes some time to get used to the DialPad though since there’s no feedback on how much have you turned it. Being an ASUS laptop, it comes with the ProArt creator hub. It’s basically the same thing as the one on Studio book 16 OLED, just without the special key. You can still customize a Task Group, you can still monitor your laptop’s performance, and you can still choose which mode you want the Vivobook Pro 16X OLED to run.

It’s a clear and accessible way to monitor the specs and functions of the machine that benefits those that wish the test the limits of the computer and its software. 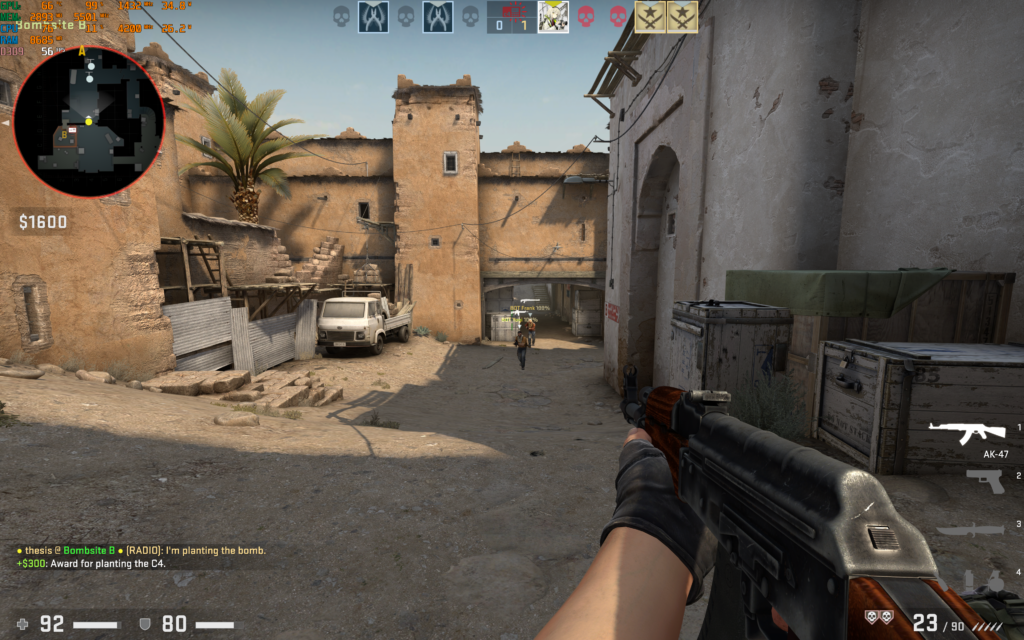 Vivobook Pro 16X OLED has a 16’’ OLED display, that supports 3840×2400 (16:10 ratio) resolution, 100% DCI-P3 color gamut, and HDR technology. It’s also validated by PANTONE for color accuracy, and it emits 70% less blue light. This means that staring at the display for a long period of time won’t be a huge burden for the user which is good for those that plan to use the laptop for long periods of time.

The colors are very good, the 4K display of the laptop really brings out the detail of the scenery of every image placed on the screen, it just looks gorgeous. However, it, unfortunately, is not anti-glare. Shine a bright light on it and you’ll see nothing.

The audio quality is quite good, the stereo is accurate, loud, and clear. Blasting music or movie at full volume also won’t have any side effects like static or tearing, and won’t damage the system.

The temperature of Vivobook Pro 16X OLED is pretty chill. You don’t have to worry about the system getting super hot when typing or on your lap. The Dual-fan system and the IceCool Plus technology help out a lot in this regard. Throughout the testing process with games, the CPU temperature never went over 80 degrees celsius, which is great for a laptop.

The battery life of Vivobook Pro 16X OLED is also really good. At 100% battery, regular normal usage will take 6-7 hours to bring it below 20%, and it charged back up in just 1.5-2 hours. It’s very good battery life for a portable machine that means that you can go long hours without needing to find an outlet.

In PC Mark 10 however, it’s scoring a 5,968 which is very very impressive. It’s definitely one of the best creator laptops in the market right now.

In order to test out the 4K OLED display, we decided to play each game at the 4K resolution setting. 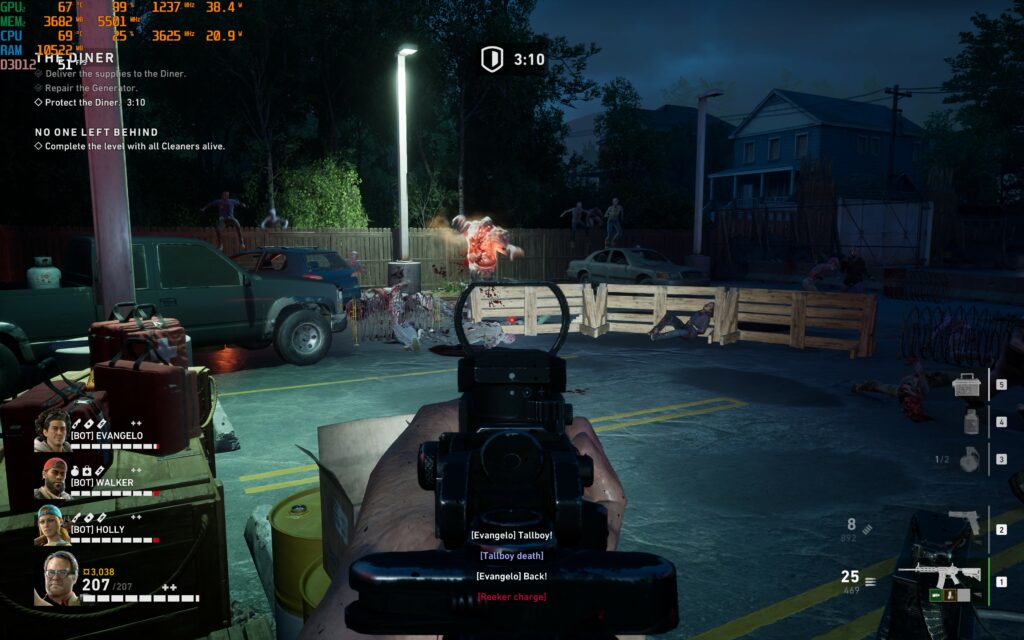 We first fired up with Back 4 Blood with the system-recommended high-quality setting, and DLSS focusing on quality. I thought I was gonna be fine until I loaded into a random stage. The frame rates dropped below 20, pretty much making it unplayable.

After that, I made some adjustments to it. I put the quality on low and DLSS focused on ultra-performance, and this significantly improved the FPS of the game. From previously running below 20 frames, it now plays at 50-60 FPS. By contrast with Back 4 Blood, Tales of Arise ran really well at the 4K max setting. The game was averaging between 70-90 FPS when in combat making it very smooth. The world looked good and the game loaded fast. At 4K resolution and with system recommended High setting, Counter-Strike: Global Offensive ran at an average of 50-60 FPS. It’s still playable, but I wouldn’t recommend it for competitive play. This is not so much because of the average frame rates but also the 60Hz screen making it impractical. Vivobook Pro 16X OLED is a strong contender for a good creator-oriented laptop at its price range. The performance of the CPU and GPU is really good, considering that it runs most games well at 60FPS. The laptop’s overall performance is great with its good cooling system and reduction of blue light. It was made for people that wish to put their computers to high use.

I especially loved how the DialPad was designed. It’s well hidden in the touchpad, and when you don’t need it, you can easily turn it off to prevent some accidental input. It’s just such a great feature to have.