A walk in the outskirts – Tales of Arise preview impressions

Tales of Arise is yet another of those games that have unfortunately slipped its original release schedule due to the ever present COVID-19 situation. Every industry has been affected, but fortunately for the rest of us, games can still come out, even if delayed. Arise will be launching to eager fans come 9 September 2021, and we got the chance to check out a slice of the game. As this impressions article is based off a review build, changes are still possible before the final product.

Let’s not dally any further, and dive right in.

The game has always looked gorgeous, and this preview is no different. It still uses cel-shading, but there’s this certain grain that lends to its more “realistic” look. Honestly, as long as it keeps the colour, I’m not objecting to the game’s style. The UI is pretty simple, for the most part keeping it clean. The various effects in battle gets really busy at times, and in between spell slinging, burst attacking and characters yelling, it can be A Lot. I would hope that you can tone down those effects further, and for the PS4 and Xbox One’s sake, not tank the frames too hard. The difficulty can be set to fit your style, and there’s this “Input Queue Time” that I find a curious addition. It’s not fully voiced, so I won’t pass comments on the voice work for now. Enemies are both clearly seen on the overworld, and are marked on your mini-map, so you can easily avoid them if needed. This one’s for you, speed-runners! They will appear in the exact quantity as you see in the overworld, unless later enemies can call in reinforcements, but we’ll cross that bridge when we get to it. They don’t typically aggro unless you’re pretty close, either.

There’s some little touches they’ve added to the game too, like how Alphen peers over the cliff at the clouds far, far below him when you stand at the edge. I’ll be hoping to see more of these character tics in the game proper. You know what’s also amazing? You can jump, sprint and swim in the open world!!! How amazing is that!!! Interactable stuff have this glow so you’re unlikely to miss out on any gathering. Here’s a few of the “newer” combat mechanics you’ll need to make note of: You’ll have your Artes Gauge indicated by diamonds under your character, with six Artes in total you can equip: 3 ground, 3 air. You have a pool of Cure Points that get consumed when using healing or support Artes, and does not refill post battle. In Arise, you’ll see support member HP as well, and they’ll be available to call in for Boost Attacks even if they’re not actively on the field. You can set Artes to be automatically used or excluded for AI-controlled party members. In the preview, menuing mid combat – which pauses the action – to slot in newly learned Artes is possible. Of course, you’ll be using your consumables through here if needed, though if you’re used to just spamming potions in combat, it won’t be possible here as you’ll be put into a cooldown before you can use another item. 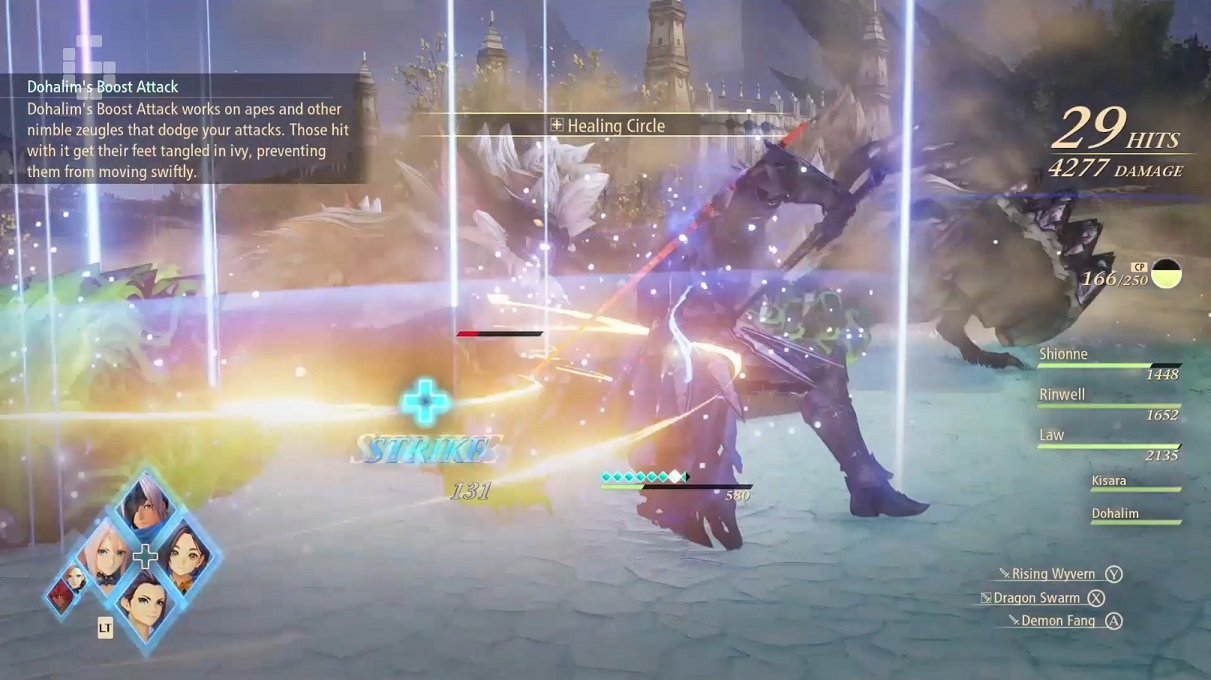 You’ll start out with a basic 3-hit combo string, and you can increase this limit later on. Juggling enemies in mid-air is an option, so I’ll hope to see other people do some fancy combo videos. For the truly Skilled, you can execute a perfect dodge and get a hit in. Enemies may have orange glowing weak points, so you’ll know what to do with those. While it’d be nice to save your Boost Attacks once an enemy is vulnerable, there are some really handy effects attached to them, so I figure you’d opt to just build up as much Boost Strike gauge for the big numbers instead. For the fashion conscious, different weapons will show up with different visuals. Otherwise, with regards to stats, you get to craft stuff like accessories from ore you get from mining points, with higher rarity ones having more sub-skills as you might expect.

I confess I’m not familiar with the Tales series, as I’m a primarily turn-based RPG player. The difficulty options are always welcome so that I don’t find myself running into a wall to progress the story, since isn’t that half the fun of JRPGs? I can’t say much of the story since the preview slice is removed of context, and who knows what they’d be changing for the full release.

Whatever the case, I’m looking forward to the title celebrating 25 years of the series.