by Kit
in All, Gaming Laptop, PC, Reviews
0

There’s been a certain push for thinner gaming laptops, and Acer isn’t lagging behind in introducing a new Predator Triton 500 model. Will it be good for gamers who want lighter machines yet still powerful enough? The Triton 500 definitely wants to be on your radar.

With the keywords of “thin” and “powerful” in mind, the Predator Triton 500 faithfully follows that in its appearance. It comes with a metal Abyssal Black chassis, with our review model having tasteful blue highlights around the Predator logo, the air vents and the WASD keys. The keyboard is silent and comfortable to use be in for work or play, responding well under pressure and responding as it should. The RGB lighting effects can be customized a little, but it doesn’t have the three RGB zones or is it particularly impressive in this aspect.

The machine comes with a 1080P IPS 144Hz panel of 15.6-inches, with a 81.3% screen-to-body ratio. It helps give the impression of a much larger display in this relatively compact package. The colours stand out well enough, with a pretty good viewing angle and is sufficiently bright. Unfortunately, it’s a little lacking on the ports, coming with:

To match the price tag, the Acer Predator Triton 500 is a more than capable enough gaming laptop, its NVIDIA GPU allowing it to play AAA games at their maximum settings along with ray tracing. Packing a combination of Intel Core i5-9300H, 16GB RAM DDR4 , 512GB SSD, and Nvidia GeForce RTX 2060, most of the newest games on the market should be able to run on Ultra settings without issue. The 512GB SSD is a little on the small side, unfortunately, considering how big said games are these days. 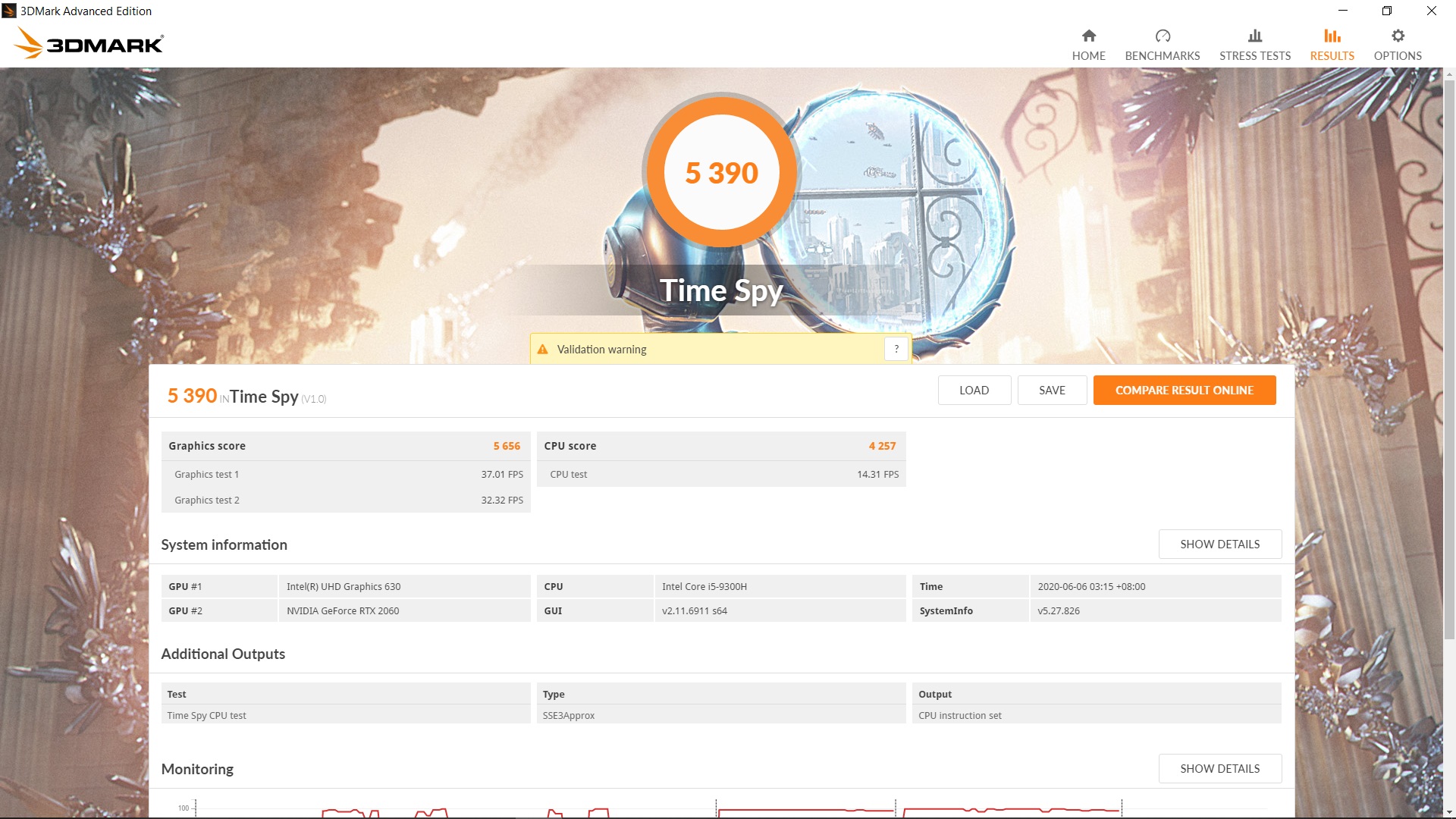 All these games ran without a hitch on the Acer Predator Triton 500. Even with ray-tracing and DLSS on for Monster Hunter World and Grand Theft Auto V, the machine kept at a cool 60FPS consistently, so you can really enjoy the graphics. Valorant isn’t the most intensive game, so the FPS could even shoot up between 90 to 144FPS, quite the overkill. From the benchmarks, you can expect at worst 60FPS even though the machine isn’t marketed as a super gaming laptop, which is quite a nice surprise. Overheating often can be an issue for thinner laptops since there’s arguably less space for the fans and vents, but the Triton 500 does not get overly uncomfortable and remains functioning at full capacity. The bottom might get pretty heated up, but I’d say that’s to be expected. It’s  enough to know that even with heavy rendering work, it’s not going to melt your desk. The fan sounds are usually pretty silent, but should you crank up their speed, then expect it to start getting noisy.

With the 5400mAh battery, don’t expect the Triton 500 to last any longer than 3 to 4 hours even with the battery optimization mode which turns off the RGB lighting and lowers the screen brightness. It’s pretty par for the course, so get your charger ready if you’re going to be carrying this outside.

Besides the whole hardware power, it’s supported by a bunch of software to make the complete package. With PredatorSense, it allows you to control the fan power, the keyboard lighting, display-related tweaks and many more, accessible via a quick shortcut button on the right side or through Windows. It also comes with Overclocking to give that boost in performance for the fan and everything else in general, with the Turbo button on the left of the keyboard giving you access at any time to power up. Turbo mode can also be tweaked according to your needs within PredatorSense. For the audiophiles, you can access Waves MaxxAudio to fiddle with the speakers and choose from various audio profiles. When you have on a headset and turn on the camera tracking feature, it utilizes the Triton 500’s webcam to boot Waves NX for a “3D audio experience”, detecting your head movements and accordingly adjusting the audio as though to fill a 3D plane.

In general, it’s hard to find fault with the Acer Predator Triton 500, being a great gaming machine with a few handy features built in, great speakers and powerful hardware. It may be a little nitpicky to complain about the less than fancy keyboard, but a shortcoming there seems pretty acceptable with the sheer raw performance it can bring at a RM6,399 price point.

Give us some support by subscribing to our Youtube Channel !
Tags: AcerAcer PredatorAcer Predator Triton 500
Previous Post

A summer in Hollywood to remember: The Crew 2