Revived Witch Closed Beta Impressions – Is it all just a dream?

Remember the RPG Maker games? Revived Witch‘s pixel art style has always given me that kind of feeling, and on trying the closed beta, that seems right on the money for me. No need to do much preamble, let’s just get into it.

As expected of a witchy theme, it comes with the fantasy trappings of mystical towers, mysterious forests, and animated fey creatures. There’s both static sprite art and Live2D for the characters, besides the pixel art for overworld or combat sprites. I’m quite fond of this art style, with Legend of Mana being one of my favourite games, no less. All the voices aren’t in yet as far as I’m aware, though I will confess I normally don’t play games with the volume cranked up. From what I hear, I think they’ll fit nicely in some For Work / Relaxation medley once the tracks are out. Since the game is about witches, expect the slew of female characters all of whom don’t necessarily fit into the typical “witch” design, not that it particularly matters. So long as they look cute, it’s all good. I simply have a preference for tacticool over fantasy garb. This extends to the story, where I find myself liking things closer to sci-fi, which is totally not the game’s fault. Besides that, the UI itself is pretty easy to understand, with any adjustments most likely to be for typesetting or localization.

Despite the fact that most of the game is pixel art, the performance is absolutely abysmal on emulator, and my dinky old phone also struggles. I couldn’t get the test build to install properly on another device I had, but I assume it would have worked better there. In any case, I wish the team good luck in the optimization process.

You get exploration, real time combat and a degree of base management, going through them in order.

Exploration will see you use the virtual joystick to walk around the map, finding helpful runes to help you as you run around, the occasional teleporter, maybe a fountain or two to replenish your HP, chests, and a variety of puzzle-solving. See what I mean by the RPG Maker reference? The hitbox for interactable items seems a little hit or miss at this stage. I can’t say I find walking around the map very exciting. It’s not because you can pretty much check the map as the areas are not obscured, in fact, I appreciate as such. There’s just not much to it, and I’m not sure how I’d want to improve that. Perhaps it’s partially because due to laziness. Completely obtaining all the chests do get you bonus items, but outside from that? Is there a reason I should go back, besides grinding? The problem I see is that the environments are nice, if linear, and I don’t envy the team trying to figure out how to make the maps more “appealing” when players like me can’t decide out what they want. While I thought it was turn-based, it’s actually more to real time as energy gradually gathers at the bottom of your screen for you to cast skills. Some enemies may have charge up times for their own skills, which you can interrupt. Bosses also can be “broken”, so wail on them once you’re all powered up! Characters come in several elements, but I don’t recall coming across the elemental chart. Likewise, what I assume an error in localization made me think that the characters have positions – front, mid, rear – but I think they just meant my characters weren’t levelled enough. I will also admit that I thought the first slot meant the front most unit, since there’s no indicator I might expect from Princess Connect, but it’s actually the third slot (closest to the enemy).

You can have a total of six units to a party, three in the front and sub-members replacing the unit in the same position. Later, you can have a friend assist in the seventh slot for their skill. There’s multiple classes as is usual, and if your formation is lacking something, the game will inform you as such. I think a clearer explanation of the “Charge” type skill, for example, would be beneficial. I just leave it on auto and hope for the best. Their HP also doesn’t restore after battle until you fully clear the stage, and any fallen units do not gain EXP. Slight bonuses – or additional flavour like voicelines – can be gained from raising affinity with them, gained post battle or with gifts. Units have skills you unlock as they get more powerful either from participating in combat or giving them mana, though this is a double-unlock as you need additional materials to obtain the skill. It looks like a typical skill tree, giving you access gradually as you unlock the previous node. There’s the Ascension to raise their level cap, then Evolve from the use of duplicates or with “tokens”. For the most part, evolving looks more like side-dressing. What I’d say is more important is equipment, most of which you’d probably obtain from your exploration. There are set bonuses, so get grinding. The base management is pretty simple; there are facilities with their own functions, where your units – or “Dolls”, as it were – have skills for further efficiency. Go off on expeditions, let them rest in the dorm, upgrade them, and such. 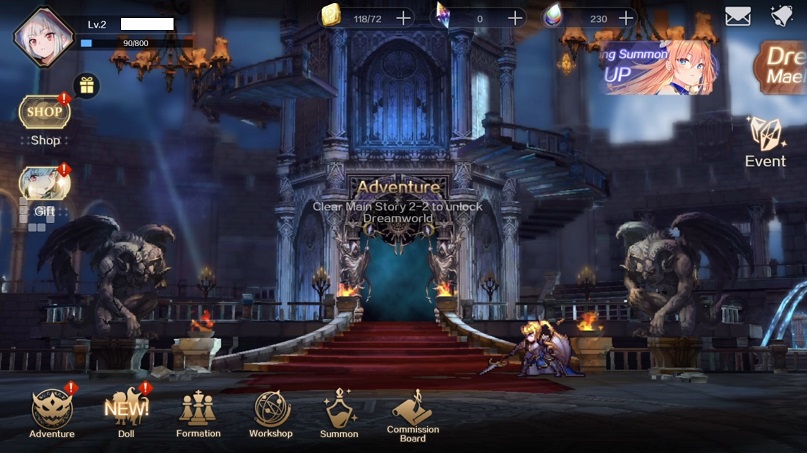 I think the auto battle is pretty alright, granted it’s hard to tell when the game is struggling to run properly. Some games include a Sleep Mode for when you’re doing auto-repeat, so that might be something to include.

The game can feel just slightly grindy, as you will need to clear a bunch of the story before you can access the other functions and/or game modes. Having friends being locked to clearing chapter 2-8 probably sounds odd to most.

A familiar sight from Arknights, units come in four rarities:

URs have a base 2% rate, which by now is expected, if on the lower end of the spectrum. What’s great is that a guarantee system is implemented, that works similarly to Genshin: wherein not getting the featured UR on the first “pity” will guarantee you the featured UR for the next one you get. The beta included a 50% discount for a 10-pull at 1000 currency, making 2000 the standard cost. At a rough estimate of perhaps 60 currency a pop on clearing story stages, it can give off the impression of being stingy at a glance. The game comes with an in-built reroll function, fortunately. For those of you who like to roll as many high rarity units at once as possible, the game warns you that should any UR be obtained, you will only get ONE from a select pool. The SSRs and SRs are free game, as far as I can tell. It’s limited to 100 tries, and also asks you if you really want to retry if you have already gotten a UR.

A unit is fully Evolved once you obtain 7 additional copies. Any further duplicates can be turned into shop currency to redeem items, with featured units or other materials available on rotation.

As established, my preference leans away from fantasy, so the story doesn’t hold me as much. I definitely do enjoy the pixel art style, while the regular 2D art for the ladies varies to my tastes. I set the one male character as my main companion just for kicks. There’s something here that will definitely benefit from more polish with better suggestions from the playerbase at large. If you’re nostalgic for the days of fan-translated RPG Maker games, do check out Revived Witch.