As a huge fan of Gundam Battle Operation, it was hard to not be excited to review Code Fairy. With Battle Operation 2 being a multiplayer-only shooter, Code Fairy was set to take its excellent mechanics and throw it into a single-player experience with charming characters and its own story set in Gundam’s One Year War.

For the most part, this episodic adventure delivers if you’ve already committed to Battle Operation 2 and were just looking for a new way to experience the game. That being said, no amount of anime gal pal fun times can hide just how mechanically obtuse the game can be, so definitely jump in with caution. Gundam Battle Operation : Code Fairy follows Alma Steiner, the newest member of the Noisy Fairy Unit- the all-girl Zeon unit serving under Kycillia Zabi. You serve under Killy Garrett, who fans of Mobile Suit Variations might recognize as having been mentioned in passing.

if you’re a first timer to Gundam, this is a great way to get into it- the squad members of Noisy Fairy are all charming women fitting a variety of archetypes, and I could see a world where Sunrise was planning an anime series based on the adventures of Alma and friends.

If you’re a returning Gundam fan though, it’s almost uncomfortable how light they play the girls of Noisy Fairy. It’s not the game’s fault- the overall tone of the game is light-hearted,and it’s not like Alma herself has personally dropped any colonies. But the fact you’re playing as the faction that wiped Australia off of Gundam’s map is almost laughable, especially when you remember how heavy-handed a lot of the Gundam series can be about its anti-war messages. Once you overcome that though, accessing the game’s story is great. The 2D sprites look gorgeous, and the game even has 2D animated cutscenes to really feel like you’re playing some unreleased Gundam spinoff anime. The voice acting is also great, too.

It should be noted that the story is being released episodically through a series of “Volumes”, with Volume 2 having just released. There’s not much to comment on the overall direction with Volume 1, since it’s mainly served as an introduction to the heroes of Noisy Fairy, hence why we’re not going into detail for this review of Gundam Battle Operation Code Fairy.

On a gameplay level, Code Fairy really excels by having its combat built upon Gundam Battle Operation 2’s framework. All of the intricacies are there- from the rock-paper-scissors of mech types to things like swapping out your weapon while your other weapon reloads. These are all things I personally love about Battle Operation, and really enrich the experience of piloting a giant mono-eye mecha into battle.

That being said, from the perspective of a newcomer, I can easily see Code Fairy’s gameplay being overwhelming. Unlike titles like the Gundam Extreme Vs series, it’s not by any metric flashy- you control like you’re piloting a 30-ton truck, which you are. You need to be decisive in your combat, and it’s clunky by design to make sure you learn this. One solace you can take is that Code Fairy adds character abilities, which do change the formula up somewhat. Most of these come in the form of buffs, while some characters like Mia can also heal your mech, something invaluable if you’ve ever played Battle Operation.

I really like this because it adds a focus to keeping an eye on your team- they’re more than just AI strawmen to push around, and it replaces the comms feature from Battle Operation 2. Still, it’s fun because you still have access to the unit skills unique to Code Fairy- making it the perfect midpoint between the two games.

It’s not all fanservice either, since you’ll need to complete challenges to get extra parts to upgrade your mechs. Again, depending on your thoughts of the game’s combat system, you’ll either love it or hate it. Personally, I loved any opportunity to check it out more, but if you’ve already been struggling with the game’s combat system having to suddenly do time attacks might be a bit of a tall order. Ultimately, It was great to review Gundam Battle Operation : Code Fairy. The game is a great way to get more casual audiences into a game system designed with very little mainstream appeal in mind.

If anything else I really like what it does for mecha games as a genre- unlike the more high flying exploits of games like Daemon Ex Machina and its progenitor Armored Core, Battle Operation is a proper boots-on-the ground title. Hopefully by ditching the multiplayer focus, Code Fairy can introduce more people to what is ostensibly a great ruleset- even if it takes some getting used to 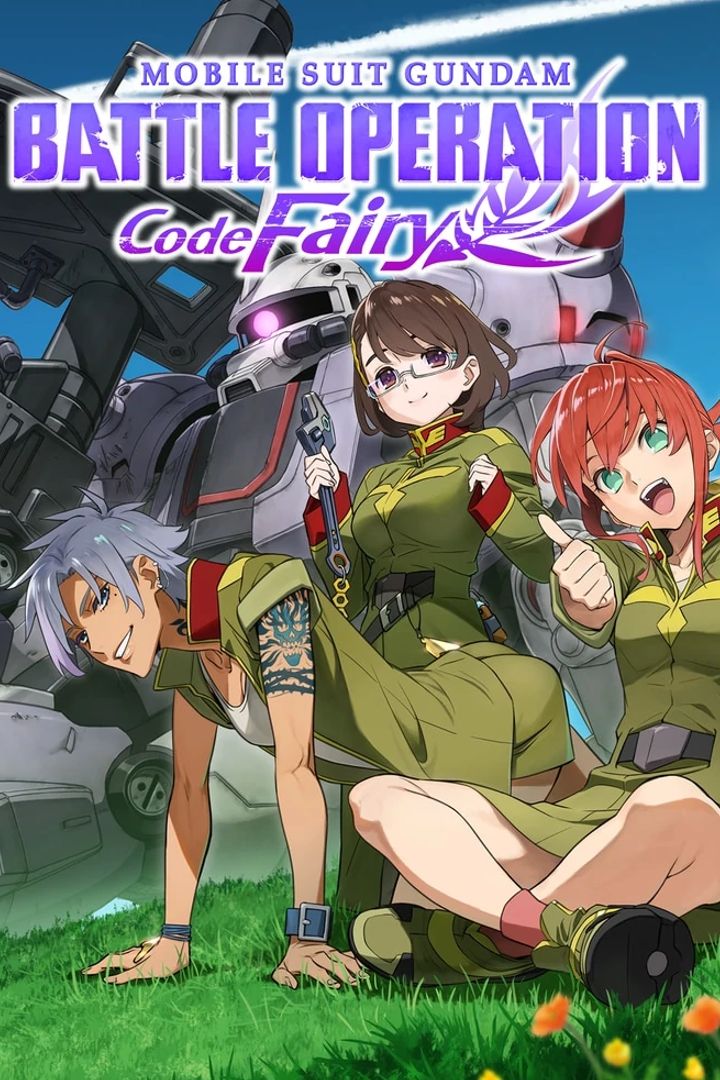 Gundam Battle Operation: Code Fairy
Publisher: Bandai Namco Entertainment
Developer: Bandai Namco Entertainment
Release Date: 2021-11-05
PlayStation 4, PlayStation 5
In order to break through the deteriorating war situation in the North American continent, the "Noisy Fairy," a secret unit under the direct control of Kycilia of the Principality of Zeon, led by Alma, is pushing forward in the "One Year War" against the Earth Federation Forces, which possess the White Devil. The soldiers take on the brutality of war and grasp the unshakable bonds between their comrades...