During the duration of this celebration, players enjoy a promotional login bonus. Logging in for 10 days gets players all the rewards. This supply drop pull allows players to make a 10 supply drop ration claim up to STEP 3 maximum, with each claim progressing from STEP 1 to STEP 2 to STEP 3. AIn addition, players can obtain one guaranteed MS from the lineup for every STEP! The STEP UP supply drop ration will end when STEP 3 is claimed During this period, the container find rate for all players will be 100%. After discovering 3 bronze containers, the next container will always be either a gold or silver container.

Avatar items, marks, and patterns will be given to all players in celebration of 3 million downloads for Gundam Battle Operation 2. A new feature for recruits, Directives, has been implemented. Players can get luxurious rewards by clearing the directives. The Start Dash event is a new feature for new players that offers a variety of bonuses, including increased rewards, for the first seven days of the game. After players claim all STEPs, the STEP UP supply drop ration will end. 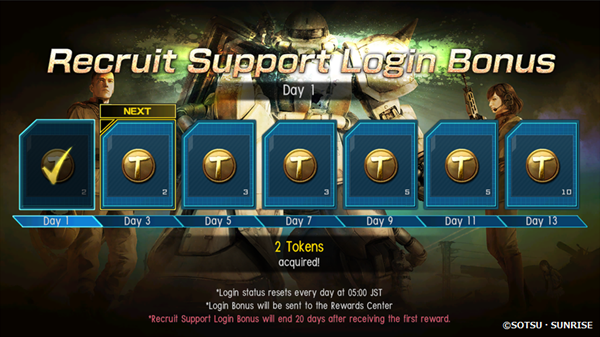 Players can get 30 tokens by logging in for 13 days out of 20 days from the day they start GBO2 from the New Recruit Support Login Bonus. Note that the bonus will expire after 20 days, even if players have not received all the tokens. After players clear the First Tutorial for the first time, players can access this special supply drop. One randomly selected ★★★Mobile Suite from a specific line-up will be given to players. Anew unit, the ★★★GEYMALK will be available for a limited time.

For more details about the ongoing events, visit the game’s website.