The Fire Emblem franchise is considered to be one of the more well loved titles in Japan and it shows that the mobile game – Fire Emblem Heroes has made 146 Million USD more in lifetime revenue compared to the US counterpart, who are the second highest in terms of revenue.

According to the data on AppMagic, from the cumulative lifetime revenue of 759 Million USD over the 5 years that the game has been out, Japan dominates the chart at over 401 Million USD while the US trails behind at over 255 Million USD.

This might not be a surprise to much given the franchise’s recent surge in popularity ever since Fire Emblem Awakening was released on the 3DS which sparked the revitalisation of the franchise, and the even more so Fire Emblem Three Houses, where the game has sold over 530k copies in Japan alone, back when the game was released according to Nintendo’s 2019 financial report.

Perhaps one of the merits of Fire Emblem Heroes being a successful mobile gacha game would be that it’s ties being under such a big named IP. As well the game’s relatively generous gacha focus rates, from having normally a base 3% focus rate on standard banners and going as high as 8% with the game’s Legendary and Mythic Banners, coupled with its easy to farm summoning currency just from playing through the game.

Going back to the revenue comparison between Japan and the US, what’s interesting to note is that despite having more user downloads in the US, having a difference of over 1 million users, Japan still manages to top the charts with its revenue being around 1.57 times more in comparison.

One of the most notably disparities between the two would be when the game’s initial launch way back in February 2017 where Japan has triple the amount of revenue compared to the US with the former having over 24 Million USD and the latter with over 8 Million USD. 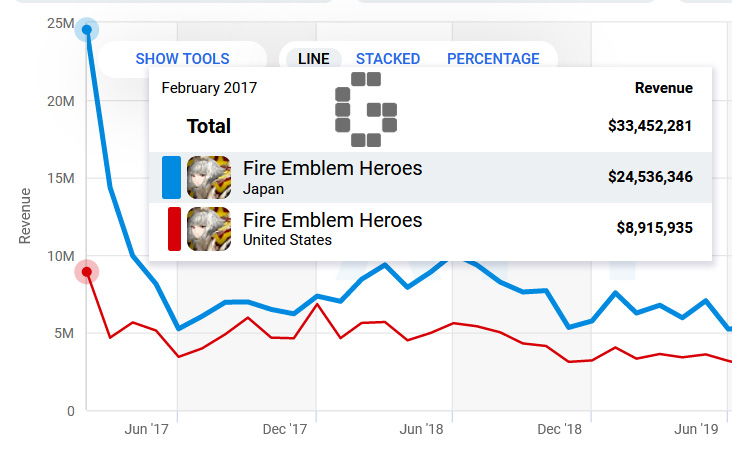 Possibly one of the reasons to why Fire Emblem Heroes is such a popular game in Japan would be its element of having a roster of characters ranging from previous Fire Emblem titles coming into one game. As well as providing fans with fan-service by giving popular heroes various of alternate versions to a character, one of the most notable one being Lyn who has 7 different alts, 8 if you include her base version.

Fire Emblem Heroes is a free to play tactical role playing game developed by Intelligent Systems and published by Nintendo for both Android and iOS.