Developed by The Wandering Band LLC comes their latest free update for the Airborne Kingdom titled the The Lost Tundra which adds in a challenging new biome to the game.

We’ve previously covered the base game before and if you’re interested in checking that out, you can do so over here.

To those who are unfamiliar, Airborne Kingdom is a sky city builder where you have to manage and build up your airborne kingdom, all while you set out to collect resources and recruit workers to keep your kingdom in the skies. The overarching plot for Airborne Kingdom is that you are set off to unify the twelve ground kingdoms and bring peace to the world once more.

The Lost Tundra is a free new update for Airborne Kingdom which adds in a new biome, new buildings and new story to the game as well as other Quality of Life features. Returning players will need to reconsider everything that they’ve learned thus far in order to stay afloat.

While The Lost Tundra is accessible to players early on into the base game, but the developers have recommended that players should complete the campaign beforehand because I can tell you this that it’s pretty challenging if you don’t take the necessary preparations before setting off to the new biome.

As the name suggests, the new biome that the developers added into the game is a snowy Tundra region where the cold weather is harsh and unforgiving for those who lack preparation in terms of resources because one of the main challenges for this update is the weather and how it’s able to affect your buildings.

To get to the new region, players with a previous save file will get a message prompt indicating that the update is loaded in for you. The Indicator gives players a brief description of the lore and also some hints of the things that you need to keep in mind if you’re planning on traveling to the new region. The things you have the keep in mind are that a lot of your buildings will be affected by the weather, so you need to maintain your kingdom’s Lift, Propulsion and Resource production buildings so that it won’t hinder your progress.

On top of the weather, players will need to stock up on Coal, Water and Food before heading off to The Lost Tundra as there won’t be any of those deposits available. So like a squirrel storing nuts in its mouth for the winter, you’ll need to stock up on those resources before it runs completely dry during your travels in the new region.

Once you’ve made sure that you’re all stocked up on the resources that aren’t available in the new region, you can head up to the far North part of the map where you should be able to see an entire region covered in white. While you’re still able to travel back to the previous regions if you need more resources, I wouldn’t really recommend it because the trip back can be very long and tedious.

From first glance, the new area is pretty big so there’s tons of stuff for players to explore and enjoy from this free update. Once you head far North and see a desolate plain covered with ice, you’ve reached the Lost Tundra. The moment you step foot (or fly past considering you’re up in the air) in the new region, the game will once again notify you about the harsh conditions of The Lost Tundra and how it’ll affect your buildings. At the same time, if you look around, you should be able to find a small campsite where it turns out to be a Frozen Encampment where they’ll give you a quest to find the lost explorers who went out to hunt for treasures but have not made their way back home. This is how players will be able to start off The Lost Tundra questline and get access to one of the most important buildings for this update – The Furnace. The cold weather will be a mechanic that is present only in the Lost Tundra where it will affect the overall efficiency for most of your buildings. The game will show if the player is under the effect of the cold weather from a visual indicator where the icons at the top of your game UI will turn light blue and have a snowflake icon over them.

There’s also a meter below your coal reserve that shows the different levels of coldness. The deeper you travel into the Lost Tundra, the colder the temperature will be and thus decreasing the efficiency of your buildings even further.

Bring Back the Warmth

To combat the challenges in The Lost Tundra, players will need the help of the Furnace. With the cold weather making your buildings less effective, the furnace is there to go against the laws of Mother Nature by making the buildings be back at maximum efficiency.

The blueprint for the Furnace can be purchased from the Frozen Encampment for 5 Relics and after researching it through the Academy, you’ll need a total of 10 Wood, 5 Glass, 5 Adobe, 5 Iron and 4 Active Workers for each Furnace. The Furnace will provide heat in a circular area and will affect the buildings surrounding it. But with how the furnace will only affect the buildings surrounding it, you’ll need to plan beforehand on the placement of each of the production buildings in order to fully maximise its effect as well as avoiding spending more resources for any unnecessary placements as it does take up quite a bit of resources and the lack of Wood in the new region will make things harder than usual.

Since I was reusing an old save file to play through The Lost Tundra, the placements of my buildings weren’t taken into account of that so I had to spend a lot of time just to rearrange the placements by moving buildings and destroying pathways so that the important buildings are clumped up and be in effect of the Furnace.

Once you place a furnace down, there will be a visual icon of a thermostat where the buildings affected by the Furnace will show an orange colour while buildings that aren’t affect by it will stay light blue. 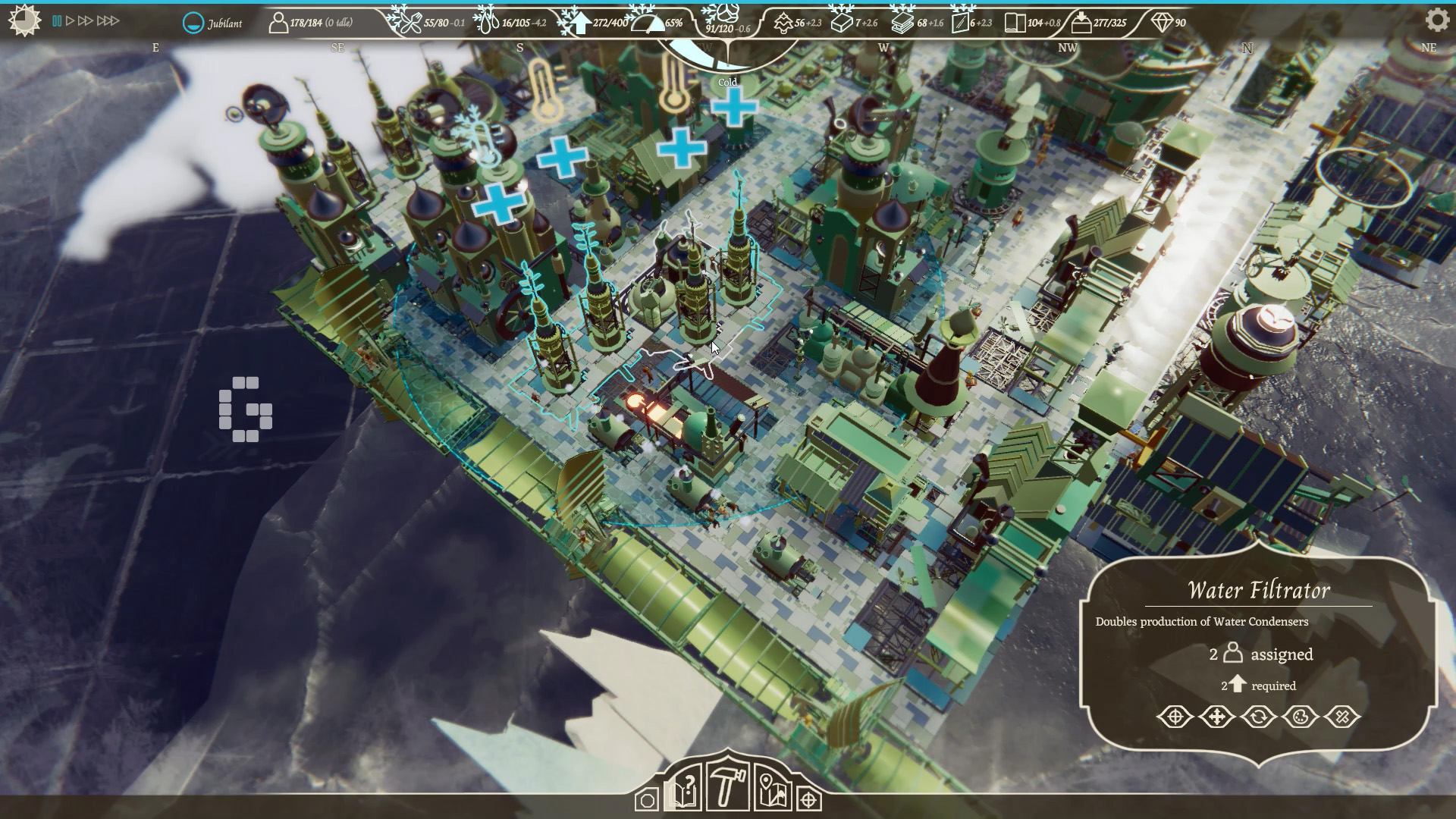 Along with the new update comes a handful of Quality of Life improvements to Airborne Kingdom, first of which is more customisability for your flying kingdom, where you’re able to change the overall theme, the metals, the lights, the walls and also the floor tiles of your kingdom.

And while the customisation is limited to the presets within the game, there’s still a hefty amount of them to look through. This doesn’t affect the gameplay whatsoever but it definitely doesn’t kill you to be stylish and it also allows players to give their own personal flair in the game. There’s also four new buildings under the “Wonders” tab, those being the Sapphire Crane, Ruby Hawk, Topaz Owl and Emerald Dove. Having these will only unlock new customisation options. One of the feedback that was given for the base review of the game was the game wasn’t as difficult compared to other sim / strategy games. But on top of the new region, Airborne Kingdom also adds in a new Hard Difficulty of the game.

Another mode that was also added into the game from the free update is the Creative mode. As the name suggests, it give players a sandbox feature for them to check out all the buildings and customisation options since they’re all unlocked and you don’t have to worry about the inhabitants and their needs. All in all, the new Lost Tundra update for Airborne Kingdom is perfect for those who seek a challenge when playing through the game. The overall environment of the Lost Tundra perfectly encapsulates the barren and desolate lands as well as giving the game a lot more depth in terms of gameplay with the addition of the weather mechanics as well as the addition of the Furnace.

Free DLC For Airborne Kingdom: The Lost Tundra is Now Available On PC

Free DLC For Airborne Kingdom: The Lost Tundra is Now Available On PC