Following the demo for SD Gundam Battle Alliance, the tiny robots are now fully playable for Gundam fans to sink their little Joy-Cons into. You can check out our demo impressions here, as we dive right in to the full review.

The excuse story places you in the commander seat to be transported into a simulation known as the “G-Universe”, with the responsibility of “fixing history” on your shoulders. Here, you’ll be able to come across the entries from the staggeringly large franchise, which should appeal to the True fans. There’s some dialog options that serve to not make you a complete blank slate. 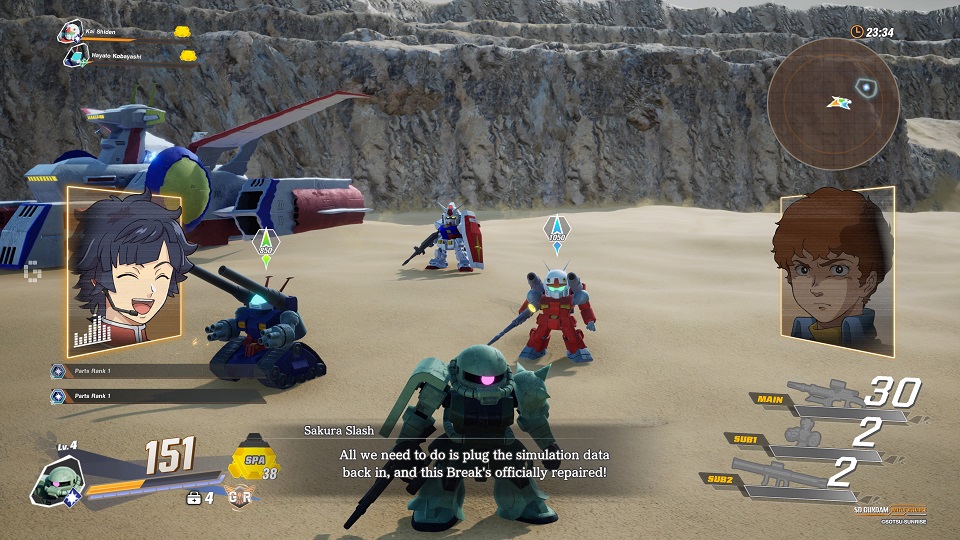 Battle is certainly the primary attraction in this action game to let you play around with the variety of Mobile Suits across the franchise here. You will have some to start, while the rest are “developed” by yourself. This development comes in the form of blueprints to be found in levels, so check to see which ones drop a particular type.

Mobile Suits come in three flavours: “Infighter”, “Sharpshooter”, and “All-Rounder”, each naturally having their own roles or skills. Activating skills require consuming skill bars that will fill up in battle. Infighters are immune to stuns, Sharpshooters reloads all sub weapons, while All-Rounders decrease the time for all your actions. It makes me feel like All-Rounders would be the best, but hey, that’s just me. All MS have the ability to do melee attacks, with the actual damage numbers reliant on their type. There’s added complexity in that each MS has their own sub weapon which takes time to reload so as to not spam them. Certain MS definitely have their specialties: even if melee seems to be king, ranged ones will have their uses. You can’t 100% count on the sub weapons as they’re not guaranteed to be ranged. ALL movement consumes stamina, which doesn’t appeal to me. Refilling it requires you to plod along or standing still which isn’t something you would like when you’re executing some combo and whoops, you don’t have any more stamina because your MS is a noodle apparently. I suppose blocks will help in avoiding damage but you’re encouraged to do a perfect block so as you don’t cut into your block resource. It doesn’t refill your stamina even if you’re just standing still either. The block isn’t always necessary, of course. I’m just bad.

Speaking of kickass combos, you can do air combos which also deals more damage! And consumes more stamina! So much for being cool. With the stamina consumption in mind, the try-hard combos are best left for bosses, which can’t be punted into the air until they break. It’s about applying steady pressure, which makes it sound like Sekiro. Unlike Sekiro, they’re far more liberal with the visual effects, so high skill executions aside, I can’t even see anything…

Now that you’ve gotten some Mobile Suits, it’s time for some upgrades! Parameters to improve are HP, Boost, Melee and Ranged, which can be further worked on once you collect parts to unlock another column. MS level can’t exceed your character level. You might want to spread out your upgrades so that you can have a decent variety – or at least one melee and one ranged – to tackle levels. Even though the repetition has been reduced in the actual levels, you will need to go back and replay them to collect points for upgrades. You can “take back” upgrades you’ve done on a particular MS, which converts them into Tune points. There is a slight caveat in that Tune points can only be used on the same MS. Further buffs can be obtained from equippable items and skills, which you can find as drops from levels. Skills are equippable from character level 15, and are tied to your character and not the MS, so some room to experiment to suit your own playstyle. You’re also able to compare Mobile Suits with one another, if you need to check something or other.

I like being able to bring on two AI partners, and they’re not locked out from using the same MS as yourself. They’re also helpful in providing buffs, and they level up as you use them more. That said, the AI aren’t great for boss battles. While you can revive them, this process cannot be interrupted and must be restarted if you’re forced to move to dodge. In this way, the AI feels more like a crutch, and not the most reliable one. Can’t really exploit the environment either since they’re primarily set pieces that can’t be interacted with.

Unfortunately, the novelty of the battles can wear off quickly. Once again, despite them off-setting the degree of repetition, it can still feel samey after a while. The most fun comes from finding blueprints to add some spice to the fights. I can acknowledge it’s partially a skill issue when it comes to balancing the stamina use to move and, you know, actually fight. It feels clunky and makes the action grind to a halt when you run out at a crucial moment. I can see this as some kind of immersion since I imagine Mobile Suits aren’t actually that mobile, but still. The game can also benefit from a training room to actually test out these combos since battles can get far too hectic to properly benchmark. I think it’ll be a good opportunity to properly admire the sheer amount of details they’ve put in for these MS too.

As it is, it’s not too bad a game, which could use with some tweaks.