Welcome back to another preview of Rainbow Six Extraction! Do check out our first one here for more information, as this one will be clarifying some things and discussing aspects previously not included.

For the uninitiated, Rainbow Six Extraction is a spin-off of Rainbow Six Siege, and is instead a PVE only title over the competitive FPS of the latter. You’ll be able to form teams of three, utilizing Operators from Siege to complete your mission. This second preview has not changed up the mechanics and enemies much, though it does offer more details now that I’m more familiar with the title. As a note, the playable build is still essentially a demo, but it’s much closer to the final version at least. Below are the breakdowns of several gameplay features:

Nine are offered from the start this time, with six more unlockable as you get your account to level 10 for a total of fifteen. It won’t be too far a stretch to assume more will be added over time, since Siege has plenty of them to choose from. This, in tandem with raising an Operator’s individual level, I can see being a relative grind. Operators can get more unlockable stuff as you level them up, from improved skills, to stats, or weapon choices. Their health will still be carried from game to game, and recovers over time. It encourages you to play other Operators to allow the others to heal up, though I do wonder how much they can regenerate if you’re managed to exhaust them all in quick succession. You’re locked out of an Operator if their health drops too low for a new mission, see. With the random nature of objectives, me playing someone I’m unfamiliar with could potentially hinder my teammates. 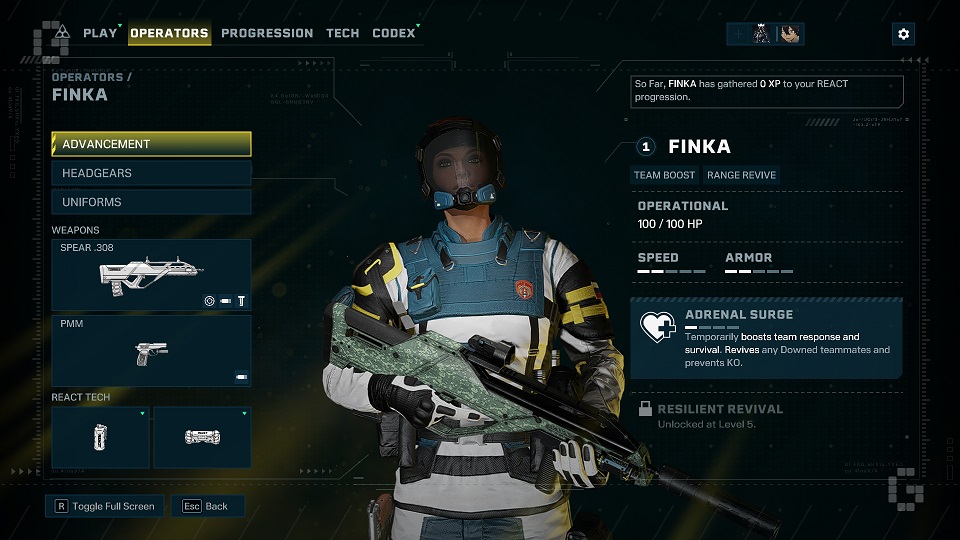 Much like the previous preview, Operators who have their own healing skills remain invaluable, due to the scarcity of healing items on the maps. Protect your Doc or Finka! Another thing to note is that these Operators have their own Speed and Armor stats, which are pretty self-explanatory. Doc’s gonna be “sprinting” at Speed 1, to Ela zooming around at Speed 3. Armor is simply their defensive stat. These are your utility items, or gadgets, if you will. The first preview only gave access to the smoke grenade and the recon drone. With REACT Tokens, earned from levelling up your account, you get to unlock more of these, available in Explosive and Gear flavours.

For the most part, these are also quite easy to understand. Explosives cover the things that go boom (e.g. the smoke grenade), while Gears give access to more, er, utility items (e.g. recon drones). With the choice offered to you, the loadout will come down to playstyle or your chosen Operator. Lion or Vigil can already gather intel, for example, so I’d opt for something else instead. You can’t unlock anything new if you’ve started a game or from the loadout menu. Can’t wait to have my occasional absent-mindedness screw me over, leaving me with only basic unlocks if I haven’t taken the 5 seconds to go to the Tech menu. It be like that sometimes.

Just to clarify certain tasks you might get, namely: Rejoice, as loadouts are definitely in the game. Aside from REACT Tech, you’ll get to choose your primary and secondary weapons. There IS a caveat, as each Operator will come with a predetermined pool from which you select from. Doc’s options, for example, are limited to the SG-CQB, MP5, P90 and HK417, and the rest of them will have their own limited picks. As for parts, these also vary from weapon to weapon. As examples, the only modifications you can make to the SG-CQB are for the scope and grip, while Ela’s Scorpion Evo 3 A1 has choices for scope, grip and gun barrel.

The random nature of missions is also what makes Rainbow Six Extraction replayable to me, as the rogue like enthusiast. Four areas, each with three different maps, and three blessed difficulty options means I can spend a lot of time grinding it out. Grinding it will be too, since the other areas are locked behind progression. 2 1/2 hours for roughly five games is enough for a Milestone 4 account level, still a far cry from 10. I would say that Milestone 4 is decently significant still, unlocking not only San Francisco as a playable area, as well as the Maelstrom Protocol mode. The latter is a weekly challenge mode with tiered ranks, and accordingly, is one of, if not THE most difficult content you can challenge at this stage. Progress as far as you can with your buddies using a fixed selection of six Operators a week, carrying the same loadout as the other gameplay modes. If an Operator is inactive from your earlier sessions, they will be unavailable here too. You’re also required to have at least three Operators from the given selection to be healthy enough to even try the mode. As previously acknowledged, Rainbow Six Extraction can be on the grindy side. Everything is essentially locked behind game time for any progression, so a fresh player is not going to have much. Fun though it may be, 2 1/2 hours is a decent enough time investment for just a new area, and Maelstrom Protocol is hardly something I will always get a stack for. Perhaps it just needs some tweaking for the progression speed, and sure, I could go for a few PVE rounds. Until then, I’ll wait and see how the game actually works in a live environment. Rainbow Six Extraction
Developer: Ubisoft Montreal
Release Date: 2022-01-20
Epic Games Store, Microsoft Windows, PlayStation 4, PlayStation 5, Xbox One, Xbox Series X|S
The Chimera parasite that caused an Outbreak in New Mexico has suddenly reappeared across the US, deadlier than ever and spreading rapidly. To prepare for any future threat, the Rainbow Exogenous Analysis & Containment Team (REACT), a highly specialized and outfitted organization was created.​ As a hand-selected REACT Operator, it is your mission to confront the mysterious creatures known as the Archæans.
Tags: Rainbow SixRainbow Six ExtractionTom Clancy's Rainbow Six ExtractionUbisoft
ShareTweetShareSend
Previous Post