Mobsters and high fantasy. These are two themes that have captured the imagination for decades- and met with a grand union via the Streets of New Capenna set for Magic: The Gathering.

In this set, crime families, each sporting their own unique identity and, more importantly, totally legitimate business. From the mystical Obscura to the bruisin’ Riveteers, there’s plenty to love with the new set.

We caught up with Lauren Bond, Creative Producer for Magic The Gathering: Streets of New Capenna as well as Dawn Murin, Senior Art Director at Wizards of the Coast to talk all things demon mobsters in this thrilling new set.

Lauren: Any time we revisit a color grouping in a new setting we always want to think about how we set them apart from the previous expressions. For example, what makes the Riveteers different from Jund? Tri color definitely gives us a lot of space to play, and really explore new aspects of each color’s mechanical and narrative identity.

With a game as entwined with its narrative as MTG, could you share whether the concept of the five families was developed from a gameplay perspective first or from a narrative angle?

Lauren: In Capenna, our game design and worldbuilding were done alongside each other. It was a collaborative give-and-take that the team did to arrive at the most fun and flavorful outcome. For example, one of our worldbuilding designers proposed that the Caberetti be all about throwing parties and group gatherings which became a jumping off point for creating their mechanics.

Could you talk about how you and the Art Directors managed to make a uniquely Magic take on Art Deco?

Lauren: When designing a set we have a lot of early concept work, and then later a larger “concept push” where we generate visual assets for the setting that will be used when creating the card art. For Capenna, the concept push partially focused on creating distinct looks for each faction, exploring different fashions of the era and different ways of visually interpreting art deco.

The very original high-level pitch for Capenna was “demon mobsters” which really became the jumping off point for creating the world. While we’ve really fleshed out and developed the setting in a lot of ways it still is our “demon mobster” set.

Lauren: It’s always a bit of a give and take, but with the volume of cards in a set we do get some space for top-down designs for individual cards based on tropes people would expect, while still having enough to establish a complex world.

One of new Capennas lesser talked about design features was the weapons based on musical instruments. Are there any in particular that were your personal favorites?

Lauren: The designs are all really fun, I’m not sure I can pick a favorite!

Of course, Lauren wasn’t alone in answering our questions. Dawn Murin, Senior Art Director at Wizards of the Coast also took time out of her busy schedule to talk about the art surrounding Streets of New Capenna.

Between film, paintings and music, which would you say was most important as references for nailing the tone of New Capenna?

Dawn: Art Deco and Nouveau were the key inspirations for the environment and costume design language. The history of organized crime in the U.S. was a big source of inspiration for worldbuilding. Of film, music, and paintings I’d guess film & TV (ex: Godfather, Sopranos) was the primary driver of those three.

Similarly, can you name any artists who just really shone once they were assigned to the set? Alternatively, were there any artists that you knew you had to work with for New Capenna?

Dawn: There were a lot of standouts in this set that are both well executed and capture the spirit of this world setting. Here are some examples: Rogue’s Gallery and  by Matt Stewart 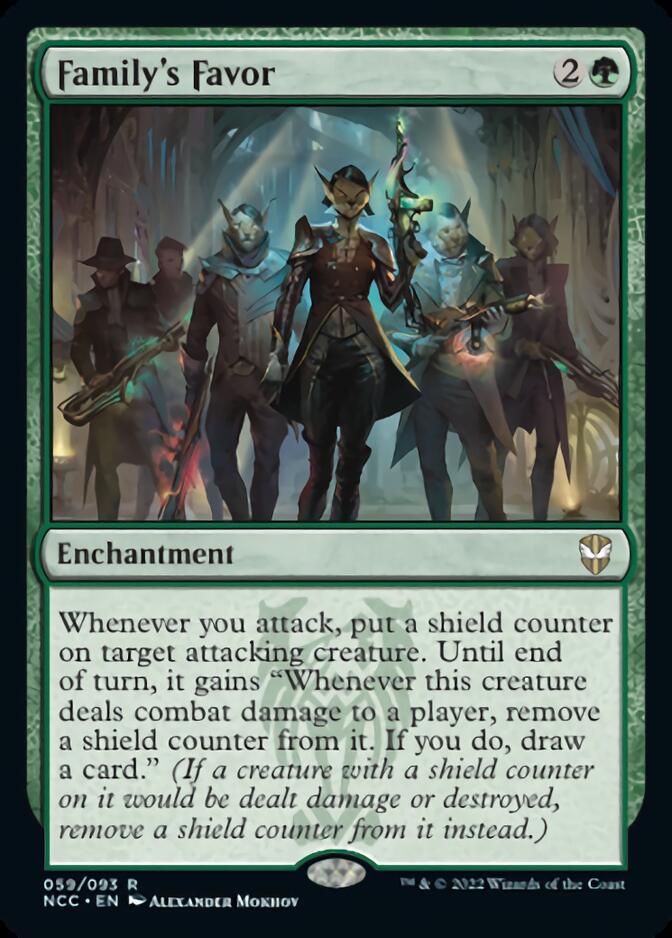 Riveteers Ascendancy by Svetlin Velinov is a fun nod to that famous photograph of the workers lunching on an I-beam high above New York City.

Shady deals, persuasive offers, and most importantly, monsters and magic- these are all core parts of the Streets of New Capenna experience. The set’s available now to check out, so you can pick your favorite crime family and start building your own deck around them, or even trying one of the commander decks and playing with all your friends to start an all-out Gang War.

Our thanks to Lauren and Dawn for answering our questions. If you’ve any love for art deco, high fantasy or mobsters, you’d do well to check out Streets of New Capenna- it’s available now, along with 5 commander decks representing all the different families in the game.