Developed by Vile Monarch and Published by Ravenscourt comes the upcoming strategy city-builder game – Floodland, a game that takes place in a world where planet Earth has been destroyed by climate change and in our demo review of the game, here’s our thoughts on it.

In Floodland, with the shrinkage of land mass is at hand, along with society at the brink of collapsing, it is up to the players to lead their clan to explore, develop and rebuild society back to whole. I personally think that the way Floodland went with their overall art direction and aesthetic successfully captures the vibes of being in a desolate and deserted place mixed in with remnants of past man-made structures and nature, which fits in the post-disaster era.

Despite the game’s more sombre undertones of the aftermath of climate change caused by the ignorance of mankind, I can’t help but enjoy the art style of Floodland and how colourful and atmospheric the game is.

What caught my attention the most from Floodland is probably the 2D art-style that they went for, most notably with the character art and portraits in the game. They have a painting-esque style to them which shows off a handful mixture of colours that really brings out a certain unique charm which does appeal to me a lot. Although, the icons of the resources from the UI aren’t as memorable as the character portraits are, it still manages to carry over the necessary information of what each resources is, so that’s fine.

Going more into the UI, I think the main one isn’t as cluttered as other city builders which is great since it doesn’t overwhelm you with too much information on the screen. But one minor gripe that I have with it is that I personally wish that the “Technology Development” tab would be a little more neatly organised. The main Technology Development tab is nice and clean but once you go into one of the sub-tabs, I personally felt that they could’ve displayed the buildings in a more neat arrangement so that it can include all the buildings within one page. Because with the arrangements right now, I feel like there’s too much wasted space and that they can fit in more stuff without having the players scroll through the tab, but that’s just my own personal nitpick issue. As for the soundtrack of the game, it has an overall calming ambient music that is very mellow and relaxing which unfortunately doesn’t make it very memorable per se, but it does succeed in giving off a soothing vibe when listening, which I think fits in with the atmosphere that the game wants to present to the players.

At the start of the game, one thing that really struck out to me was being able to choose between 4 different clans where you can start off your playthrough with, each with their own “worldviews” and “clan traits”. A clan’s worldview is essentially what sort of values they prioritise when trying to rebuild society, while the clan trait is a permanent passive you can get from picking that clan. So for an example, for my playthrough I went with the Berkut-3 clan where their worldview is called “New World Autocracy” which means its a clan that values science and rational thinking, but also order and security, while their clan trait is “Explorers” which gives a passive 50% boost when it comes to clan search and collecting goods. Although, from the demo I didn’t quite get to see the clan’s worldview playing a part during the gameplay, but I’m assuming it will affect your clan’s overall satisfaction as a whole when you pick the right decisions that fit into their views. But having the ability to pick between different clans with their own distinction is really cool to have, and hopefully when the full game releases we get to see more of that gameplay feature.

The game also offers a customisable difficulty where you can temper with that let’s you choose how hard some of the features like resources or disease severity are, I just went with the default difficulty but I think it’s pretty cool that the game gives you the accessibility to change how challenging you want the game to be. Another neat feature for Floodland is that you’re able to task your workers to do an area search instead of individually clicking on the resource patch and select the “search” feature for each of the resources which can save you some time from micromanaging because you’re going to do a lot of that for the game, from assigning workers to specific buildings and balancing it out so that there’s no vacant spot on your important buildings. But you can assign your workers even when the game is paused, so there’s really no rush. I think they’ve integrated the tutorial into the story, so once you’ve collected the necessary food supply before setting up camp, the real fun begins. Your next assigned task would be to find the scouts in the nearby ruins and have them join your clan but you’ll need to have the required amount of food to be able to host them, you’re also given the choice to turn them down too if you don’t have enough food at the moment. Once that task is completed, you’re then opened up to the main meat of the gameplay of rebuilding society. The progression of the buildings that you get to unlock is tied to an important resource called “Research” points where you can get from completing tasks, there’s also a building which lets you produce these Research points in exchange for another resource but for now, this is the only way you’re getting these points.

Some buildings you can research right off the bat given if you have enough Research points but there are a lot of buildings that require you to invest those points into the what I call the “Resource wheel” where it’s a tier based format that you can only unlock the next resource after you have the prerequisite unlocked. Another thing that’s worth mentioning is that the buildings that help you with gathering resources, you’ll need to place them down next to those resource patches because each building has its own search range and can only gather resources within that area. So you’ll need to properly place down those buildings to maximise the amount you gather, you also can’t move your buildings once you’ve place them down, only destroying them. From my playthrough of Floodland demo, the gameplay especially in the early days felt really slow, and there’s a lot of downtime where you just have to wait for the necessary resources to progress through the game, pair that up with your workers only working through the day and resting at night, which can be a tad bit annoying at times where the only thing I can do is just to wait, but there are two different speed up options and I tend to rely on the fastest one when playing through the game, so the early days are still doable. At the same time you can say this does play more into the relaxing side of gameplay so if you’re into that, this game might be your cup of tea.

There’s also some point in the game where you get handed with a scenario where you have to pick between different option choices that might affect the overall satisfaction of your clan which does gives off an interesting gameplay narrative. 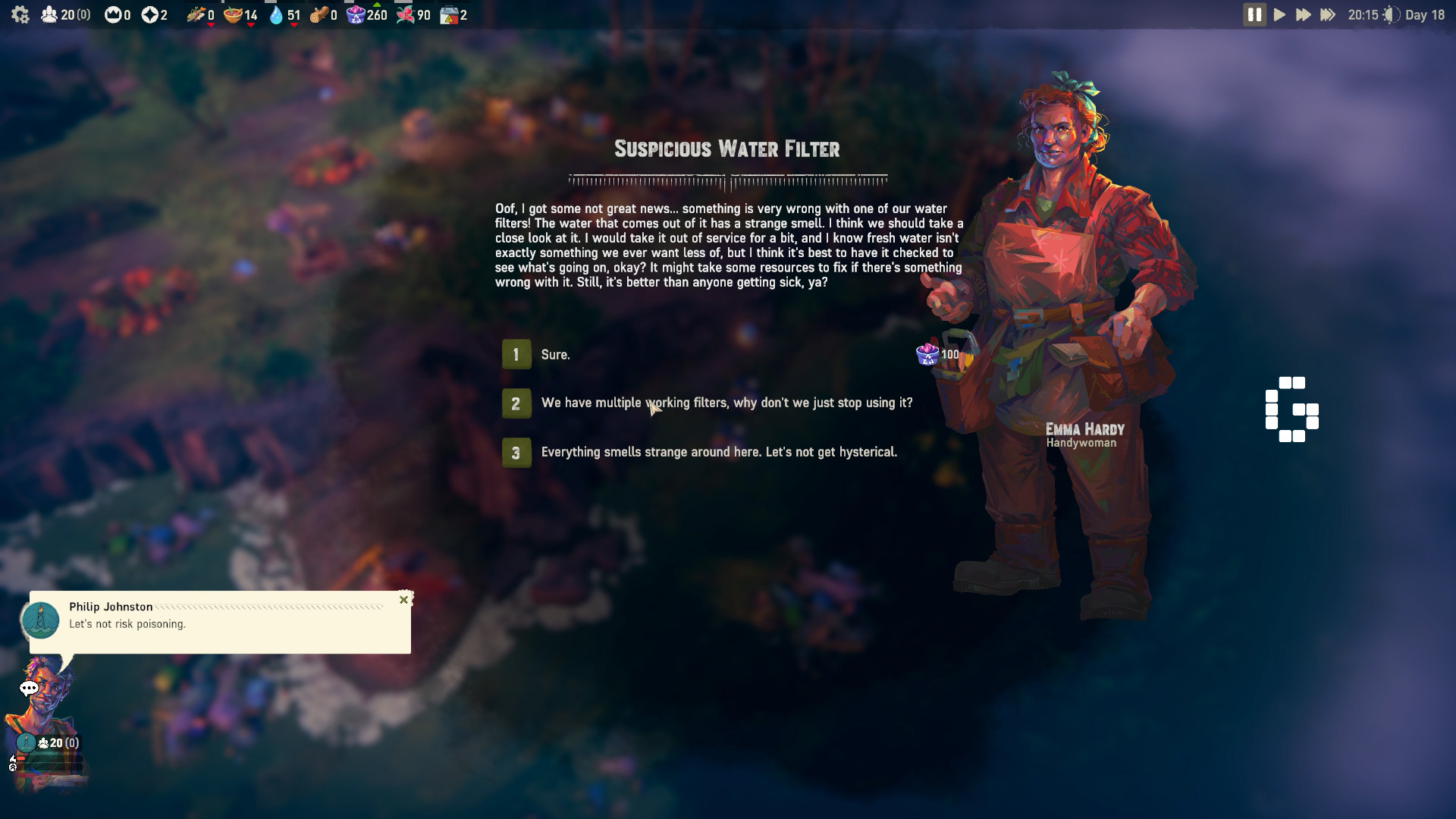 Overall, I had a pretty enjoyable time playing through the demo for Floodland, there’s a lot of cool concepts in terms of the game’s features but I didn’t get the chance to dive deep into those, like there’s this clan profile page where you can assign a specialised clan member’s skill where you can spend points to level up, like having your people be more efficient in resource gathering. The game felt very atmospheric and pretty, which builds up into a chill and relaxing gameplay experience overall. Though, my one gripe with the game is just that the early game felt very slow to go through but once you get access to more buildings to play with and open up the map a bit more, Floodland makes for a super interesting game.

Floodland is set to be released on 15th November 2022 for PC.

Fire Force: Ennbu No Shou Closed Beta Impressions – The Only Thing Being Set Alight is Your Wallet?