In celebration of FGO 5th Anniversary event, the mobile game Fate/Grand Order had revealed tons of update content as well as events during the “Chaldea 5th Anniversary Broadcast SP ~under the same sky~” special live stream that was held on the 10th August. In conjunction with the Retweet campaign held by the official FGO twitter account, the campaign had successfully reached the designated goal and all players are able to receive up to 90 Saint Quartz as the milestone reward. During the live stream, a special 5th Anniversary animation video that was made by A-1 Pictures had been revealed. The PV showcased several servants all in celebratory outfits to celebrate this special event.

The rewards will include:

Additionally, if players login 4 times during the campaign period can obtain the following rewards:

For a limited amount of time, AP consumption for all daily quests that appear in the Chaldea Gate for each day of the week will be halved! This campaign will be available from August 10 18:30 till August 17 12:59(JST).

The third campaign features Great and Super Success rates for Servant and CE enhancement will be increased by 5x their usual rate. The event will be up and available on 17 August 12:59 (JST).

Inventory spaces will be expanded as follows:

New Mana Prism missions will be available to replace the daily event quests. 30 Mana prism can be obtained in everyday missions starting from 11th August 00:00 (JST).

The maximum number of Friend slots have been increased by 5, regardless of Master Level! There will also be Limited-time missions being added:

#7 Items are no longer needed to separate Command Code

Command Code removers now no longer need to be used when transferring Command Codes. Instead, they can now be used to re-lock Command Cards, refunding the code unlocker used to unlock the card. This event will be available 10 August 18:30 (JST).

In addition to the previous Servants Strengthening quests, four new Servants have been added for this enhancing quest. These Servants include:

Proceeding through the story now gives a corresponding amount of Saint Quartz fragments! Clearing all the available Main Story quests gives a total of 1046 Quartz Fragments, or 149 Quartz! This event will be available on 10 August 18:30 (JST).

The 5th Anniversary Lucky Bag Servant summon is now available! Players can roll one time in one of five available banners for a guaranteed 5★ limited Servant! Do note that this is available using paid Quartz only and will cost 15 Quartz.

There are 5 available banners, featuring limited Servants based on year of release. The pool is as follows: New costumes have been added for the following Servants:

All are unlockable through limited-time quests, which also reward 1x Ticket each 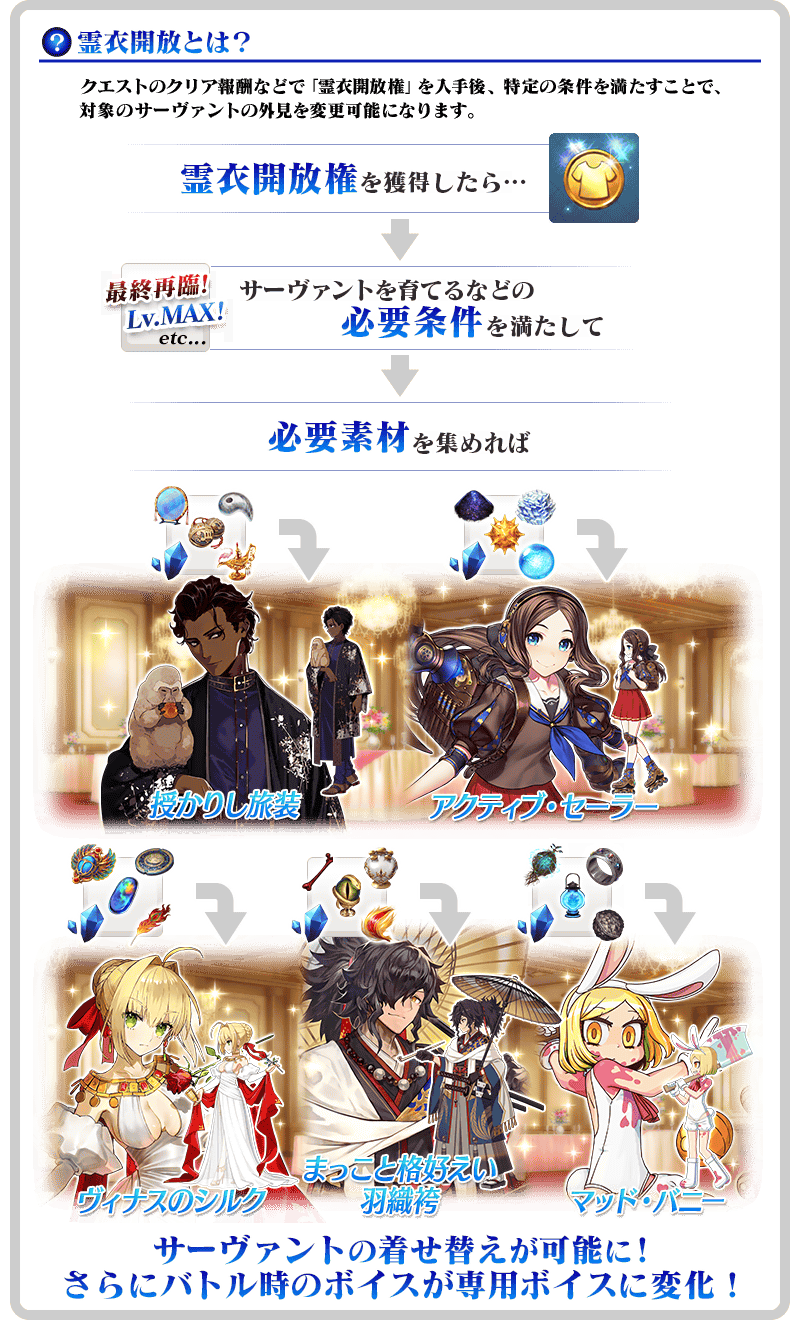 The All the Statesmen! Learning with Manga: The History of the American Frontier event will be rerun until 17 August 12:59 JST! The sixth and further copies of 1 Star Berserker Paul Bunyan will provide 50 Mana Prisms each. A new Altria servant had also been announced in the live stream event, this time in the form of the Caster class.

Here is Caster Altria with her new Noble Phantasm:

Fate/Grand Order The Movie Divine Realm of the Round Table: Camelot