Not content to simply continue Diablo 3, the upcoming Diablo IV is planning a bold rework of the game’s systems. In a Developer blog post, Blizzard outlined some of the ways they’re reworking the game. David Kim, the game’s Lead Systems Designer, helped explain the in and outs the team was working on.

The biggest change coming to Diablo IV would be its revamping of the game’s skill system. According to Kim, they want to create a system completely different to Diablo 3, and add more depth. They even conceptualized the new skill tree with an actual tree.

“We’ve been reading through a lot of the comments from the community and agree that the Talent system needs more depth. Similarly, Skill system progression felt too simple, which created issues where a player would have no meaningful reason to spend their skill points. With this valuable feedback in mind, we’ve have been iterating on a new Skill System”, he says.

The new skill tree would have upgrade nodes, which allow you to invest Skill Points. These will unlock new skills, as well as functionality for existing skills. However, along these node paths you’ll also find passive points. These will get you Passive Points, which you can use to upgrade your passive skills. These are more general upgrades for your character.

Diablo IV is also working to make your class a more meaningful choice. With the new installment, the team is adding unique mechanics for every class. Previously they discussed the Barbarian’s Arsenal system. This allowed them to switch weapons on the fly, and carry up to four of them at a time.

“The main goal for us here is to have very unique class-specific mechanics in Diablo IV. We have this goal because Diablo is the kind of game where many players try out different builds or classes, especially during seasonal play. We believe that unique class mechanics with very different strengths and playstyles compared to other classes will make exploring the different classes—and playing the game—much more fun” Kim says. 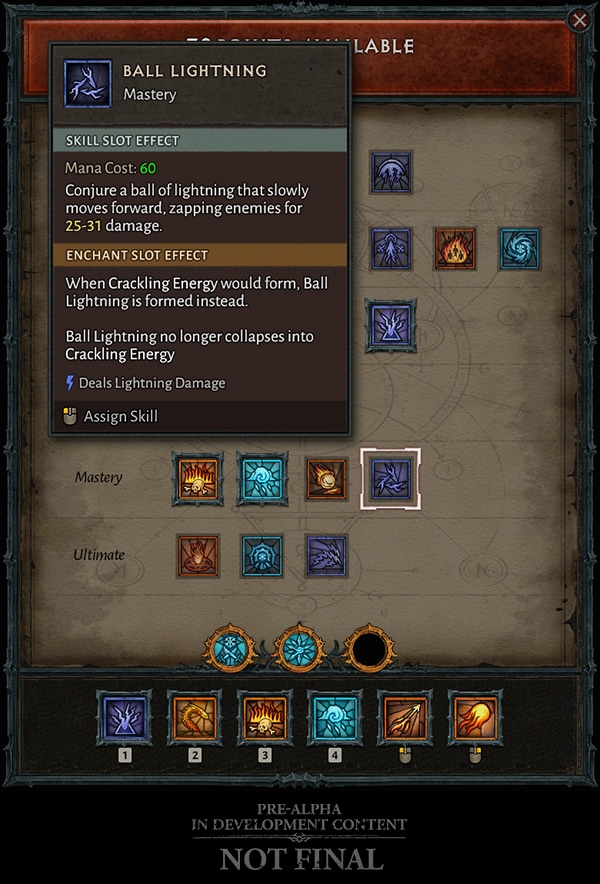 Here’s how it works: The Sorceress skills can have two possible effects. One effect applies if its equipped as an Active skill. Alternatively, the skills can be equipped as enchantments, where they provide secondary effects to your Active Skills.

One of the big changes coming to the game would be in the form of the Ancestral, Demonic and Angelic powers. Previous builds of the game would reward building your armor set around these scores. The reward was what Kim refers to as “minor stat bonuses”. However, according to Kim the result was a misbalanced ratio of effort to reward.

According to Kim, they’re not quite done with the core concept of the system. “One thing we really liked about the system was the gameplay of managing stats in meaningful ways to hit certain bonus thresholds that then make your items better suited for the playstyle you are going for. We need some more time for iteration/rework here and look forward to sharing more on itemization in our next quarterly blog”, he says. One of the most important parts of a loot-based game is its Legendary items. The value of a looter’s legendary items greatly affects its endgame, after all.

Kim says one of Diablo 3’s shortcomings was the game’s overdependence on Legendary items. Rather than have builds depend on your gear, Kim wants players to have more choice in their type of builds. “We plan to put more of the player’s power back into the character to make build choices more impactful, rather than have the majority of player power coming from the items they have equipped”, he says. “That said, it’s important that we strike the right balance so that itemization choices always feel meaningful”.

They’re also looking into how to address the differences between the game’s different tiers of rarity. They didn’t go into much detail here, but Kim says they’re responding to a lot of “mixed feedback” on how to handle it.

Speaking of endgame, Kim says there are some big ideas in the pipeline for the game’s own endgame system. Rather than simply use the Paragon Points from Diablo 3, he wants to work with something new, although details are scarce for now.