CRIMESIGHT is a mystery simulation game from Konami, an always-online title that pits you against other players in a clash of wits. It is currently exclusively available on PC via Steam, since its launch 14 April 2022.

London, 2075. This future era sees a 90% reduction in crime thanks to an advanced system known as Foresight AI. The developer of the system decides to take it further: to craft a powerful AI capable of solving the most heinous of crimes, appropriately named “Sherlock”. However, a rivalling AI known as “Moriarty” emerges, having similar capabilities, but one wishing to bring ruin to the world instead.

Rather than sniffing out the “sus”, the crime is merely a potential... for a time. Do you prevent it, or would you perform the crime instead? Casting doubt or identifying suspicious behaviour won’t be enough, as you will need to pull out all the stops whether it’s eliminating your target, or successfully preventing the incident from occurring to begin with. You’ll be randomly assigned one of three AI when you start a game:

Think of the manor as a “chessboard”, with the characters within being pawns you control. Sherlock will need to track down the potential victim and villain, Moriarty to help the villain commit the murder, and Irene to give Sherlock red herrings. Moves need to be done in 10 turns across time blocks, all the while with pawns potentially going hungry, injured, and the like. 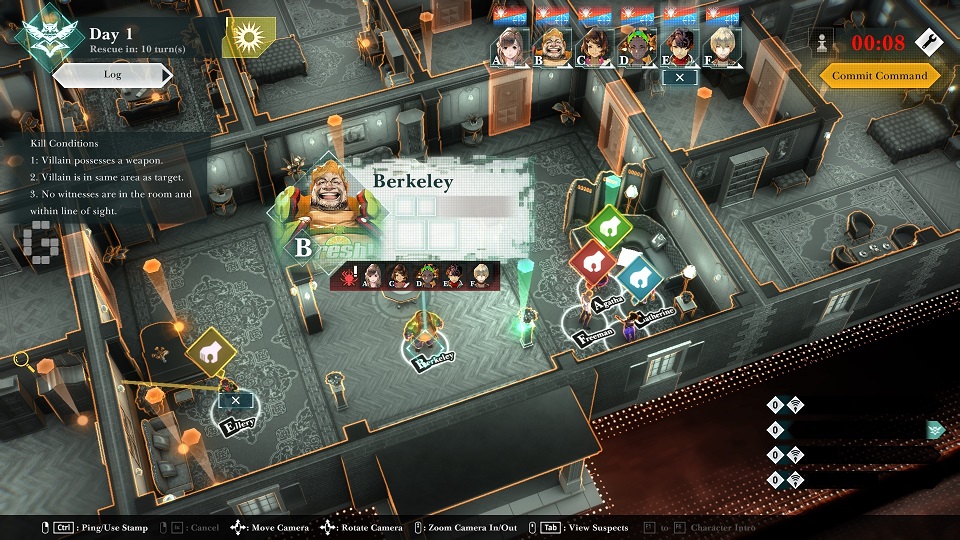 Exploration is key to acquire supplies, be it to keep your pawn healthy, or the murder weapon. Random events may occur in which environmental hazards can throw a literal spanner into the works, from wild dogs rushing in, gas leaks to blackouts. Environmental awareness, aside from the mind games, is incredibly important.

While you have your clear-cut hero / villain AI, it is entirely possible to collaborate with any of them, whether on purpose or not. Maybe you agree to have someone else control a pawn, but when you remember how Moriarty’s persuasion takes priority over Sherlock’s, that can result in some power plays. The game does have an option to cast a vote to determine the most suspicious player, which is more of a sign to watch out for them rather than an outright elimination. You won’t be throwing AI out of the airlock here. Moriarty is probably the most fun to play, as you really only have the one goal with the advantages to make it easier: get villain to victim to do the murder. You could get fooled by a Moriarty player as Sherlock, and Irene has no direct influence on the game, almost devastatingly over-reliant on a reasonably competent Moriarty. This isn’t forgetting the exploration aspect: as important as it is, the actual appearance rate of items is random, so your pawn could end up dying.

As it stands, the concept is fun. However, you basically get to see it all in just a few games, with currently only 4 gameplay modes in different formations, one variation of the manor map, three main AI and the same missing structure. The extensive tutorial is a must to learn the game and even so, the learning curve gets steep with the various moving parts to juggle. You can see how well you’re doing through the statistics, and for the especially confident / competent, compete on the weekly leaderboards. 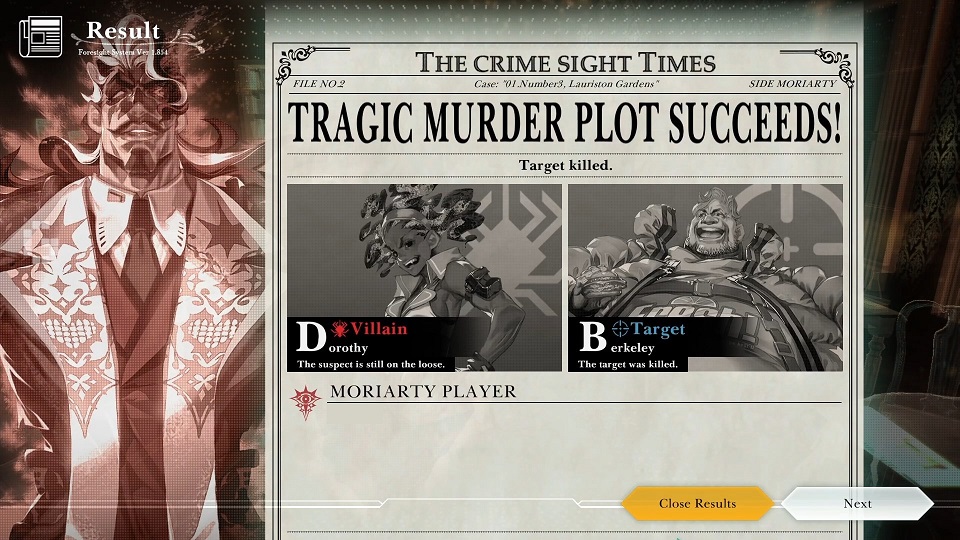 The experience can only improve if / when they eventually add more AI, random events, pawns or even just methods of assailing the victim, with only the one cutscene you’ll be seeing over and over. The asking price is already pretty decent for what it currently offers as you either get closer to the truth, or fail to prevent the crime, with all the factors you need to consider.

It does feel a little unfair considering Sherlock doesn’t have Watson to counter an Irene. Luck plays a factor with the random item spawns, so you could be accidentally helping Moriarty instead. Balance changes might be required to ensure a game doesn’t get too one-sided too quickly.

CRIMESIGHT is a novel take on its genre of whodunnit social deduction which can benefit from some more polish and added content. CRIMESIGHT
Developer: Konami
Release Date: 2022-04-14
Microsoft Windows, Steam
Whodunnit... or who will do it?! A new mystery simulation game with player-vs.-player action arrives on the crime scene! In CRIMESIGHT, players will face off against each other in a battle of wits. In this clash of good and evil, who can outsmart their opponent and come up on top?!
Tags: CRIMESIGHTKonamiKonami Digital Entertainment
ShareTweetShareSend
Previous Post