As the Revue Starlight movie finally releases on Blu-Ray this week, it’s the perfect time to take a look back at Bushiroad’s bizarre anime- which in itself spawned its own mobile game.

On the surface, Revue Starlight isn’t far off from your standard shonen anime. Aijo Karen is a slacker in the prestigious Seisho Music Academy- a hyper competitive girl’s school for the performing arts. Motivated by her desire to star in a production of Starlight alongside her childhood friend Kagura Hikari, she’s somehow the least competitive girl in her class and relegated to practically a mascot due to her clumsy and laid-back demeanor.

One day though, everything changes. Hikari, who had previously been studying overseas, mysteriously comes to Seisho as the new transfer student. On top of that, she discovers the mysterious Revues- auditions held under the school every night as all her classmates duel each other to a soundtrack that shouldn’t go as hard as it does.

The auditions aren’t for just any role however- they’re competing for a tiara which grants the stage girl any stage they want- something you learn later on really means anything. These duels are, thankfully, not to the death, and instead a battle to knock the cape off your fellow stage girl, all while singing and dancing.

And that’s the first point about just why Revue Starlight is so good- these Revues are all incredibly well-produced, having elaborate choreography, amazing music and being a great source of narrative tension. Each episode’s Revue follows a theme: Revue of Jealousy, Revue of Sorrow, etc. And each character paired up for said Revue has their reasons for being pit against each other. 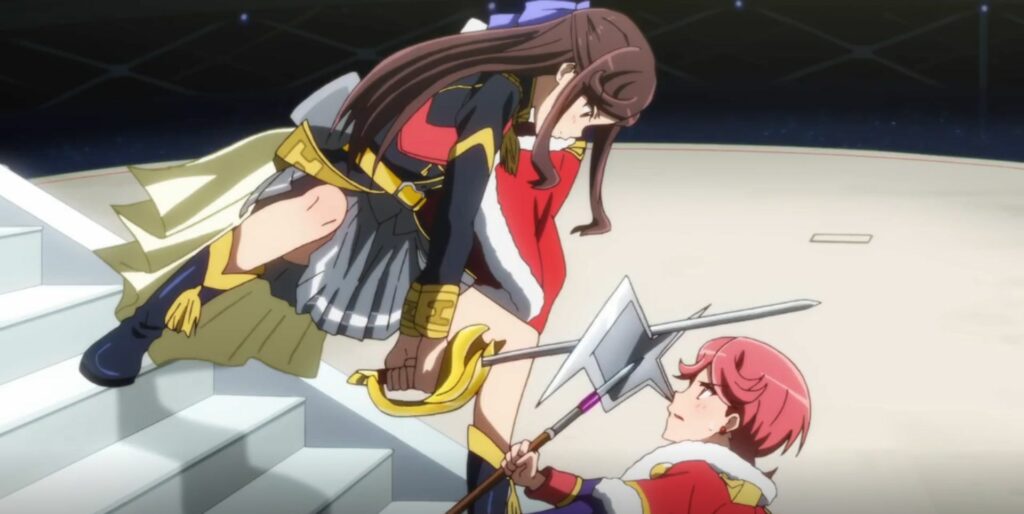 It’s a great tool for characterization too- a recurring shot in the anime is that while the episode focuses on one specific revue, other characters are engaged in their own revues at the same time. Something as simple as a quick shot showing that side characters are engaged in their own Revues is a great way of showing their connection without going into a 10-minute tragic flashback. “Junna and Kaoruko are paired in the Revue of Jealousy, clearly this means…” is a great way to encourage fans to come up with their own theories about each of the girls emotional bonds with each other.

Outside of the Revues, there’s a lot of great slice-of-life moments as well. While the girls are absolutely vicious on stage against each other, their day-to-day lives are laughably mundane.

When Daiba Nana is in charge of casting their next production, every member of the class starts bribing her with sweets to get the leading roll. When Kaoruko and Futaba, two childhood friends, have a falling out, Kaoruko’s shown struggling with having to eat her vegetables since Futaba isn’t around to eat them for her. Underneath the dramatic fights, there’s a lot of just fun quirks for each character that helps them feel a little more fleshed out.

That’s not to say each episode’s main revue is anything to scoff at- like I said the fights in each episode are incredibly choreographed setpieces, quite literally: each girl has a trait called Brilliance, and the more they shine on the stage the more they can do. The first episode features Hoshimi Junna being able to move props on the stage as she tries to shoot Hikari’s cape off with her bow.

It gets even wilder when you reach episode 3- the Revue of Arrogance against Tendo Maya, the class’s reigning starlet. as the “Top Star”, she straight up controls the actual stage, creating staircases out of nothing as protagonist Karen literally fails to stand on the same level as her. There’s a lot of brain food in the design choices made in Revue Starlight- there’s always a detail for you to think about the symbolic value of.

On top of that there’s also the music- Revue Starlight’s music is amazing, with each Revue having its own insert song as characters sing out their motivations, doubts and backstories. I’m especially fond of Love’s Wicked Pitch- a jazzy song about the shy and insecure Mahiru as she struggles with her feelings about Karen, until she finally learns to value herself for who she is, rather than her feelings for her roommate.

The whole revue is a directorial masterpiece- as Mahiru slowly comes to terms that she has to stand up for herself, everything from her camera to her movements get more elaborate, culminating in one of the most gorgeously animated twirls as she finally decides to fight Karen as an equal. Combined with the duet nature of the insert song, the whole sequence is a great celebration of the two characters.

On the surface, Revue Starlight is very much your standard shonen esque story about Karen Aijo overcoming her own flaws to become the number one Stage Girl. That being said, at exactly halfway through the anime you’re treated to one of the most intriguing twists I’ve seen in your typical “power of frienship” battle anime

It’s not edgy for the sake of edgy, but it certainly takes some twists you weren’t expecting. One thing I really appreciate about the twist is that at best, it’s a B-plot for the Karen-Aijo-Grows-Up main plot. There’s a lot of questions raised about the nature of the Revues and the Giraffe who oversees them, but only the thick-skulled Karen doesn’t bother to ask them, so it’s treated as something that only two characters in the anime are aware of at best.

Better yet, this only gets further enhanced via the anime’s compilation movie, Rondo Rondo Rondo, which doubles down on the darker side of the Revues, leading straight up into the newly released Revue Starlight: The Movie.

One Of My Favorite Anime It’s hard to not love this anime. Lots of gacha games have anime, but Revue Starlight feels like one of those that actually stands pretty well on its own two feet. It would have been really easy to just make an anime, bait a little yuri in it and call it a day, but the fact that Revue Starlight actually bothers to put effort into the spectacle of it all really fits its theatrical themes.

That’s not to say it doesn’t have its flaws. For one, I think the dynamic of Karen and Hikari, the leading pair, have all the chemistry of a car accident. While the shot compositions are amazing, there’s a lot of moments where the animation can feel stilted. There’s also the weird dichotomy of the anime’s messaging- at times it *really* seems like the anime has something to say about showbusiness and the toxic nature of chasing perfection, but it almost always conveniently cuts away to just gals being pals, too.

But all in all, it’s worth a great watch. Now to wish that some service like Netflix or Muse Asia would get the rights to stream the movies outside of Japan, or something.

Noah’s Heart Closed Beta Impressions: There Is So Much