by W. Amirul Adlan
in All, Nintendo Switch (Platform), Opinion
0

Unlike Pokemon, Monster Hunter fans live with the truth that not every monster gets to be in every game. In the months leading up to a new title, fans are most vocal about which creatures they most want to kill and turn into hats.

We polled members of Monster Hunter Malaysia Gathering group on Facebook on their own monsters they’d like to see return for the upcoming Monster Hunter Rise which comes out this March. It’s no surprise that many of the top results were also absent from Monster Hunter World, with fans feeling like the new platform means its time to rotate in some monsters that had been missing from the limelight.

Gore Magala – If Tokyo Ghoul’s Unravel Was A Dragon Arguably one of the coolest Elder Dragons to grace a game’s box, Gore Magala has a presence that just sticks with you. Though the creatures of Monster Hunter are treated as a part of nature and thus not inherently good or evil, there’s no arguing that Gore Magala clearly has an evil presence about it, with its wings that look like a cape dragging along behind it as it moves.

It’s also got a weaponized sense of style, turning the skies gray when it enreages, unfurling its glowy purple horns in a fight that screams “JRPG final boss”. Aesthetically its easily one of the top designs in the Monster Hunter series, though its integration with Monster Hunter 4 Ultimate’s mechanics did cause it some trouble

The dragon is tied to 4’s frenzy mechanic, whereby players would have to be aggressive to overcome a frenzy virus originating from the dragon, in return for a big attack boost. Its presence caused other monsters to have frenzy variants in the game, though this was dropped in Monster Hunter Generations when the frenzy mechanic simply became a status effect exclusive to Gore Magala.

While the monster was absent from World, it does appear in the upcoming Monster Hunter movie, so it’s understandable that fans would want another shot at this gothic beast.

Even though these are two separate monsters with their own separate fights, it’d be remiss to separate them. Existing in total contrast to each other, Akantor and Ukanlos are a pair of powerful monsters that show not every threat has to be an Elder Dragon. Akantor in particular is cool because historically, its armor set has always given the bludgeoner skill, which rewards players for using low-sharpness weapons by giving them an attack boost. While its actual practicality will be debated by players much better than me, Monster Hunter is at its most fun when it has skills that force you to look at items a different way. 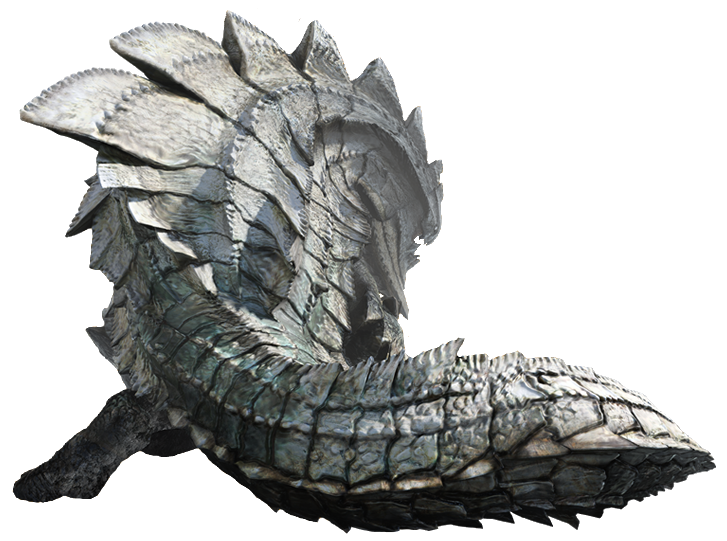 Meanwhile, Ukanlos is a giant snowplough, with a shovel-like beard and a design based off of a sailboat. It’s got big moves, swims through the ground and is so huge it takes a while to run up to its face should you happen to down it. Its armor set is also the opposite of Akantor’s, historically being better for keeping your weapon sharpness up.

Personally, I like them for just how unimportant they are. Monster Hunter can tend to fall into a bit of a feature creep problem, where many endgame enemies are portrayed as cataclysmic world-level threats. In this case, they’re literally just two big Wyverns hanging out in their themed areas, up until you decide you need a hat and so invade their homes. Saving the world’s exhausting, sometimes you just wanna brutalize animals. Similar to Gore Magala, Lagiacrus is a victim of being used to show off its game’s mechanics. In Monster Hunter 3U, the Leviathan was used to push the game’s swimming mechanics- mechanics which haven’t returned at all since.

Thankfully, Lagiacrus was slightly reworked for its appearance in Generations, whereby the beast was now a 100% terrestrial fight. World’s big open maps made Lagiacrus’ absence really obvious, since many fans were clamoring for a chance to fight it with World’s higher-res graphics.

There’s been rumors that the problem was to do with Lagiacrus’ Leviathan skeleton though, as monsters that shared the skeleton such as Chameleos and Mizutsune had also been absent since Generations. With Mizutsune in Monster Hunter Rise though, many fans believe this to be a sign their favorite aquatic monster would be returning.

With two months left until Monster Hunter Rise’s release, there’s still plenty to be announced regarding the game’s returning roster of huntable monsters. For one, there’s been no word on the returning Elder Dragons, who make up a good chunk of every Monster Hunter title’s endgame.

That being said, fans could also do well to realize there’s a lot to love with Rise’s large roster of original monsters, all based off of Oni from Japanese folklore. We’ve gotten at least one new monster in each of the trailers so far, hopefully meaning there’s going to be a lot of monsters specifically designed for Rise’s bold iterations on the game’s combat systems.

We’ll have to see for ourselves if any of these three make it into the game when Monster Hunter Rise drops March 26th, 2021.

Give us some support by subscribing to our Youtube Channel !
Tags: CapcomFeatureMonster HunterMonster Hunter Rise
Previous Post