The game uses this cute chibi style that’s often pretty colourful. It’s funny to me simply because looking up a novel cover draws a stark contrast with what you see in game. Here: 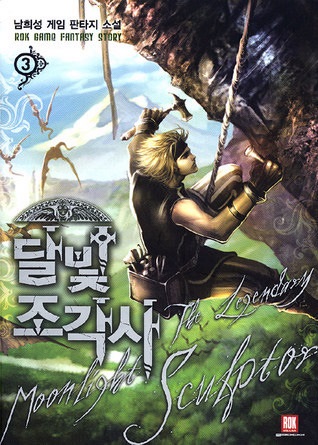 I don’t think it’s “bad” that they opted for this cute style. Heck, it might actually make it stand out a little more from other mobile MMORPGs out there, which depends on how many others you’ve played. You can customize your own character before you jump into the game by mixing and matching a bunch of presets, some of which have more colour options than others. There are five classes you can choose from the start, while you can also select the option to decide later on.

To me, the UI gets a mite crowded, and I’m not sure if the occasional unresponsive controls is because of my screen, or the game. You have your typical virtual joystick on the left, and skill hotbars at the bottom right, of which you have two tabs.

In the game proper, story beats occur in letterboxed cutscenes, or with overworld dialogue. For fans of the source material, you’ll be able to recognize the references, like how Weed’s been swinging his training sword for four weeks. Otherwise, if you’re like me who hadn’t looked it up prior to this, your first reaction is probably going to be “haha blaze it” and completely miss it. This is supposed to be your story anyway, with familiar faces hanging around as you progress through the main quests.

There are destructible objects in the game, but a loading screen tip says destroying too many would attract attention. I guess that’s bad? I can’t say I know how to tell apart the background items to breakable stuff, so eh. You can scrounge for materials to do stuff like cooking (food provides stats), craft, and the like. It’s got a little life sim going in, where you can fish among other things. There’s no fishing mini-game though; just hook on that bait, toss your line into water, wait, and voila. You can get a buddy to help out some with your adventure, giving some minor boosts to EXP gain, for example. Feeding them lets them do more stuff. You’ll get access to a house later you can decorate too. Watch out for that weight limit.

If you close the game for a time, you’ll come back to a Rest Bonus, giving you a boost for that amount of time you had the game closed. You’re gonna want to take advantage of that boost, as there is a lot locked behind your character levels. PVP, for instance, requires at least lv. 20+, while raising affinity with NPCs requires lv. 40+. Learning skills also gets locked behind story steps, so running off to do just side quests won’t do. This railroading is eased some with the fact you can meddle with auto-combat settings and auto navigation is available.

By the way, if you missed on how to do so, you hold and swipe up on things in your hot bar for auto-use.

You can find equipment in the overworld as drops, or buying them from shops. The equipment you don’t use can be shoved into “specializing”, giving incremental stats in the relevant equipment slot. You can opt to just dismantle them too, for materials.

As is typical, you have your achievement systems, and collect-a-thons to complete for a bunch of other rewards, alongside equippable titles that can give some stat boosts. The cash shop in this game doesn’t particularly involve gacha – unless you’re looking for specific buddies – with a lot of convenience items that some may argue would lean towards pay-to-win. I don’t believe it’s too egregious, though I will defer to more mobile MMORPG veterans to decide on that.

If you were expecting something quick to spend some time with friends raiding and stuff, Moonlight Sculptor isn’t really that. Granted I did make some detours here and there, but you’re not gonna get to speedrun this and have the world immediately open up to you in the course of an hour. It is an MMORPG after all, these kinds of games require a level of time investment.

It sure does start out slow, shuttling you from fetch quests to kill x amount of monsters and back again, with meeting NPCs in between. I would say it’s not for me, but if you like mobile MMORPGs, give it a fair chance and see if the gameplay loop can keep you in.