Is a Pokemon survival horror movie on the way?

You can watch the video below:

⚠️ Calling all Trainers! ⚠️ A researcher has made a rare discovery in the Canalave Library: some mysterious footage that appears to document the landscape of the Hisui region… Please examine this footage and report back with your findings—they may prove useful during your adventures in Pokémon Legends: Arceus.

The video depicts an explorer searching for Pokemon, he comes across some Snowrunt before seemingly finding a more elusive pokemon. We don’t know what he found but it was “adorable” and had “white fur around its neck” before seemingly being attacked and the footage cutting off.

It is currently unknown what this pokemon is. The cameraman first thinks it might be a Growlithe or Vulpix meaning that it is likely a quadrupedal canine-like pokemon. Consider the new Hisuin form pokemon that Pokemon Legends is introducing, it could be a new regional variant or a new pokemon in general. The current theory among fans is that it may be a Hisuin Zoroa, a pokemon known for shapeshifting and is based on Japanese Kitsune, fox spirits that also serve as an inspiration for Vulpix and Ninetails, hence the comparison in the video.

There is also the question of how this guy has a video camera when Pokemon Legends is set in the past. Could time travel be involved in the game?

The shaky cam, low-quality video of the Pokemon Hisui found footage is obviously reminiscent of found footage horror movies like ‘The Blair Witch Project’ or ‘Cloverfield’. It is certainly an interesting direction for Pokemon to take but considering their ventures into TikTok and ASMR, it’s cool to see them branch out more with what can be done with the Pocket Monsters. 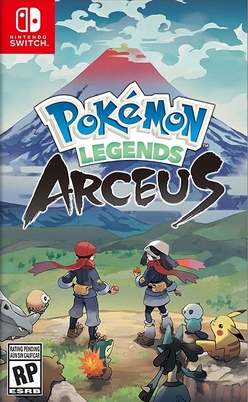 Pokemon Legends: Arceus
Publisher: Nintendo
Developer: Gamefreak
Release Date TBC
Nintendo Switch
Featured in the Sinnoh region, Pokemon Legends: Arceus is a new approach to the Pokémon video game series, promised to break new ground for the Pokémon series! This open-world RPG is coming to Nintendo Switch in early 2022. Showcased in the teaser, there will be a number of iconic monsters including Piplup. There will be a choice of starters including Rowlet, Oshawott, and Cyndaquil.
Tags: NintendoPokemonPokemon Legends ArceusThe Pokemon Company
ShareTweetShareSend
Previous Post