Overlord: MASS FOR THE DEAD is rerunning its Re:Zero collab over on its Japanese server in celebration of its second anniversary. The Overlord and Re:Zero cast will be meeting each other once again on 4 March, 15:00 JST till 18 March, 14:59 JST. The relevant “Battle Zone” event will be going live on 6 March, 15:00 JST to 14 March, 14:59 JST, where you can battle the Re:Zero cast in difficult battles. There will be, of course, an accompanying limited gacha with 5-star characters Emilia, Ram and Rem which will run the duration of the collab. Aura and Mare are both also available to obtain as 5-star characters through paid gacha, cosplaying as the maid twins themselves. 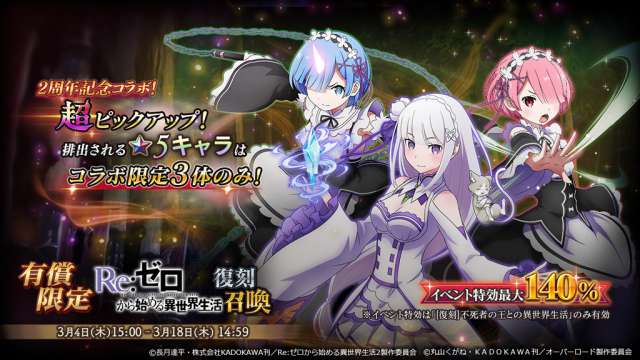 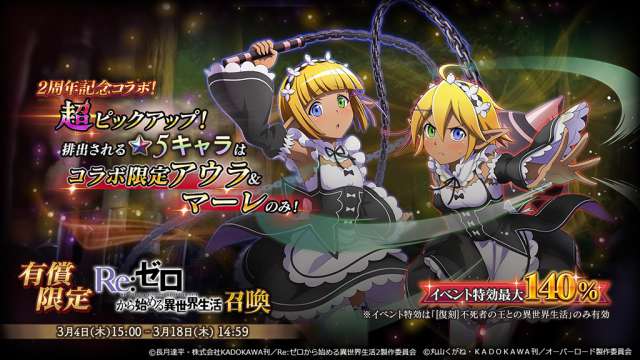 As mentioned, the collab is being rerun in celebration of the game’s second anniversary, with campaigns going on throughout the same duration. A log in bonus to obtain up to 2000 premium currency will be available, as well as free 10-pull gacha. The free gacha campaign will run until 31 March, 14:59 JST. There’ll be gifts given out besides increased rewards from quests. For those willing to pay, there are more premium item sets you can get as well.

It’s a shame the global version won’t be seeing any further events, as it will be shutting down on 31 March. You can always keep up with the Japanese release through the official Twitter.

Give us some support by subscribing to our Youtube Channel !
Tags: Kadokawa GamesMASS FOR THE DEADOverlordOverlord: Mass for the Dead
ShareTweetShareSend
Previous Post

Crash Bandicoot: On the Run! gets official release date in new trailer