We’re at that time of year where it’s a perfectly reasonable time to start thinking about getting a new phone. With phones only getting more specialized, it’s especially hard to pick if you like both gaming and photography. But what if there was a phone that did both? For your consideration, the Vivo V20 and V20 Pro.

Both of these phones use Vivo’s incredible camera and photography technology to make sure you’re taking the best photos you can even at night. Under the hood however, they’re two totally different beasts. A special thanks to Vivo Malaysia for letting us check out these phones.

If you want to get these phones, don’t forget to check out the following pre-order promotions: 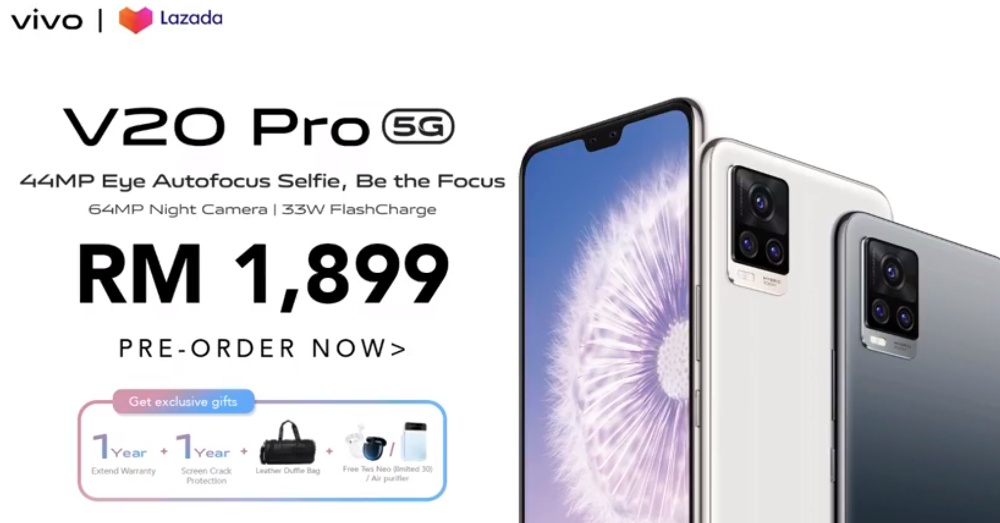 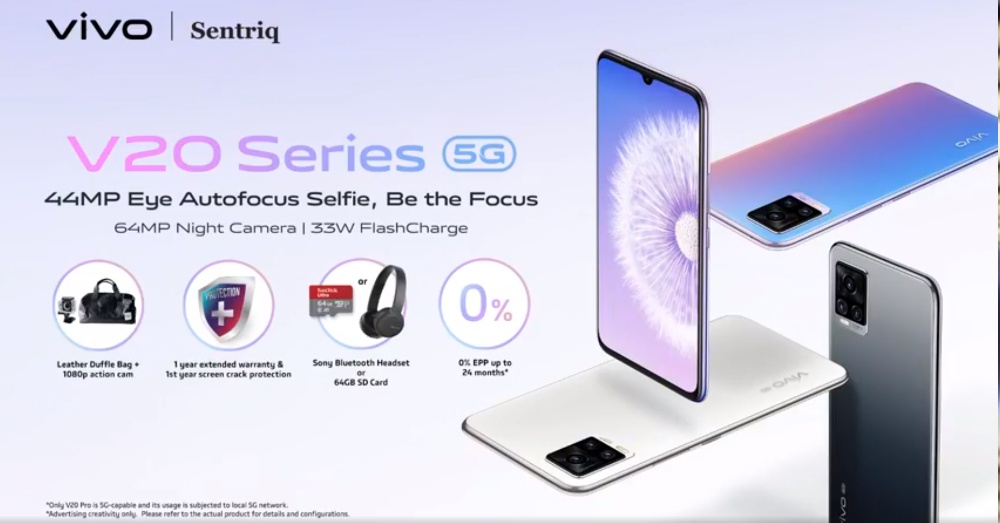 Here’s all you need to know about them:

Both phones are incredibly stylish, with that sleek rectangular shape, free of any visual clutter. They’re both also pretty thin, at about 7.4mm in thickness. It’s great for slipping into your pocket, though it does tend to feel a little light in your hands as a result. Some of us more anxious consumers might need to get a case, just to give it a little more weight. Here’s the problem with getting a case though: the colors on these phones are almost too lovely to cover up.

The V20 we were given came in a color called “Sunset Anthem”. It’s a really cool color that changes depending on the angle, giving the phone a very surreal feel. The different colors go from blue to purple to a hint of orange, so this is definitely a great color to get if you’re easily amused an just like admiring it from all the different angles. 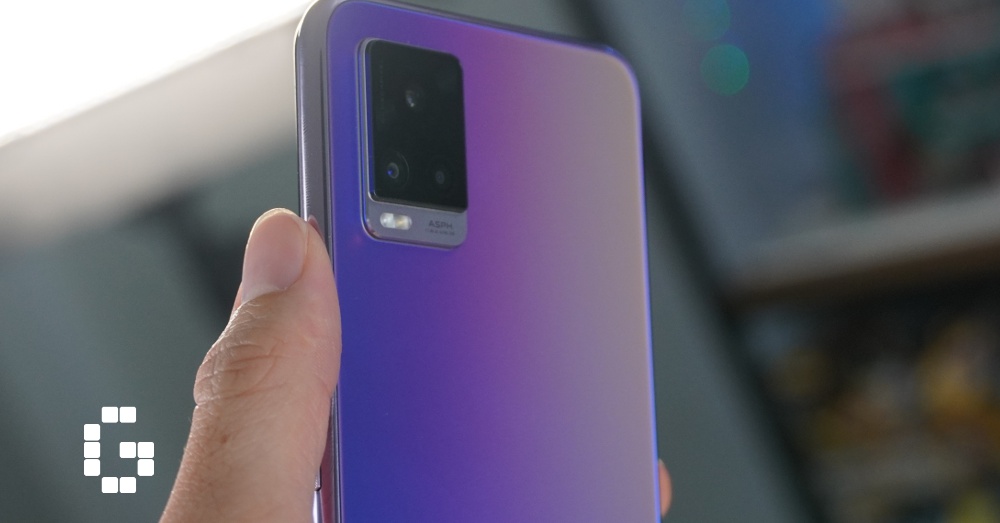 Meanwhile, the V20 Pro we looked at comes in an off-white called Moonlight Sonata. This color doesn’t have any cool visual gimmicks to it, it just looks classy. That being said, it doesn’t give me the same anxiety that white phone cases do, since it should be a lot easier to maintain than white plastic. Both phones come in either color, along with a third Midnight Jazz. So you won’t have to worry about preferring the specs of one phone but wanting the cooler color options of the other.

It should be noted, however, that the Vivo V20 Pro does not come with a 3.5mm Headphone jack. This means you’re going to need some Bluetooth solutions should you decide to want headphones with this device. The Vivo V20 and V20 Pro break all the stereotypes of weak front-facing cameras. With the V20, users get access to a 44MP camera, capable of shooting video in 4K at up to 30fps. It’s especially great for vlogging, since you’ll get a really clear picture with the front camera while still being able to see the screen.

On top of that, the Vivo V20’s front camera comes with face detection technology, to always keep your face in focus. The technology is pretty reliable for every day use, so you’ll never have to worry about your video blurring you out at random. 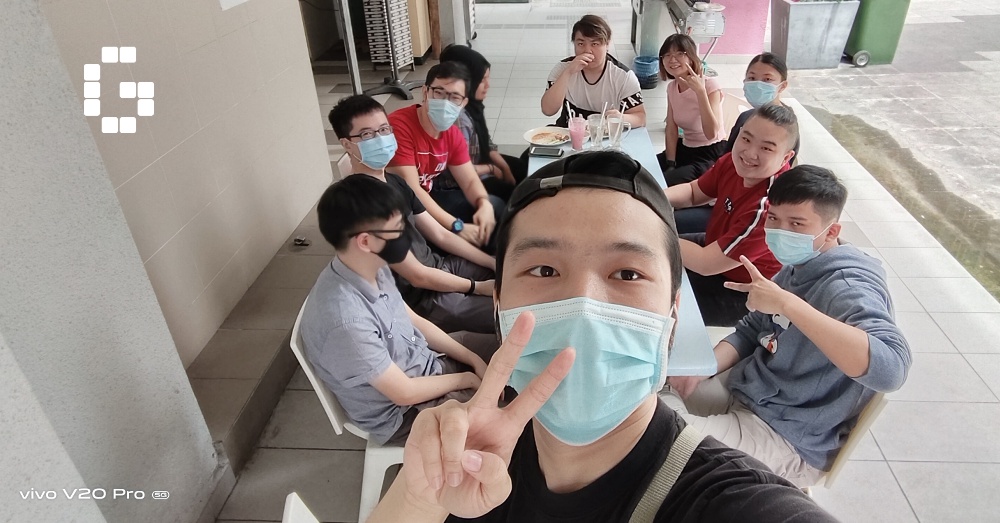 Not wanting to be outdone, the V20 Pro has one more trick on its front-facing camera. The phone has a second lens for the camera, allowing you to switch between a powerful 44MP lens, as well as an 8MP ultra-wide-angle lens for those big group selfies.

Similarly, it’s pretty impressive on the back end. The back camera comes equipped with three different lenses, to cover a wide variety of situations.

These are a 64MP main camera, 8MP Multi-scene lens as well as a 2MP black-and-white lens. Even every on-the-go photographer’s worst fear, night shooting, is no match for the Vivo V20 and its high tech algorithms. The phone has a multi-exposure overlay algorithm, to help your night shots look perfect. 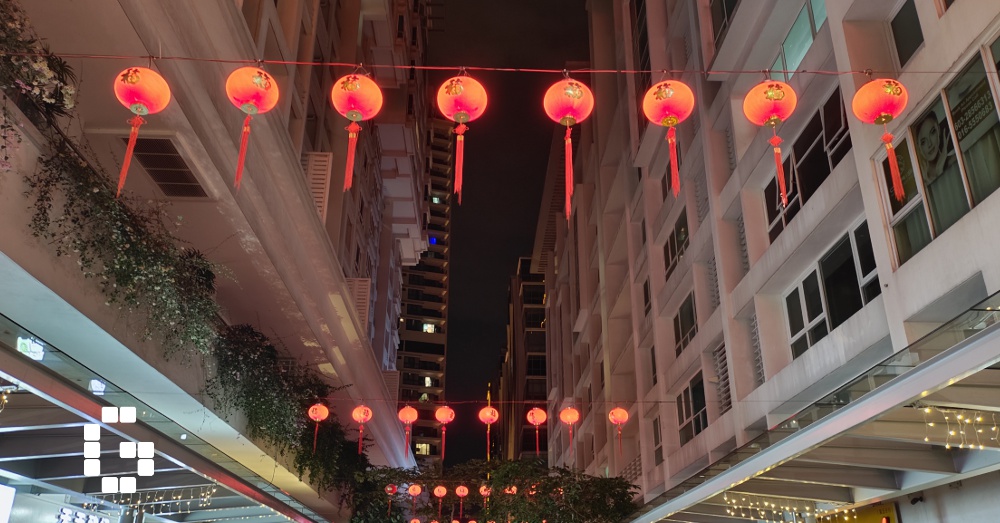 These pictures look great in motion, too. With the V20 you’re going to be recording videos at 4K in 60FPS, which is perfect for all sorts of high-energy recording. Personally, this means a lot of great pet recordings, since even the clumsiest cat is going to be recorded crisply with this tech.

Of course, it also comes with a Dual Shooting mode, whereby you can use both cameras simultaneously. This is especially great for aspiring vloggers, as you can capture big moments as well as your reactions on the go. The Vivo V20 and V20 Pro come with a 6.44-inch AMOLED screen, complete with fingerprint ID support. Additionally they also support face unlocking, so you won’t have to worry about unlocking your phone if you’re on the go.

This screen boasts high contrast and saturation colors, so you’ll be able to view all sorts of content on it without worrying about being bottlenecked by the screen’s display. It also boasts darker shadows than non-AMOLED screens, so expect plenty of good-looking wallpaper options for the phones.

The phones also use AG Matte Glass on its back, creating a look that’s both elegant to look at as well as pleasant to touch. It’s also smudge proof, so you won’t have to worry about getting fingerprints on the back of the phone. The V20 uses a Snapdragon 720G Processor, which is a decent mid-range chip. Thanks to its onboard AI, the phone is pretty decent at running videos without running too hot or taking a toll on your battery.

It also comes with 8GB ram and 128GB storage space, which means plenty of room for your photos and videos.

From a gaming perspective it’s a perfectly serviceable phone, though thanks to its mid-range chip isn’t really sitting on the cutting edge of gaming. The 720G processor is more suited to watching videos than graphically intensive gaming.

The phone barely runs Genshin Impact, one of the most physically demanding games on the market right now. Trying to play it on high graphics settings will cause the phone to heat up, as well as the game itself to freeze. Even on lower settings, the phone struggles to get past the 15fps mark with it.

It’s not too great at running League Of Legends: Wild Rift, either. Ultimately the controls tend to feel unresponsive, and the framerate tends to be inconsistent. That being said, it does actually run. Considering Wild Rift is much more targeted at a wide audience, its a good indication that the V20 is a perfectly serviceable gaming phone.

What this means is that while the phone certainly won’t handle anything too demanding, it should be able to run most normal games just fine. Unlike the V20, the Pro’s chip has explicit manufacturer comments about its ability to game. There’s a much larger reputation to live up to when it comes to the 765G Snapdragon.

With that being said, the phone is certainly able to back up its pro-gaming talk. Unlike the V20, the V20 Pro has no issues running Genshin Impact at 60fps. On top of that, the phone’s on-board AI and D5 Vapor Chamber Liquid Cooling help regulate its thermals, making sure those fire effects don’t actually burn your fingers.

Similarly, the phone runs Call of Duty Mobile effortlessly as well. While it never breaks 60fps, it provides a smooth gaming experience for users. The screen also feels extra responsive, making for a much more enjoyable time.

The two phones share similar specs when it comes to batteries, with both running a 4000mAH unit. These batteries can be charged relatively quickly, getting to a respectable 65% in half an hour.

Additionally, the two phones also come with an “Ultra game mode”, which can be used to control things like heat output and even notifications while you game. It’s a great feature, especially for those of us who hate being bombarded in texts while we’re grinding for loot.

While the V20 is definitely more of an all-rounder phone, the V20 Pro certainly gives a more power-focused push with its 5G enabled processor and more efficient cooling. 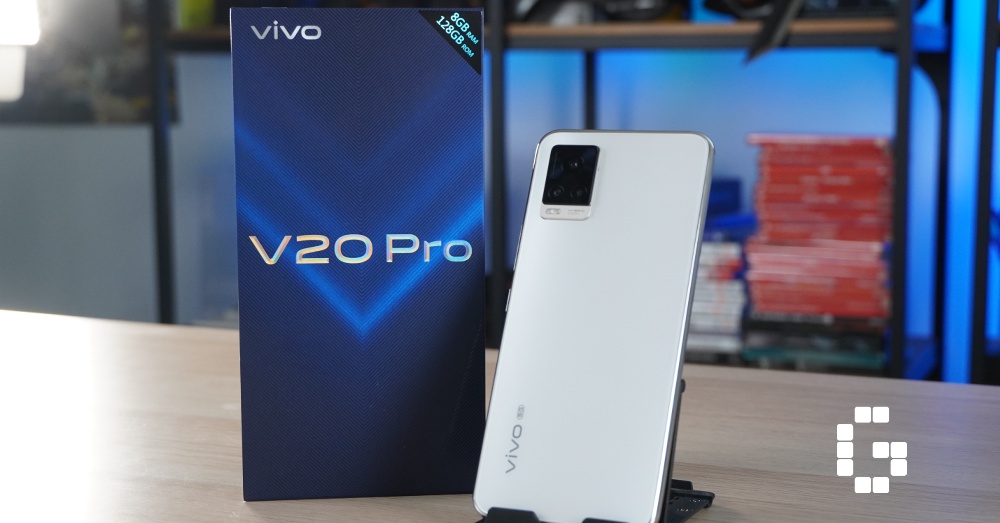 Despite the similar names, the Vivo V20 and Vivo V20 Pro are phones targeted at very specific types of users.

The V20, for one, is an excellent phone for the every man. It has plenty of features that would be considered a luxury on other phones, such as its face-focused technology.

Meanwhile, the V20 Pro seems to have an “everything, but more,” approach to the V20. From its additional front-facing camera options to its markedly superior chip, the V20 Pro definitely brings top-of-the-line performance for its asking price.

Don’t forget you can pick these phones up with a special promotion via your local telcos, starting from 22nd October for Digi, 24th for Celcom and an as-of-yet unannounced date for Maxis.

Alternatively, you can also pick these up via the official Vivo Malaysia Lazada and Shopee pages.

Give us some support by subscribing to our Youtube Channel !
Tags: Vivovivo V20Vivo V20 Pro
ShareTweetShareSend
Previous Post