Two new cookies are coming to Cookie Run Kingdom, Eclair Cookie and Tea Knight Cookie, alongside new events and modes to keep you running. The new update will launch on the 19th of January. 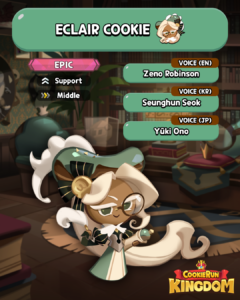 Eclair Cookie is an epic tier support Cookie who fights in the middle row, a rather different position from most supports who tend to stay in the back.

Check out our character guide on Eclair Cookie for using him in the game.

He is voiced by Seunghun Seok in Korean, Zeno Robinson (Hawks in MHA and Onyankopon in AOT) in the English dub, and Yūki Ono (Josuke in JJBA) in Japanese. Tea Knight Cookie is also an epic tier cookie but he is a charge type, leading the cavalry into battle I suppose. I wonder if he has any relations to Knight Cookie. I suppose we’ll find out soon enough.

He is voiced by Han Choi in Korean, Jason Marnocha (Keicho Nijimura in JJBA and Gus in Carole and Tuesday) in the English dub, and Hiroki Yasumoto (Germany in Hetalia and Daigorō Banjō in MHA) in the Japanese Dub.

A new update also means new events and there are a number of them coming with these two new characters as well as the fact that Cookie Run Kingdom’s 1 year anniversary is coming up soon.

Game Changing Updates for The New Season of FIFA Mobile