A preview of a destiny embraced.

Assassin’s Creed Valhalla hasn’t been skimping on the size of their expansions, and Dawn of Ragnarok promises even more content. We had the opportunity to attend a pre-briefing about these upcoming projects – yes, plural – with Ubisoft‘s José Araiza, producer of Assassin’s Creed Valhalla Extended Experience and Mariana Gosteva, producer from Ubisoft Sofia. Do note that Dawn of Ragnarok is Valhalla Year 2 content, so there may be spoilers.

Check out the preview for Assassin’s Creed Crossover Stories with Clémence Nogrix here.

Eivor has already gone on two prior, big adventures, with Wrath of the Druids and Siege of Paris. Ubisoft Bordeau’s outing led Eivor to face the cult of Children of Danu in Ireland, while Ubisoft Singapore put together – as it were – a war-torn Frankia under the whims of a Mad King.

The Ubisoft branches are showing the talent in these studios across the world, with refreshing experiences to really immerse players into the Viking fantasy. If you wanted a break from the action, Discovery Tour: Viking Age is your opportunity to explore a gamified experience of Eivor’s era, made in close collaboration with historians, archaeologists and teachers for an enhanced learning platform.

The game post-launch has seen quite a few updates, and soon, Ragnarok.

SO, WHAT’S DAWN OF RAGNAROK? 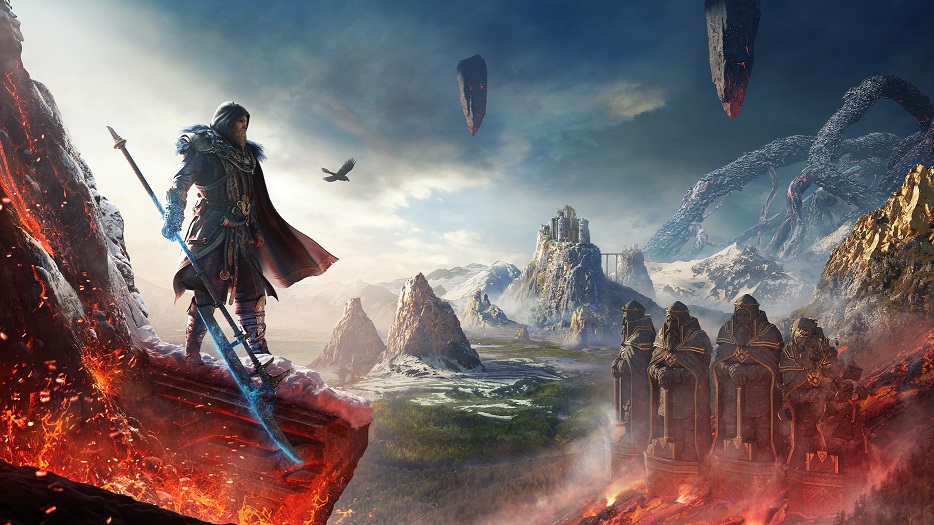 At the helm is Ubisoft Sofia, for Dawn of Ragnarok, the third main expansion for Valhalla. Their prior projects have been Assassin’s Creed Rogue and Assassin’s Creed Origins: The Curse of the Pharaohs.

Dawn of Ragnarok promises over 35 hours of gameplay, wherein you meet a fresh, and intriguing, new cast of characters within a new Norse realm a third of the size of England. Eivor’s legendary saga continues, as they fully embrace their destiny as the Norse god, Odin.

The Norse mythology is, as you might expect, a crucial piece of Valhalla‘s story as a whole. Asgard and Jotunheim have already been included, Svartalfheim their next step in Eivor’s quest. This beautiful, yet hostile dwarven kingdom is being invaded, and Eivor has arrived on a desperate, dangerous quest in order to save their son, Baldr.

Even veteran players will need the time to adapt to this new environment. One of your key tasks will be to gain the trust of the dwarves. Sure, you could charge blindly in to save Baldr, but how far will that get you? The dwarves can share their knowledge of the land, IF you can find the various scattered, exiled, dwarves, and bring them together.

Of course, new enemies will stand in your way. The fiery Muspels of Muspelheim, with archetypes such as the Flame Keeper who can resurrect fallen enemies, are just one of your obstacles. Manifestations of Surtr’s fury can charge at you and explode; simple, but deadly. If you can use their power against them, that could be your best shot, all the while, their growing numbers threaten to overwhelm you. You can directly face Surtr too: should you be able to best this fire giant, godly powers can be at your disposal. In order to counter these foes, the dwarves can furnish you with a bracer known as the Hugr-Rip. Steal the powers of your vanquished foes, allowing you to shapeshift, infuse weapons, teleport, and so much more. Your preferred playstyle from combat to stealth to exploration will get more options opened with this addition.

With all that said and done, prove your mastery of your new tricks with the Valkyries’ Challenge. A swathe of rewards could be yours, if you succeed in the trials against foes, new and old.

That’s only a taste of the preview that we saw. There’s still time yet to the expansion’s release, so stay tuned. Purchase the expansion between now and 9 April 2022 will receive the Twilight Pack, which includes the Dellingr’s Envoy Raven Skin, the Havardr Lynx Mount, the Twilight Gear Set and the Algurnir Dane Axe Weapon. Assassin's Creed: Valhalla
Publisher: Ubisoft
Developer: Ubisoft Montreal
Release Date: 2020-11-10
Epic Games Store, Microsoft Windows, PlayStation 4, Xbox One
Become Eivor, a Viking raider raised to be a fearless warrior, and lead your clan from icy desolation in Norway to a new home amid the lush farmlands of ninth-century England. Find your settlement and conquer this hostile land by any means to earn a place in Valhalla. England in the age of the Vikings is a fractured nation of petty lords and warring kingdoms. Beneath the chaos lies a rich and untamed land waiting for a new conqueror. Will it be you?
Tags: Assassin's CreedAssassin's Creed ValhallaAssassin's Creed Valhalla: Dawn of RagnarokUbisoft
ShareTweetShareSend
Previous Post