We got to check out the upcoming expansion for The Elder Scrolls Online High Isle: Legacy of the Bretons– an expansion that brings with it political intrigue and, more importantly, the heart of the cards.

Like other chapters in the Elder Scrolls Online, High Isle an be accessed as soon as you beat the game’s tutorial- You can jump in with your friends without having to worry about grinding out hundreds of hours of past content to get to enjoy the newest edition to the Elder Scrolls MMO.

The Elder Scrolls Online High Isle: Legacy of the Bretons will release on PC, Mac and Google Stadia on June 6th, while it releases on consoles on June 21st .

New Quality Of Life For The Discerning Adventurer

On top of that, this expansion also brings with it big quality of life changes. You’ll now be able to save your Mundus Stones in the Armory, and the addition of a new segmented radial menu means you’ll be able to access your items quickly even if you’re on PC.

I’m a really big fan of the idea of radial menus- I’m terrible at pressing buttons at the best of times, so being able to choose my items without having to reach all over my keyboard is a great addition.

Welcome to the Systres Archipelago Located to the southwest of Tamriel, the Systres Archipelago marks the setting of your adventure in The High Isle expansion. The story will take you between the main two islands- the high and mighty titular High Isle, as well as the rougher Amenos prison island.

The High Isle expansion for Elder Scrolls Online sees a secret conference being held- one that could potentially bring peace between the three banners that make up the major factions of the Elder Scrolls Online. However, this all goes awry when the leaders of said factions go missing in transit- and all signs point to the mysterious Ascendant Order.

Working with various allies who just want to see peace come to Tamriel, you’ll need to get to the bottom of this- and the early parts of the expansion see you doing just that, as you explore everything from shipwrecks to lighthouses in search of just what happened to these missing delegates.

The Problem With Pirates Of course, it’s not just story content. Elder Scrolls Online High Isle: Legacy of the Britons will also see the addition of a 12-man trial called Dreadsail Reef. Taking its cues from the previously released Rockgrove Trial, Dreadsail Reef has some exciting features waiting for players- including some use of platforming and terrain as you deal with the pirates plaguing the Systres Archipelago. It’s a great example of the entire High Isle in macrocosm- you build decks with patrons, and you’ll do everything from paying Gold to play cards, hiring Agents as well as stealing favor from Patrons before your opponent does if you want a resounding victory.

The cards themselves aren’t too complex- while the assets we were shown were very much in-progress, every card has three major components- its cost, its effects as well as its combo effect. That is to say, cards gain more effects if you chain them one after another, all following the same suit.

The deck customization also gives the game huge Caravan vibes- you’ll be able to travel the world to find new NPCs to duel, or simply take on other players too for various in-game rewards.

When we say travel the world though, we really mean it- the developers have confirmed that Tales of Tribute has taken over more than just the High Isle, and you’ll be able to find NPCs across Tamriel looking for a quick game if you so desired.

Plenty To Look Forward To 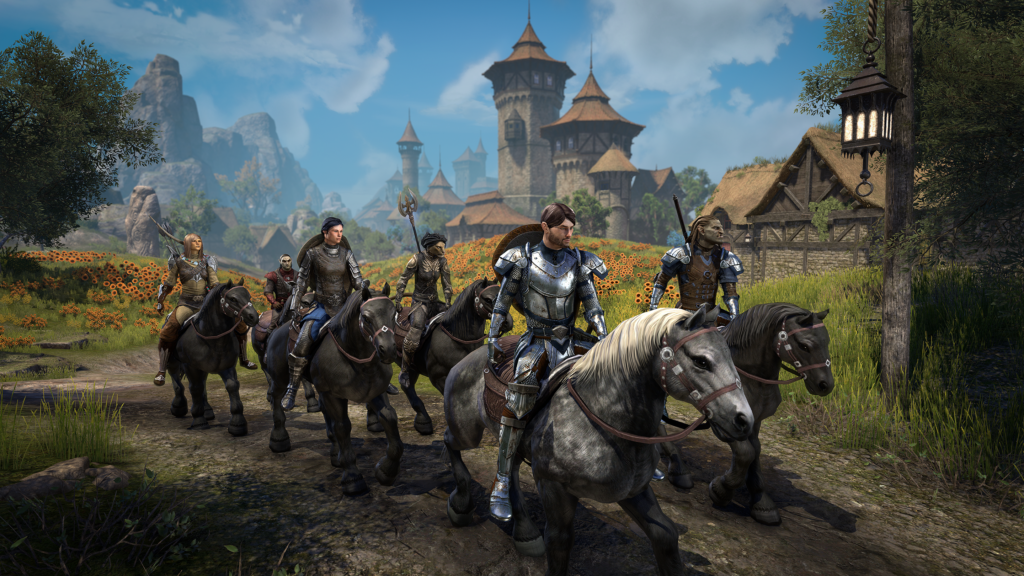 If you’ve been hankering for more of the Elder Scrolls Online, you’re sure to get your fill with The High Isle: Legacy of the Britons. I’m always a fan of political intrigue stories- especially when they also involve beating up villains to get answers to get to the bottom of what exactly is going on.

Be it a story hound, Trial fan or simply a card game enthusiast, High Isle is a great time to jump into Elder Scrolls Online. The fact you can access it from the get-go is a great testament to this- just finish up that tutorial and hop in the next portal and start wailing on some Ascendant Order jerks and be home in time for a game of Tribute.

Of Card Games And High Fantasy – Elder Scrolls Online The High Isle: Legacy of the Bretons Interview With Rich Lambert

Of Card Games And High Fantasy - Elder Scrolls Online The High Isle: Legacy of the Bretons Interview With Rich Lambert