Sword Art Online: Alicization Lycoris launched 10 July 2020 for PS4, Xbox One and PC via Steam after an initial delay due to issues arising from COVID-19. As the name suggests, the game follows the Alicization arc storyline, taking players to the “Underworld”, a virtual world populated by AI essentially indistinguishable from regular people, with rules of their own. In the franchise’s latest RPG, Kirito begins his adventure anew, with new/old friends and enemies alike.

There’s a staggering number of playable characters that you can add to your roster, including:

… as the revealed roster, with more still over the course of the story. After the first chapter, you’d be able to customize Kirito, changing his name, gender, hairstyle, eye colour and such forth even if you’re still ostensibly playing Kirito. At least for a bit, you could imagine being someone else being in the starring role.

The game is divided into several chapters, each having a visual novel style of recounting the story so far, broken up by the action and combat sequences. The visual novel parts tend to drag out, disrupting the action RPG that many people arguably would have picked up the Alicization Lycoris for. It also retreads a lot of the anime’s story which fans are probably well acquainted with, so a lot of it can be skipped just so that you can get to the parts where Medina is featured, since she’s the original character for the game.

In the chapters, players will control Kirito and his party members to take on quests together. The main story is quite lengthy, and you could opt to just follow the questline, fight the bosses along the way and complete the game. Otherwise, you can stray off the beaten track to explore the Underworld realized in this game engine, discovering new sights, coming across side quests, treasure and other challenges. 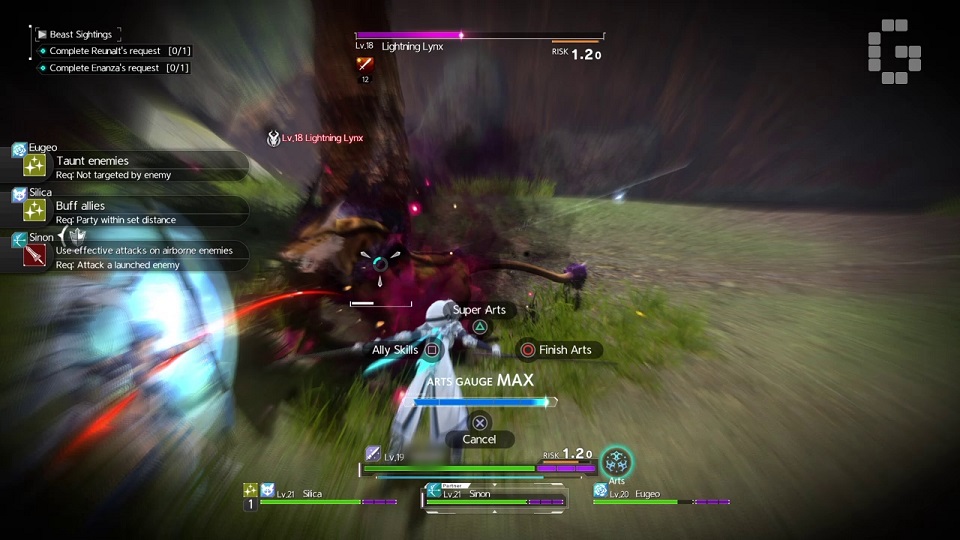 As much as they’re called “side content”, it becomes practically mandatory at some point as you come up tougher enemies, so the way to get stronger is to seek out everything else. Grinding out the quests does give the feeling of playing an MMO, which, depending on how you feel about frankly mindless quests, can be maybe good or bad thing. You can break up the monotony with other systems like fishing, cooking and plant gathering, reminding oneself of open world-esque gameplay when you’re tired of slapping around the same ol’ monsters. Kirito and friends will be able to utilize moves known as Sword Skills, able to have four of them at a time according to the branches of the skills or weapons they use during combat. The skills in turn have their own SP values, and you can chain them seamlessly during battle. This plays into the chaining system, where successive skills can deal higher damage to the enemy. On top of this is the Sacred Arts system, where you can unleash Arts with varying effects, from HP restoration to different elemental attacks in a Chain Burst. Needless to say, using the right Arts at the right time can make or break a fight. Besides going gung-ho and attacking, blocking is also possible. This goes the same for your enemies, which can have their guards broken. Special skills can make breaking guard easier against your foes to land devastating Arts on them. To make things easier, EX skill attributes can be gradually unlocked on characters to vary up their behaviours when controlled by the AI. Set them up as you like, be it more aggressive, offense-oriented AI or more defensive stances. The current maximum level is 50, which may not leave as many points as you’d like to distribute.

THE PIXELS OF THE UNDERWORLD

The game visually has improved when compared to the previous title, but not by leaps and bounds. The controls are at least smooth so that the chaining of skills feels satisfactory with accompanying flashy effects. It doesn’t have the “weight” behind them, but is generally passable. Whatever it is, the game just feels really slow. If a character gets knocked into the air, they fall as though through jelly and switching between characters doesn’t match with the rapid action you would want. Maybe the slower pace would be much more comfortable for Sword Art Online fans used to it from the previous titles, but if you’re playing it looking for a new RPG experience, it’s unsatisfactory.

The game is bogged down with optimization problems that will take some time to patch, and compared to the previous titles of the franchise, the polish is quite lacking, perhaps partially to blame on the pandemic disrupting work. There is a lot of content that players can enjoy in the game even if it is padded out due to lengthy visual novel sections, and on the PS4 Pro, a lot of time is spent merely loading in. For players who are not already existing fans of the franchise, the heavy loading of plot does not get the best pacing. While the character customization is welcome, it does not have any effect on the cutscenes, so if you were hoping for a degree of immersion, you will not find it here. When you do get to fight, that’s where the game really shines, so savour them when they do arrive. There is also multiplayer, but it’ll be quite a while before you actually get it unlocked, which seems fair to get you to know the story, while also being a slog.