It is time to put on your gas masks and return to post-apocalyptic Russia as it is time for a review of Metro Exodus on the PS5.

For those who are unfamiliar, the game is a sequel to Metro Last Light and is based on Dmitry Glukhovsky’s Metro novels. Note that this review of Metro Exodus PS5 will not be going into details about the story or gameplay. It will focus on the new features that come with the upgrade.

That said, let’s dive into this Metro Exodus PS5 review.

Metro Exodus was originally released back in 2019 and was already a visually impressive game when it launched. As you might expect, the PS5 upgrade kicks the game’s visually up a notch. Having played the game on PC, it is not that big of a graphical leap. However, PS4 owners are in for a treat as the improvements feel considerably better. As a free upgrade to the PS4 version, Metro Exodus PS5 comes with 4K resolution, ray-traced global illumination and emissive lighting effects. While ray-tracing and visual overhauls is the norm now for most PS5 remasters, Metro Exodus PS5’s graphical upgrades are a lot more obvious compared to other remasters. This is thanks to the game’s already incredible atmosphere. The enhanced Lighting effects really brings out the dilapidated scenery of the post-apocalypse. Even little moments like transitioning from a building to a snowstorm outside really amps up the immersion. There is a gameplay setback from the better visuals, though. Whilst trying to review Metro Exodus on the PS5, the environments look fantastic overall, but dark areas feel way too dark. Understandably, some players might prefer this because of realism, but I found it difficult to navigate through these segments, even with the flashlight or lighter. Having to pick up items and resources in these areas was a chore as they were extremely hard to notice. While this problem can be circumvented by turning the brightness up, the experience will not be the same. 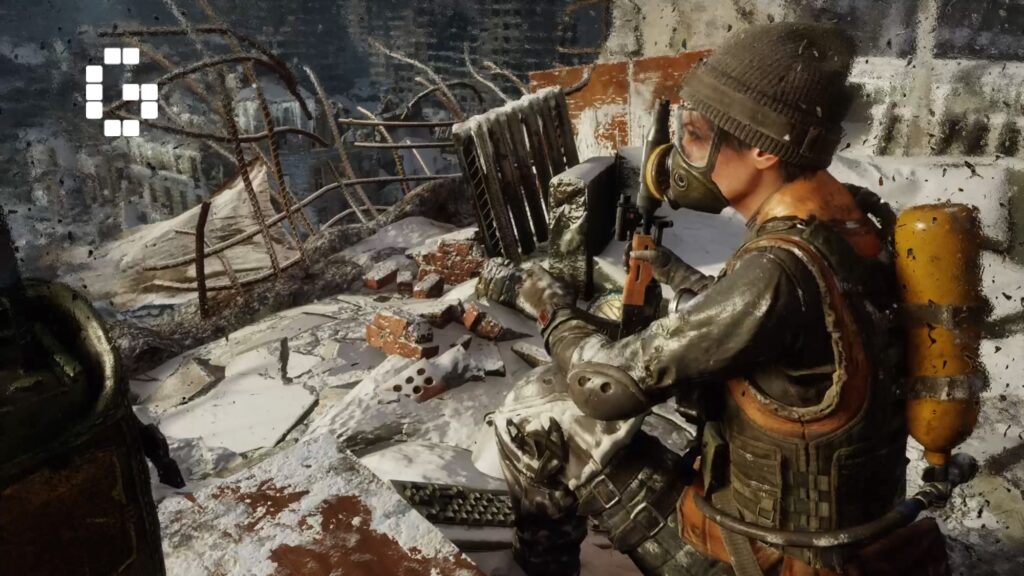 While PC and PS5 owners can debate over which platform the game looks better on, the PS5 definitely takes the cake for immersion. Thanks to the game’s great implementation of its Dualsense features, firing weapons feel a lot more realistic (not that I have ever shot a firearm before). Different weapons have different resistance to them when shooting. Each weapon has a different feeling to them when firing, which helps to give each gun a layer of personality. As for the haptic feedback, the game uses rather typical static vibrations. It feels decent, but it’s nowhere near the level of kinesthetic pleasure like that of Ratchet and Clank: Rift Apart. There is also no option to turn haptic feedback off, so if you got tired of it like I did, tough luck for us. Better realism aside, the PS5 version also comes with much quicker loading times, as one may expect from the superior SSD storage. The game does not have as many loading screens as other games, but it is still a welcome addition. Also, Metro Exodus PS5 has features such as Activity Card which lets us continue the main story instantly and Game Help which provides guidance and pointers when necessary. Ultimately, it is clear that the PS5 version of Metro Exodus is a vastly improved experience when compared to the PS4 version. If you owned Metro Exodus on PS4, you should definitely make use of the free upgrade. The PS5 version makes an already amazing game even more phenomenal.

However, if you owned Metro Exodus Enhanced Edition for PC, then maybe it is fine to give the PS5 version a pass. In my opinion, the PC version looks better than the PS5 version, but of course, whether that will be true for you depends on your PC’s hardware as well.

Regardless, this game is a fantastic experience for PS5 owners. If you have a PS5 and have not played Metro Exodus, then you should definitely get the game.