Slime ISEKAI Memories’ Masked Hero – Who is She And Should You Pull? (No Spoilers)

Slime ISEKAI Memories is teetering dangerously close to spoiling anime fans by adding the new character, Masked Hero, to the game. While the game never reveals the character’s real name, her in-game animation features her without her mask, something that has not yet been shown in the anime.

Who is the Masked Hero?

Eagle-eyed fans of the anime would recall seeing the Masked Hero back in season 1. She can be seen for a few seconds during the 1st OP of season 1. In the anime itself, we first see a short glimpse of the Masked Hero in episode 1, during Veldora’s flashback, where it was revealed that she was the one who sealed him with Unlimited Imprisonment. Later on in episode 8, we see the Masked Hero again in Shizu’s flashback. Shizu and the Masked Hero clashed briefly, before the latter hands the former her Anti-Magic Mask. Without going into the light novel, this is all we know about her in the anime. The Masked Hero is strong enough to seal Veldora, but how strong is she exactly in Slime ISEKAI Memories? [Time Traveler] Masked Hero is a space-element unit who deals physical damage. Stat-wise, she possesses high ATK. Her Secret Skill is a multi-target type, but it deals 290% damage instead of the usual 270%. While it’s sadly not single-target, her other skills more than make up for it.

Her first skill outright gives your whole team another turn, essentially allowing you to move 2 turns in a row (turn count does not advance). It also has the added effect of increasing your Divine Protection gauge by 10% (20%). Note that the extra turn effect can only be used once per battle. If you use it again in the same fight, only the Protection gauge increase effect will take place. The cost of this skill is 40 (30) skill points.

Her second skill is basically a guaranteed crit buff for your team while reducing enemy crit resistance. It increases your team’s crit rate by 80% (100%) for 1 turn and decreases all enemies’ critical resistance by 30% for 1 turn. It costs 65 (55) points.

Without a shadow of a doubt, [Time Traveler] Masked Hero is the most broken character in Slime ISEKAI Memories. Guaranteed crit is already a good reason to rank her amongst the best units, but 2 turns in a row? The damage potential and versatility this provides are unmatched. This is a must-pull, enough said.

Masked Hero isn’t the only character appearing in this banner, we also have Space Milim and Space Veldora (Protection unit). 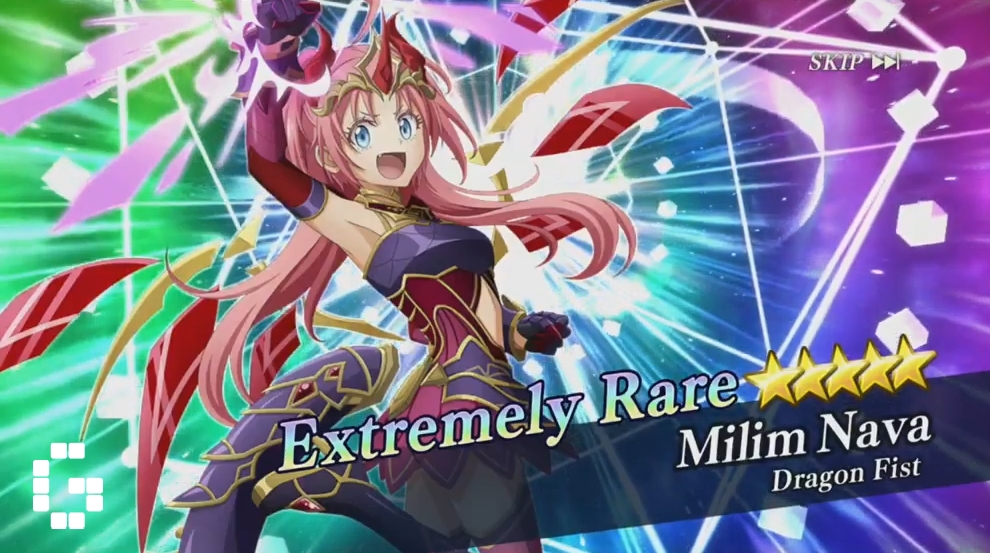 [Dragon Fist] Milim Nava is a space-element unit who deals magical damage. She also has high ATK. Her Secret Skill is a single-target type, but it deals 470% damage instead of the usual 450%.

Her 2nd skill is a self-buff, giving the Drago status effect and 10%(20%) ATK buff to herself for 1 turn at a cost of 25 (15) points. Drago increases the effectiveness of all stat-increasing buffs by 1.2 times.

Space Milim resembles Octagram Milim rather closely. Both have incredible team buffs and self-buffs while also capable of dealing incredible damage potential through their Secret Skills. She may not be as broken as Masked Hero in terms of versatility but she is still a top tier unit and easily one of the best in the game.

[Mighty Roar] Veldora Tempest is the Protection character featured in this banner. He passively buffs space and dark damage by 16% and 8% respectively.

When you activate his Protection skill, there will be multiple effects:

Overall, the Isekai Revelry banner which you can get all these characters from is easily a must-pull. Both Masked Hero and Space Milim are overpowered and Space Veldora is just really good. Spend all your Magicrystals for this banner. I highly doubt Isekai Revelry Part 2 can match the power creep that his banner brings.