That Time I Got Reincarnated as a Slime ISEKAI Memories just released and thankfully, it is pretty easy to reroll in this game!

It’s highly recommended to reroll in the game, especially if you are free-to-play. Rerolling in the game takes about a minute, so it’s quick enough to do without wasting too much time to actually progress in the game.

In this guide, we’ll teach you how to reroll in That Time I Got Reincarnated as a Slime ISEKAI Memories, what is considered a good reroll and who to aim for.

When you play the game for your first time, go through the game’s prologue. As part of the tutorial, the game will let you do your first 10 pull. This is the point at which you can start rerolling.

The whole process takes about a minute. Once you’re happy with your pull, you can proceed with the game.

In terms of value, Protector Characters are much more important than Battle Characters in the long run. 5★ Protection Characters have a 1% drop rate, compared to 3% for 5★ Battle Characters. They’re also the backbone of your whole team as they increase everyone’s damage (if they’re of the correct element).

Here are all the 5★ Protection Characters available in the game:

Out of these 7, Veldora Tempest: Storm Dragon is probably the best Protection Character, as wind element is the only element with 3 different 5★ Battle Characters at the moment, 2 of which (Hakurou: Instructor of the Flashing Sword and Milim Nava: Dragon Majin) have extremely high offense. Realistically, you should settle for whichever 5★ Protection Character you can get.

If you’re not sure whether the character you get is a Protection Character or Battle Character, you may refer to the following images: 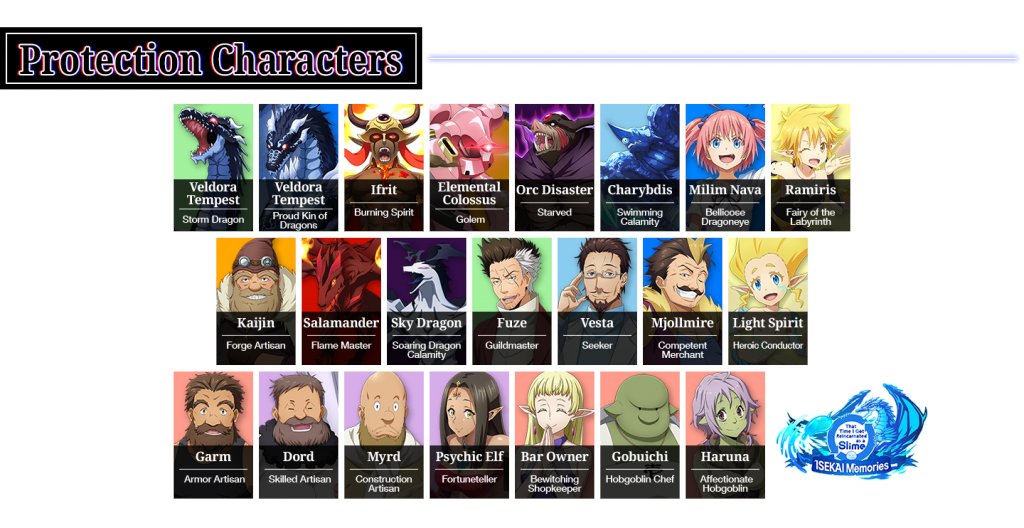 We hope that you’ll get the favourite characters that you want in That Time I Got Reincarnated as a Slime ISEKAI Memories! For more updates related to the game, follow its Facebook page.

You can also check out our:

Try out Metroid Dread this halloween with a new free demo