The last of the previously announced updates for the Monster Hunter Stories 2: Wings of Ruin roadmap is out, featuring new Monsties in Gold Rathian and Silver Rathalos.

Both the Gold Rathian and Silver Rathalos are available through the Rare / Subspecies Co-op Quest, with a S. Elder Lair 2 level quest boss (post-game level content) for a tough challenge. However, the eggs for both the Monsties can be found in the non-boss rooms, and they’re also listed as Alcala region monsters. The last part means you can potentially obtain either of these eggs through Rare / Super Rare dens. Co-op will still be faster, either way. 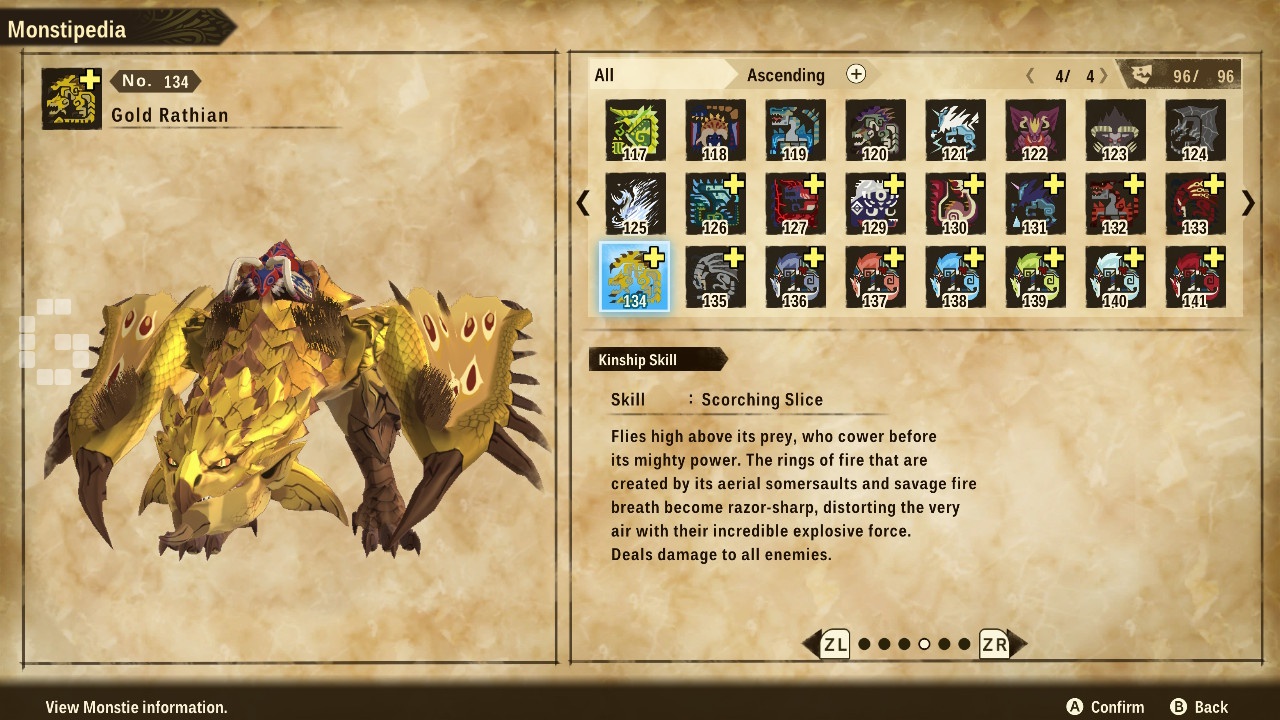 Queen’s Judgement is the the Gold Rathian Speed version of fellow new Monstie, Silver Rathalos King’s Judgement. 20 Kinship cost is pretty cheap. Lunar Gene will likely see frequent use in PVP where people would typically bring buffs – e.g. Azure Voltage, Valiant Flare – and at 2 Kinship cost, it could actively discourage buffing. Lunar Gene will probably be less impactful in PVE besides against specific matchups e.g. Rajang, so PVE players can mostly ignore this one. This Monstie’s stats encourages you to make it your “main” offensive Fire Monstie, with Fire Attack at 10 – ties with Teostra – and Crit at 8. Its weakness is Water, which at this point in the game’s lifespan, does not have many strong Water Monsties. Silver Rathalos has plenty of chances to be an unanswerable beast until then.

You’d probably be looking at Flare Burst as your new Fire damaging skill. Compared to Teostra’s Supernova, Flare Burst costs 48 Kinship to Supernova’s 54. Genes like Harmony means it can be even cheaper, and you don’t lose out on damage with Flare Burst either. The Burn chance is almost negligible if you’re planning on PVP since its damage isn’t particularly high. As mentioned for Queen’s Judgement on Gold Rathian, King’s Judgement on Silver Rathalos is essentially the same. With Silver Rathalos offering Solar Cry, upgrading Ratha’s genes to max is now possible. Potential combinations from a fully upgraded Solar Cry with Harmony / Soul Kinship genes may enable some really fun combinations.

Silver Rathalos gives an arguably superior Fire Monstie offensive skill in Flare Burst, which would likely be one of your priorities, having a lower cost than Supernova while having the same damage.

Both Gold Rathian and Silver Rathalos offer skills PVP enthusiasts could plan on farming: the former having Lunar Cry to dispel those pesky buffs, and the latter’s Solar Cry’s potential for Kinship combos.

Silver Rathalos will likely be an extremely potent Monstie until the game gets strong Water Monsties to counter it.