Lego Brawls should be pretty self-explanatory from its name: a brawler / arena fighter in the vein of Super Smash Bros. It does have things that hold it back, so we might as well just get right into it.

Blinging out is part and parcel of life, and it’s no different in this game. You start off with a standard preset for the tutorial, then get unleashed into the meat of customization. As a LEGO figure, you can pretty much just change every piece that you’re allowed to. That said, there will be some pieces that just won’t fit seamlessly due to missing additional details.

Once that‘s done, it’s time to figure out the loadout. I only know fashion, not meta, especially not when I’ve just started in the game. Regardless, choices must be made for my main weapon, power ups, and a mount (!). Power ups are obtainable from breaking shiny cubes in the stage, while the mount can be used to ram enemies for massive damage while offering some protection. 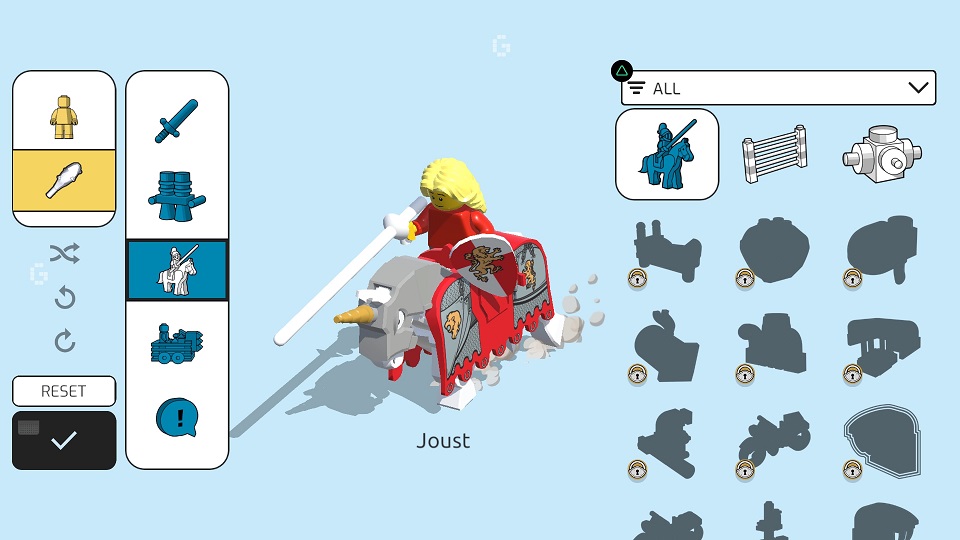 The customization is very flexible, so you can swap out anything you like if you figure something doesn’t click with you. All of them seem viable except the Jetpack, so there’s that. The user interface could stand to be improved, since all these options can be overwhelming.

For actual settings themselves:

Pretty limited, but it is what it is.

Game mode wise, there’s… not much. The two main ones are Brawl and Party: Brawl is where you can play against bots offline which contributes to your progression to unlock cosmetics, then Party for Local Multiplayer for up to 4 players with the Online mode available in Versus and Co-op modes. You’ll find the typical arena fighter experience through Free-for-Brawl while Co-Op is more to a “capture a point” battle. While the modes themselves are fun, the actual pacing is highly questionable. Matches feel like they’re over in a blink of an eye, leaving barely any room for potential comebacks. You could pretty much breeze through every single map and mode in under an hour. Think about it: you’re getting into the groove of the game, and then it’s over. Free-for-Brawl is an option for Co-Op mode, though it’s unlikely you could get that if you’re not with friends. Versus mode also seems to be scuffed, locking me into the character screen and only giving the option to share an Invite Code. At least the matchmaking is quick and there’s Cross-Play support. I think you know what to expect from an arena fighter / brawler, but even by those standards, LEGO Brawls is far too simplistic. I’m not the one going to be executing those fancy combos, but the more skilled don’t even have the option to with only standard attacks, dash attacks and a ground slam for your core moves.

A simple moveset is one thing, controls is another. Cancelling commands or even executing them doesn’t flow that well. If nothing else, abusing the dash move seems to be the way to go to since you can use it to ram into enemies or zip across the arena. Your skill level can be complemented with the power-ups too. Stages you get let loose in are styled after some pretty iconic series including Ninjago, Jurassic Park, and more. The layouts are pretty simple, with the spice being the unique arena gimmicks thanks to power-ups that are obtained only to specific stages: summoning dinosaurs at the Jurassic Park, grabbing Poseidon’s Trident to control a Hydra… the power-ups are definitely ones to contest for.

Progression comes from first choosing a theme based on a property in the LEGO universe. Regardless of outcome, matches will earn you Studs to unlock items from your chosen theme, akin to a Battle Pass. While the progression itself is pretty fast, being forced to “master” each Brawler before you get to unlock another one just doesn’t feel great. On its own, LEGO Brawls isn’t Bad. However, it is lacking in many places with not much content, being too simplistic with controls being not as responsive as I’d like, and the forced progression. The saving grace is the customization, which I don’t think is saying much when that isn’t the primary selling point of this game. While I’d be fine with this for a mobile release, not adding more to a full-fledged console version feels like a missed opportunity.

It would make for a pretty okay brawler for the younger ones, at least. LEGO Brawls
Developer: Red Games Co.
Release Date: 2019-09-19
iOS, mac os, Nintendo Switch, PlayStation 4, PlayStation 5, Steam, Xbox One, Xbox Series X|S
Dream up the ultimate Minifigure brawlers and bash your way through all of your favorite LEGO® themes in the first team action brawler set in the LEGO universe. Play with friends at home or around the world and see how you stack up against the competition.
Tags: Bandai Namco EntertainmentLEGOLEGO BrawlsRed Games Co.
ShareTweetShareSend
Previous Post

Ed Sheeran Crosses Over With Pokemon For New Song ‘Celestials’