As the name suggests, Knights of Honor II: Sovereign is a sequel to its original real-time strategy game title back in 2004 that takes place in a medieval setting where kingdoms thrive for fame and glory.

Of Knights and Glory

The goal of Knights and Honor II: Sovereign is simple, and it’s to assert dominance over all other kingdoms. There are a few ways of achieve that goal, one of which is through claiming the title of Emperor of the World by gaining favour from all the great powers. Sectors such as Wealth, Society, Culture, Politics, Conquest, and other things will contribute greatly in securing your kingdom rank. This method is probably a challenging path to pursue since you’ll need to compete with the other kingdoms who also grow rapidly for every aforementioned sectors.

Another more relaxing way to achieve your goal would be to develop all of the kingdom advantages, such as the rich provinces that provides all sorts of splendour commodities. And while this method can be rather time consuming, the process for it is rather enjoyable since you can easily make allies and expand your territory as you prosper.

If the mentioned methods just aren’t your cup of tea, you can opt to wage war against all the other kingdoms on the map and conquer them. But of course that would mean that you’ll be in constant state of warfare, even against your allies. 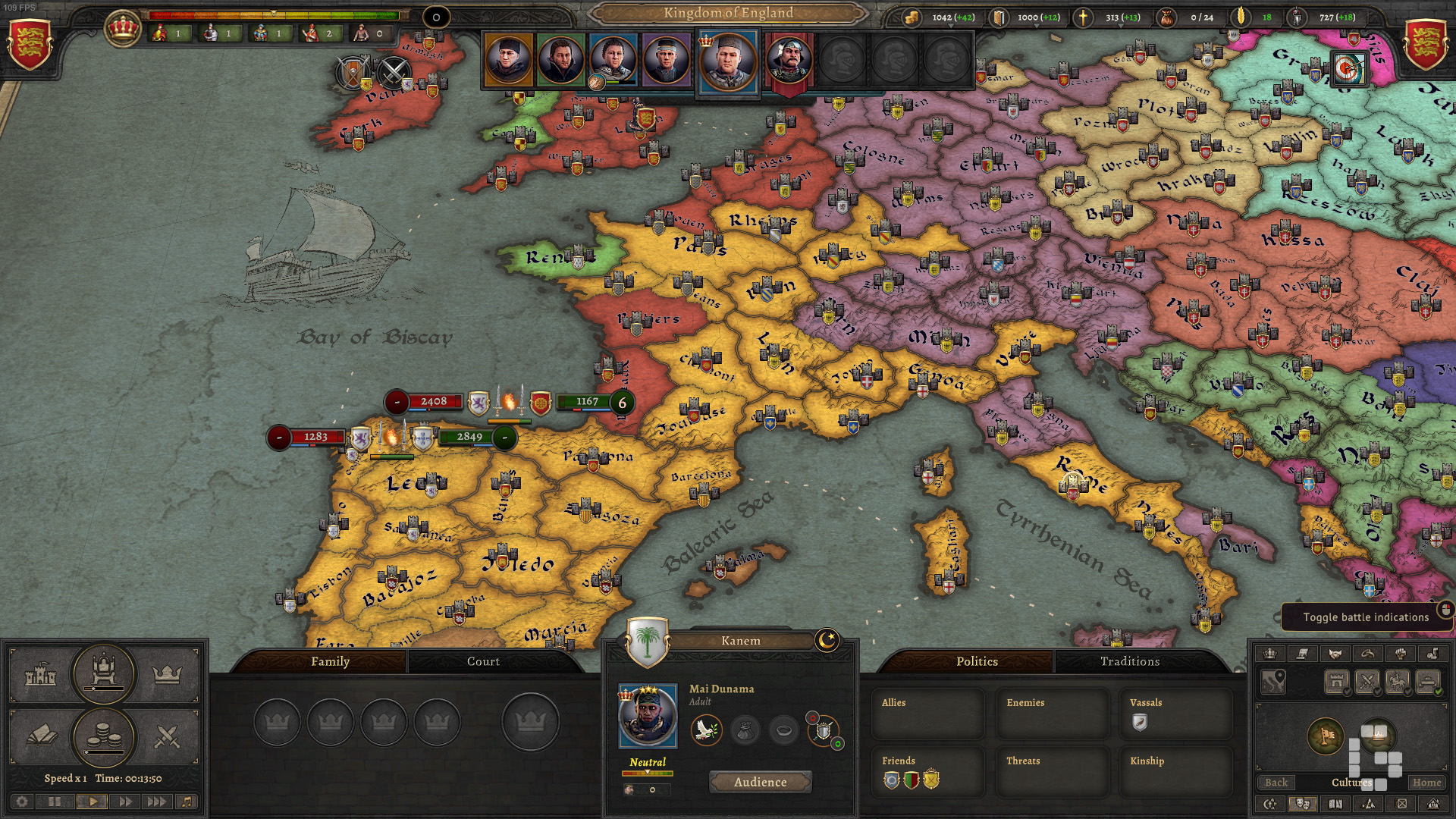 This is by far the hardest way to beat the game, because you’ll need to amass enough military power to invade a kingdom all while making sure their allied kingdoms won’t get in your way. This method can be stress inducing unless you’re familiar with the RTS genre, so it’s recommend to save this genocide path for a second playthrough.

Rome wasn’t Built in a Day Knights of Honor II: Sovereign starts off by letting the player pick a kingdom across Europe, North Africa and parts of Asia to rule over. The game offers an amount of depth in its features, and going through it for the first time can be initially overwhelming but it’s simpler than it looks.

Managing the royal court has players hire up to 8 knights, each with specific classes can provide various of actions, opportunities and governing bonuses throughout the game. One of the most important aspect for each of the knights is that they can govern a province and are able to contribute to the kingdom’s economy.

Players are able to Maximise the advantages of a province by constructing buildings and making upgrades. The overall effect for each of the provinces is a mixture of the starting settlement as well as its features, governor effects, building, upgrades and kingdom-wide benefits from traditions and advantages.

Upgrades provide their benefits to all of the provinces that have the associated building constructed. This is designed to limit the amount of micromanagement needed and making investment in upgrades across a kingdom more powerful.

Diplomacy, marriages, stances, pacts, alliances, agreements and relations with other kingdoms are essential as it plays a deciding factor between victory and defeat. Diplomats are important when it comes to forming certain types of alliances. One of the dominant source of income when it comes for the game is Trading where it must be established and developed if you want your kingdom to grow. With that being said, merchants are especially needed to carry out this process.

Meanwhile, Religion of provinces, kingdoms and characters is a factor that would open up various of different gameplay options and strategies which would affect relations between kingdoms and potentially build up tension within them.

The Crown authority, opinions and stability are important internal factors to keep in mind with and be handled carefully, since it will affect the kingdom greatly and potentially cause rebellions if left unattended.

One way to boost up your kingdom’s defenses or expand your territory would be to hire armies and engage in battles. Mercenaries on the other hand also often come in handy for those who can afford their services.

As the game progresses, espionage is a factor that gets more useful since most of your actions are hard and expensive to achieve.

On paper, there’s a lot of things that you need to digest through, especially through the tutorial process. But the game is surprisingly approachable even if you go in blind without reading up any guides prior. If you would reach a roadblock in the game,  you can access the Royal Library which offers tips on solving some of the kingdom’s problems. With that being said, navigating through the Royal Library can be a bit confusing and definitely needs some work on, especially with the user interface. To Rule a Kingdom

Getting a headstart is important as you can get more things done while securing a higher rank at a faster pace. One of the first things that is recommended is to recruit royal court members and assign them to govern a province, build facilities throughout your kingdom, and approaching neighbouring kingdoms to establish a good relationship with them. Once that’s all set up, the world would then be your oyster, and it’s up to you on how you’d want to progress through the game. If you ever get into a stump on what to do, the game will bring up notifications on task suggestions or events happening near your kingdom that can potentially guide you through.

Another thing that’s highly suggested when beginning your game would be to avoid making enemies early on. Not only that your kingdom is a lot weaker at the beginning, a lot of kingdoms have their own allies, so making an enemy would possibly mean making enemies with more than one. And while sometimes other kingdoms would commend your decisions, there’s just too many risks and how it can affect the opinions even within your own kingdom.

The game shifts to a real-time battle segment when declaring a war against other kingdoms, similar to the Total War games. Though, there’s only so much you can do with it so you can opt to let it play out automatically. On top of a lot of replayability in the single-player campaign, Knights of Honor II: Sovereign also offers multiplayer to spice things up. You’re able to play with up to 6 players from one of the five game modes available, all of which have their different conditions and you can enjoy the game in a faster pacing.

Knights of Honor II: Sovereign is a surprisingly addicting game, despite my limited experiences with this genre. Despite how overwhelming it looks from the outside, the game is very approachable to the point where you’re able to play without needing to rely on guides. There’s a lot of replayability and that’s always a plus in any game.

That said, I personally feel like the game could use some work on the technical side because the performances so far is less than ideal, especially so with the real-time war mode. I’ve also come across a few crashes throughout my time and it can be immersion breaking. Knights of Honor II: Sovereign was reviewed on PC