Even one of the best gaming phones on the market can have room to be even better. To that end, ROG has released a suite of accessories meant to take your mobile gaming to the next level. These range from controller attachments to secondary screens, and even accessories like headphones.

On top of that, some of these accessories even come with a cooling pad, so you’ll never know when you’ll need one of these to really kick your gaming session up to 11.

The runaway star of this set is the ROG Kunai 3, which allows you to game on your phone using a physical controller, rather than touch controls. This is especially great for faster-paced games like PUBG Mobile or Call of Duty Mobile, where having your hands on the screen can be a big impediment to your vision. Compared to previous generations, the Kunai 3 sports a much more ergonomic design. It feels really good in your hands, especially if you have the ROG Phone 3 cradled in between its two halves.

The device itself can connect either via USB or Bluetooth, meaning you’ll always have an option for how you want to play.

Admittedly, though, I’d advise to go for the USB whenever possible, since the Bluetooth has a little bit of a delay. It’s not too much, but it might be comfortable for you since you’ll have something to blame the next time you get killed.

The thumbsticks are also pretty comfortable, using the one-concave and one-convex pattern. I’m really glad the left thumbstick is curved inwards, since it’s a lot easier to grip on to that way. One of the coolest features of the Kunai 3 though is its multiple configurations. Aside from its handheld mode where it cradles your ROG Phone 3, it can also be used independently of the phone, like a regular controller.

This works great with the other accessories by ROG, such as the viewing dock. Basically, if you’re uncomfortable when the phone starts to heat up, this configuration is a godsend since it lets you keep playing your game without having to touch your phone.

You also won’t have to worry about the Bluetooth delay in this mode, since it can connect to your phone via a cable. Really, it’s like they’ve thought of everything with this. Complementing the Kunai, the Twinview Dock 3 lets you have a second screen for your phone. This is great for multitasking, especially if you’re playing the types of games that constantly need guides, or if you just want to watch videos while you farm your favorite Gacha games.

The screen’s no slouch, either. Similar to the ROG Phone 3, it has a 6.59-inch AMOLED FHD screen, supporting up to 2340 x 1080 resolutions. The screen supports up to 144Hz, so it’s really your choice what kind of content you want to watch, since you’ll never have to worry about the screen not keeping up.

Compared to the Twinview 2, this model also sports a much better cooling fan, as well as an impressive 5000mAH battery. Attaching your phone to the dock is also a good way to keep your phone cool, since it’s bound to run hotter multitasking both games and movies. Getting it with the Kunai is especially fun, since the two synergize really well. Aside from the convenience of not having physical buttons for your game as well as an additional screen, it also feels like you’ve just assembled a mecha with your ROG Phone 3 at the center of it. 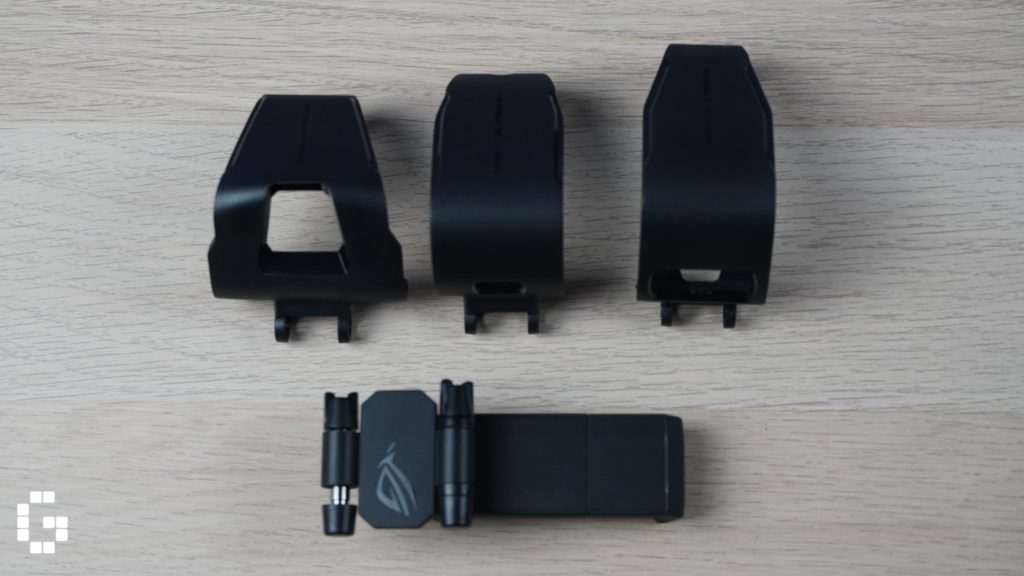 For those of us who dabble in both console and mobile gaming, we might be a little more attached to some controllers than others. In those situations, the Kunai might seem a little overkill, since it’s another controller we’d have to mentally adjust to.

Thanks to the ROG Clip  Game Joystick Bracket though, any controller that can be paired with your phone via Bluetooth can be an extension of your phone.

It supports most modern controllers, meaning you’ll be able to hook up your PS4 controller to your phone and play any games that support a Bluetooth controller. Admittedly, I can see why some might turn away from this. It’s essentially just balancing a phone stand on a controller, and it’s especially easy when looking at a photograph of it to think it’s not very stable. That being said, your phone feels a lot more secure in-hand with the controller.

Although, I recommend using one of the bulkier controllers to put any persistent worrisome thoughts to bed. Controllers like that of the Xbox One are especially good for this, since their bigger size means you can even rest the controller on the desk and not have to worry about the bulk of the ROG Phone 3 causing it to tip over. When it comes do docks though, there’s little else better than the ROG Cover and Connect dock. This essentially lets you hook up your ROG Phone 3 to any HDMI device, from the smallest monitor to the biggest TV.

It can even be hooked up to your capture card, meaning you won’t have to use 3rd party mobile apps if you want to broadcast your sick gameplay for the rest of the world to watch. This means custom stream intros, etc all thanks to this dock.

Once again, this has great synergy with the Kunai, letting you literally turn your phone into a home console by hooking it up to a TV while you use the Kunai to remotely control your games.

Of course, your phone running out of battery mid-stream isn’t a great look. Thankfully, the dock can also charge your phone, making sure your streams stay uninterrupted.

The one downside is that if the game you’re playing doesn’t support controllers, your only option will be to carry the dock as you play. Since this isn’t what the designers had in mind when making the dock, it’s not particularly comfortable. On the plus side, it connects very securely to your phone, so you’ll never have to worry about it suddenly dropping out from under you. Of course, what set of gaming apparel would be complete without a complementary headset. As important as it is to keep your phone supported, you’ll need to make sure your audio experience is up to par with the rest of your gear, or simply be considerate to other people on the train while you do some sick combos in Honkai Impact.

With the ROG Cetra RGB Headset, ROG plans to take a leap towards the future. These wired earphones have skipped using the 3.5mm jack most headphones use, which makes sense considering how many phones are dropping support for them. Instead, these earphones use a USB Type-C instead, which more and more phones are adopting. On one hand, it’s good that they’ve moved the Cetra away from what is ostensibly a dying format for phones. However, not every phone has the necessary hardware built in to support USB-C audio, so this does maker the Cetra harder to recommend as a gift since you’ll have to double-check to be absolutely sure that it’ll work before getting it. Once you get over this hurdle though, you’re in for a good time. The Cetra rocks an excellent noise reduction system, meaning you’ll never have to worry about the hustle and bustle of the real world getting in the way of listening to your sweet tunes.

It also sports excellent sound quality, particularly in the bass department. Whether gaming or working out, you’re sure to enjoy your session while you’re listening with these earphones.

All in all, it’s good to see ROG supporting their phone with so many great gaming peripherals. As a company it’s really easy to say “this is my product, take it or leave it” but acknowledging that not every gamer is suited to tapping virtual buttons on a touchscreen is a great way to push more people into your ecosystem.

Personally, it’s hard to not swoon over the Kunai 3, especially with its plethora of modes it can be used with. Combined with the Twinview Dock 3 screen, you’re basically turning your phone into a handheld console, perfect for gaming.

Suffice to say, mobile gaming has never been more comfortable.