Resident Evil Village is the blowout-marketing success and eighth entry in the Resident evil series, and the follow up to the soft-reboot Resident Evil 7: Biohazard. You continue the journey of Ethan Winters, having taken the advice of Capcom colleague Guile, has gone home to become a family man alongside his wife Mia and daughter Rose.

However, happy status quos make for a boring Resident Evil, and so Ethan is pulled into a world of Gothic Horror with tall Vampire women, werewolves and a host of other monsters as he has to fight to save Rose from an evil cult and get to the bottom of a seeming betrayal. We’re not going to get into spoilers in this Resident Evil review, although there are going to be non-trailer screenshots included.

With its very similar mood and tone to Resident Evil 4 and the popularity of one of its antagonists Lady Dimitrescu, Resident Evil Village enters this review with some pretty big shoes to fill. How does it fare? Read on and find out.

Despite my own aversion to horror , I really love the level design of Resident Evil games. Rather than spend the whole game trying to jumpscare you, the Resident Evil series has been pretty good about being adventure games, first and foremost., Village carries this tradition with great puzzles, and really interesting objectives given to the player that’s more than just combat puzzles.

One thing I really honestly wasn’t expecting from Resident Evil Village was its proximity to the Dark Souls school of level design. Each area is pretty scarce in safe rooms, usually only using one main safe room and maybe having secondary ones if the current stretch is looking kind of long. It gets around this by having plenty of shortcuts, always taking you back to the main saferoom as well as the game’s merchant, The Duke.

I feel like one day someone much smarter than me will go out and write a paper about how meaningful shortcut-opening makes games more enjoyable in the long run, since you always feel like you’ve made progress. Rather than just throwing down a new checkpoint, getting that ladder that takes you back to The Duke actually feels like a reward for persevering, rather than the game asking if you’re tired with all the love and affection of Jecht from Final Fantasy X. Resident Evil Village also has a pretty healthy assortment of puzzles and challenges, all pretty in-theme with each of the four main areas of the game. I’m especially fond of the second area, which is straight-up just an escape room with a laughably horrifying twist at the end of it. Admittedly, the benefit of having four areas is also its weakness- the areas are so different from each other, some are bound to be way less fun than the others.

That being said, if feels like even Capcom knew this, because the four areas seem to vary in length, with the more unique gimmicks never outstayng their welcome as a result.

One way the game kind of falls short is in its bossfights, though. Compared to the actual navigating of the levels, which is an absolute blast, run-and-hide only works so well for the bosses, especially since the fights end up being more about interacting with the environment rather than fighting them. The problem isn’t that I wanted some epic gunfight (one of the bosses actually gives you that)- it’s that actually having to kill Lady Dimitrescu will never be as fun as having to stay out of her sight or navigating around her.

Speaking of combat, I do love how the game bait-and-switches you at the start, by teaching you how to interact with objects by giving you crescendo events similar to Left 4 Dead. You’re stuck in a house, Lycans are coming, better check the room for anything you can interact with like shelves to barricade, or flour bags to shoot for cover.

After those two or three times it never comes up again, but instead you’re left with the knowledge that the game wants you to be thorough in checking rooms for stuff, and all the signs that an object might be interactive after all. It’s really clever, and I’m really glad that there aren’t as many combat puzzles as you’d think in a game about a Lycan infestation.

That being said though, the game is definitely way more action-bent than Resident Evil 7, whose combat was way more focused on stunning enemies to get away rather than ruinning around like the Doom Guy trying to get your daughter back. Even the “power weapons” the game gives you, weapons like Sniper Rifles, Grenade Launchers, explosives- these are more like puzzle solutions than weapons of mass destruction. The Sniper is only really for one enemy, the armored Lycan while the Grenade Launcher and Pipe Bombs end up being saved for slime walls or cracked walls that can be destroyed. On console the game also has laughably aggressive aim assist, helping you line up headshots with ease. This does get in the way in some of the later stages, which feature other targets you’ll need to shoot to open up an enemy’s weakspot. Multiple cursewords have been uttered as the game refuses to let you focus on that, insisting that you waste your hard-saved ammo instead on an enemy that won’t take damage from it.

The guns are also an acquired taste on the PS5, whose adaptive triggers will add extra layers of resistance to make firing and aiming down sights with the guns much harder. Personally I enjoy the flavor of it, but take it with a pinch of salt since some of you might end up feeling like its the triggers causing you to die because you can’t aim fast enough.

A mandatory mention for this Resident Evil Village review is that if you really like the gunplay you’re in for a treat- the game also comes with The Mercenaries, a more arcadey action gauntlet where you fight off Lycans. If you’re not in the mood to do the game’s puzzles, this is definitely a mode to try out and just enjoy being in the world of Resident Evil a little longer.

Storage Solutions Straight From The Bowels of Ikea Another beloved feature in Resident Evil Village is the Attache case from Resident Evil 4. Ethan has to organize his inventory, managing things like stacks of ammo, guns and various crafting items. It’s a fun, incredibly nerdy system, and the real masterstroke is that you won’t have to obsess over it if you don’t want to. Key items and the like don’t go into the attache case, so only equipment like guns or healing medicine is subject to your organizational fetishes.

I think the thing I really enjoy about the attache case is that in any other triple-A game this system would have been deemed heretical and suicidal for a game’s mass appeal, since the truly compulsive might spend a stupidly long amount of time trying to find not only a way to make everything fit, but a system to make sure everything you *might* find fits, too. In a nutshell that’s what makes the Resident Evil games so great- at their best, they reward this kind of bizarre behavior where staring at a grid representing your briefcase isn’t something you skip to get to the fun part, it *is* the fun part. 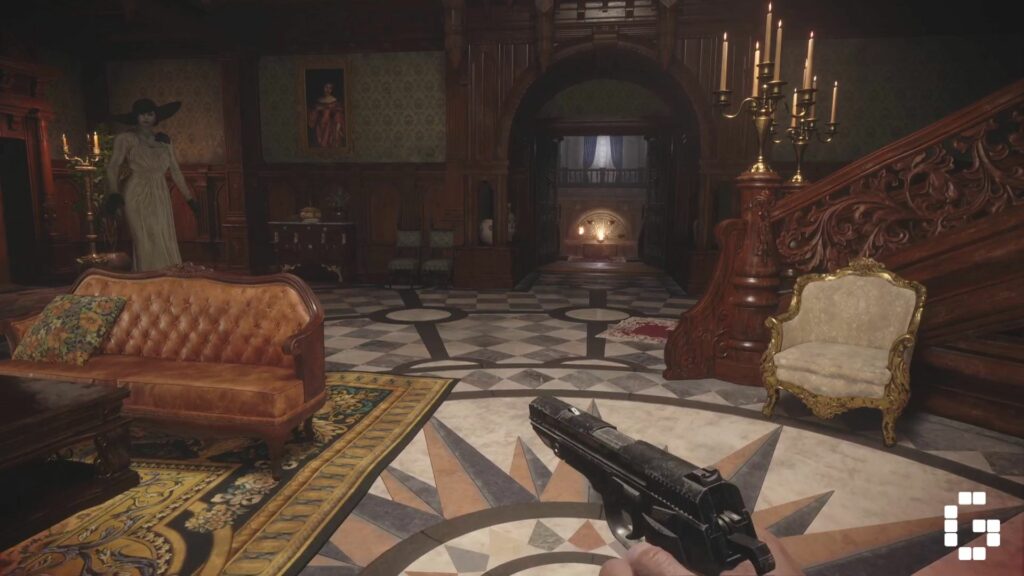 All in all, Resident Evil Village is a wonderful addition to the going-strong Resident Evil Series. Ethan’s a great protagonist, finally embodying Capcom’s desire to have someone who’s actually an everyman pulled into one of their zany universes of corporate mad science and monsters. Admittedly, this isn’t a great first Resident Evil from a story perspective, since the story is very much supposed to be the continuation of Ethan’s arc started in 7. It’s a shame because I don’t think you need to be a senior analyst to know that Village has had by far the most successful marketing, with a high potential of being fans first game.

One other thing that’s important to note is that like other Resident Evil games, Village is to the shorter side, with a regular playthrough clocking you in at under 10 hours, even if you dawdle or take time to savor the game’s glorious visuals. While those with no fondness for replayability may worry about spending full price on Village, just know this is par for the course when it comes to Resident Evil. The game’s fairly optimized for speedrunning, with things like passwords working without you having to actually find them first.

If you want a short, but concentrated dose of a great adventure game with gothic horror undertones, this is definitely the game for you. If you’re a pervert who just likes powerful vintage-dressed women with huge claws, even moreso.