by Ben
in All, Anime, Opinion
Reading Time: 5 mins read

That Time I Got Reincarnated as a Slime is one of the most popular isekai IPs around, but its character design isn’t that hot of a topic. Fans will usually cite the nation-building, progression or just Rimuru (the protagonist) being a badass as the main reason behind its popularity.

While these are definitely valid reasons for people to get interested in That Time I Got Reincarnated as a Slime, I believe it’s the character design that gets fans truly invested in the series for the long run.

Before proceeding, do bear in mind that there will be mild spoilers for the web novel. I’ll only be mentioning the names of some characters and organisations without touching the story whatsoever, so if you’re fine with that, carry on.

Just like how Rimuru evolves from a lowly slime into a Demon Lord in only 2 seasons, the series introduces many characters extremely quickly. While this does a great job at keeping the power fantasy alive by showing how Rimuru’s forces grow in strength and number, the characters suffer as a result.

With so many characters fighting for screen time, a lot of them feel very shallow. Characters in TenSura certainly feel less developed compared to a lot of other anime. Take for example the Kijin, who are arguably the side characters with the most screen time. Through the entirety of seasons 1 and 2, while the Kijin grow a lot stronger combat-wise, they virtually have no character development whatsoever. The only growth that they have is from Shion, who goes from “knocking people out with her cooking” to “making edible but horrible looking food.”

Heck, the side characters who have the most growth in the series are Youm and Vesta, but even then, their transformation barely qualifies as character arcs. Let’s face it—while TenSura does a great job in the power fantasy department, any character who isn’t Rimuru is not well written.

Character Design to the Rescue

While poorly written characters are the bane of a lot of other anime, That Time I Got Reincarnated as a Slime gets away with its character design. However, it’s not the individual character designs that are great, it’s the design of the characters when viewed as a group that shines.

Typically, when we think of character design, we think of how the characters communicate their personalities through their appearance. While I could take just about any character from JoJo’s Bizarre Adventure to illustrate this point, I’ll use a more subtle example:

Here we have Nagatoro from Don’t Toy With Me, Miss Nagatoro. At first glance, her design is basically that of any female high school student we see in anime. However, you can get a feel for what kind of character she is based on her looks.

Her hairstyle is unique in the world of anime, with half of her forehead exposed with the clip. Just like how this hairstyle goes against the norm of a high schooler, we can infer that she’s rebellious and doesn’t sit well with authority. Further supporting this is her shirt, which is untucked.

Her slim, slender figure combined with her tan skin strongly suggests that she practices an active lifestyle. Even though she’s thin, her protruding elbow and wide stance suggest confidence and boldness, as shy people tend to make themselves look smaller.

When you compare Nagatoro’s design with Senpai, the male lead from the same show, and the contrast feels even stronger. You can tell immediately that he’s a nerd purely from his appearance.

In this similar vein, the character design in That Time I Got Reincarnated as a Slime becomes something truly interesting when you view the cast as a group instead of individuals. Rimuru and Milim are the two most important characters in TenSura in terms of significance to the story (and marketing), but their designs couldn’t be any more different. Yet, you get a strange sense of unity between the blue and purple. Blue and pink are two colours that work extremely well together. Just have a look at how it worked for other anime.

The same can be said for the Kijin. Individually, their character designs aren’t anything special, but when viewed as a whole, don’t you also feel the same vibes from this iconic team? If two examples aren’t enough, why don’t we compare Rimuru’s two secretaries, Shion and Diablo together? Both of whom wear suits, vary wildly in terms of personality, yet they feel like they belong in the same group. This sense of “wholeness”, the unity despite difference, complements the power fantasy of That Time I Got Reincarnated as a Slime to a T. This isn’t just a story of Rimuru getting stronger, this is a story of the nation of Tempest—a nation consisting of different races and creatures that couldn’t be any more different, yet they live harmoniously under one banner.

The character design perfectly captures this essence of unity. Even though the individual characters may not be the most well-developed, it’s the character design when viewed through the lens of a group that helps us focus on nation-building. We’re subconsciously identifying the characters as a family or a nation, and in that sense, allows us to focus on this superior aspect of TenSura‘s writing.

The Appeal of a Strong Group

I’ve already explained know how the character design focuses on the group instead of the individual, but guess what? That Time I Got Reincarnated as a Slime has A LOT of notable groups.

Fans will always speculate and discuss amongst themselves regarding the power levels and dynamics of iconic organisations from the series. These discussions help keep the fandom alive and in turn, generate more appeal.

In TenSura, there are a lot of interesting groups and organisations. The Kijin, Rimuru’s Twelve Guardians, Octagram, 7 Primordial Demons, 4 True Dragons, the list goes on and on. Just see for yourself how engaging these groups are within the TenSura community: 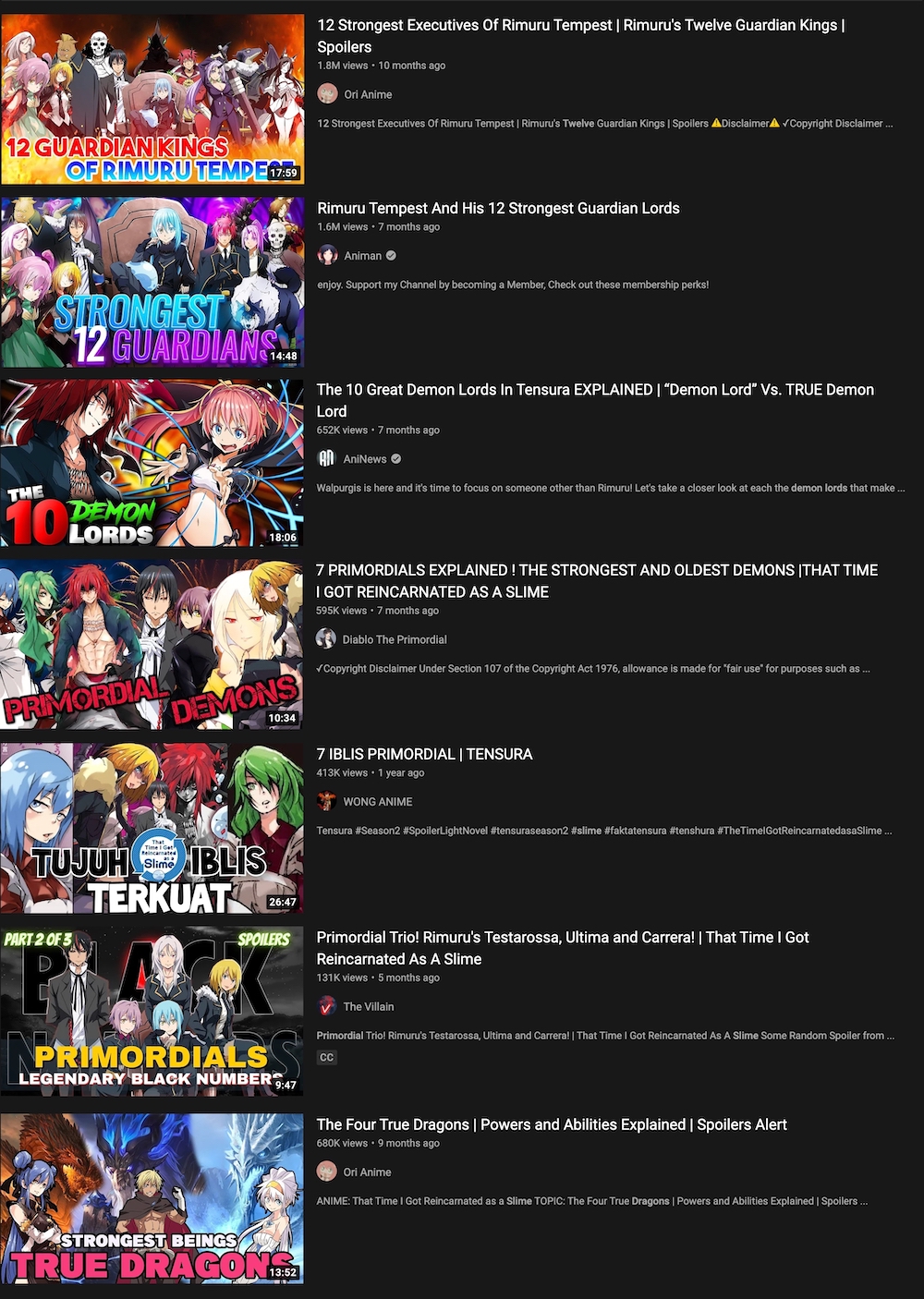 Stay up to date with That Time I Got Reincarnated as a Slime by following it on Twitter.

Tags: TensuraThat Time I Got Reincarnated as a Slime
ShareTweetShareSend
Previous Post

We Learned All About Mocktails, Magical Crime Families And Card Games At This Learn To Play Event For MtG: Streets of New Capenna