Just Dance 2023 Edition is a dance rhythm game developed and published by Ubisoft serving as the fourteenth main instalment to the Just Dance series.

The game is available for PlayStation 5, Xbox Series X/S and Nintendo Switch and features a whole new approach to the Just Dance game, perfect for both newcomers and older players to the series.

Before we can proceed with the gameplay, I’m going to focus on the controls first. Just Dance as a series uses motion sensors for their controls. For example, the early versions use the Xbox Kinect and the PlayStation Camera to detect your movements throughout your session.

For 2023, the controls are simplified into your phone. Download the Just Dance Controller App on your phone, sync it to your game and you are good to go. Your phone will be doing all the motion detecting for you so just be sure you have enough battery for it. Don’t want it to die on you mid-game, yeah? 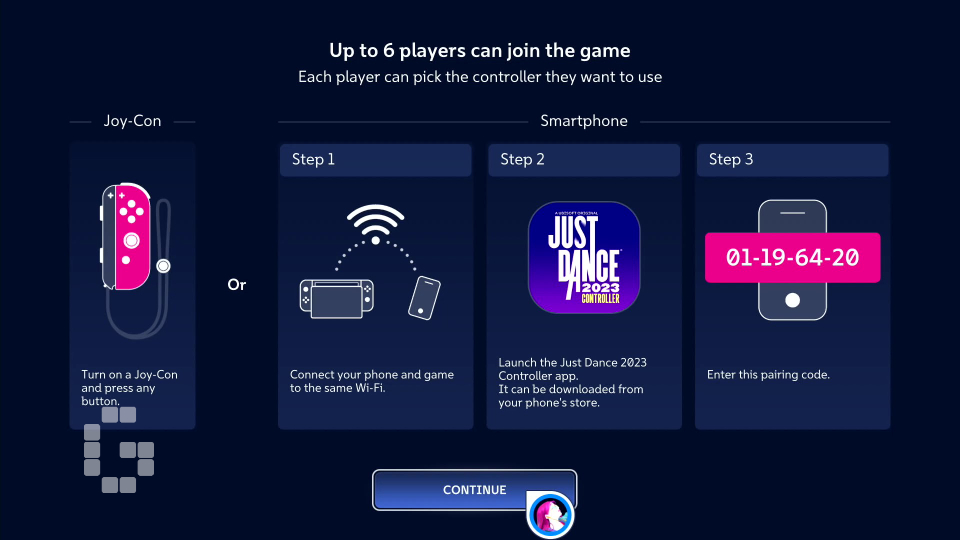 You can still use your console controllers to navigate through the menu and the Nintendo Joy-con also works if you don’t want to use your phones.

Now onwards to dancing, you first need to select a song you’d like to dance to. Each song has their own difficulty; some are fixed while others come with multiple options to choose from. A coach will appear on the screen once you’ve made your choice and all you need is to mirror him to gain scores.

It is a fun dancing game where not even once was I felt bored with dancing. For someone who dances like a stick, I had an easy time dancing to the easy songs but as soon as I ramp up the difficulty, the choreography intensifies and at the end of it, I was already sprawled on the floor, sweating and muscles screaming in ache.

Even then, I had a smile on my face with how much fun I had.

You can technically cheese the game. Since the scores are based on the movement of your controller, you can just sit back and wave it around but where is the fun in that. 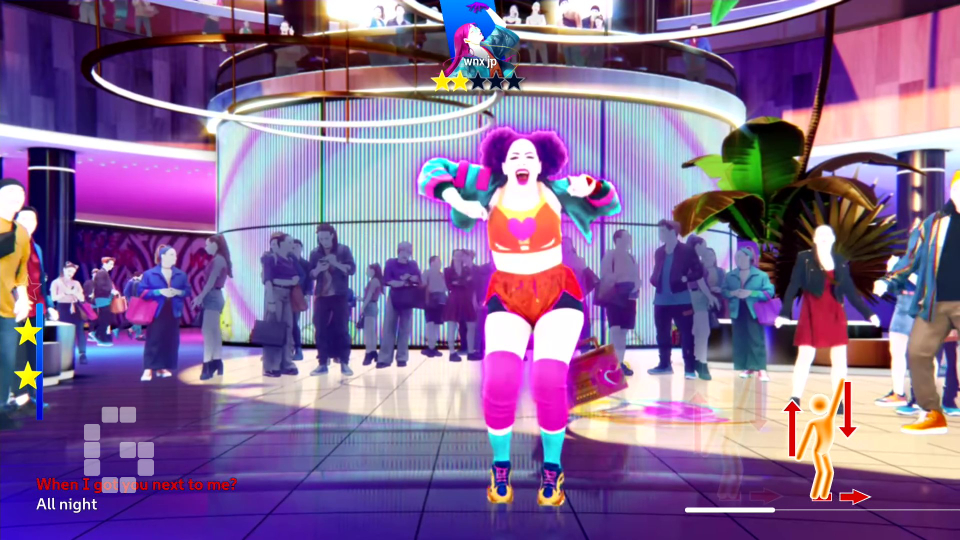 Time to Dance with Style

This time around, Just Dance 2023 took a more galaxy theme to its design. It is full of stars and universes, making us feel like we are jumping through space as we dance. In fact, this game has a plot tied to it, featuring a girl in our reality jumping into the world of Just Dance to take on teams of dancers.

Plot in a dancing game, who would have thought about it?

Compared to the white theme that Just Dance 2022 had, the 2023 version has more colour to it and overall makes the game feel more alive. There was also definitely the tinge of “Matureness” to it that the developer team mentioned in their behind-the-scenes talk.

What is Dance without a Song?

In Just Dance 2023, you will be presented with three options when you start the game; Home, Song and Playlist The Song page is where you can look up the whole library of songs the game has. While new songs are coming to the game in the future, the current numbers are not that impressive even with a Just Dance+ subscription.

What’s more, the songs available are more for the western audiences. I have a fair knowledge of Western English songs but even then, I hardly know half of the songs that are listed out. They are a couple of songs in other languages like Korean and Japanese but they are like a small margin when compared to the plethora of English songs in the game.

Speaking of Just Dance+ subscription, I find it more of a necessity to fully enjoy this because aside from songs, a lot of the pre-made playlist is also locked behind it. 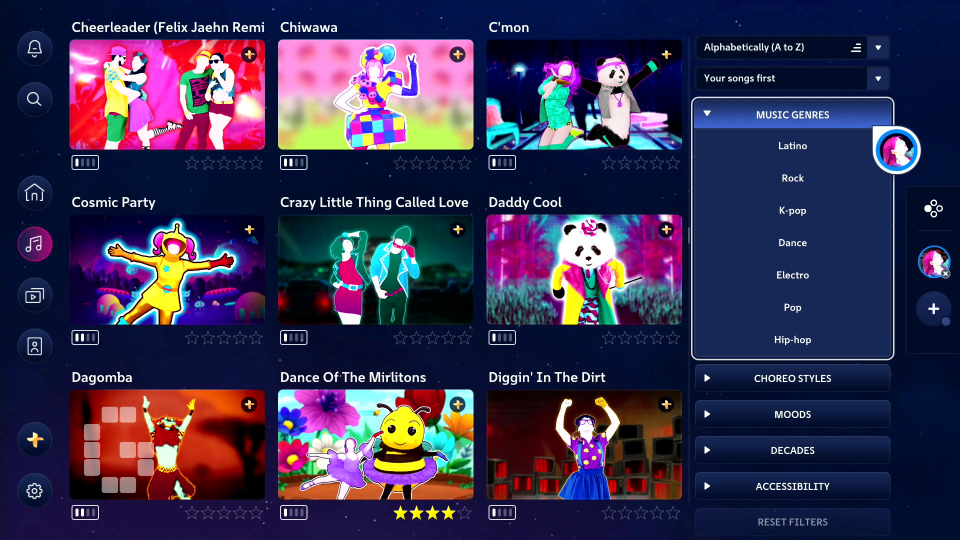 Our very own Personalised Dance Card

From their behind-the-scenes talk, the developers mentioned adding more elements to the Dance Card to truly personalize it as your own. One such thing is the option to add custom accessories to it like borders, badges and even victory celebrations.

The Dance Card also comes with a levelling system that rewards you with more accessories to decorate your card. This is a dancing game so what better way to gain levels other than dancing? It takes Two to Tango

Just Dance 2023 comes with not only offline multiplayer but also online. Unfortunately, I cannot find any friends online to play with so back to offline it is

After grabbing one poor soul to join me, I can conclude that the multiplayer experience feels just nice. Some songs will have multiple coaches if you’re playing multiplayer and they’ll give you different choreographies for each player. Offline, up to 6 players can join in on the fun so long as they have the Just Dance Controller App installed on their phone or a Nintendo Joy-con if you’re playing on the Switch. The only downside to it is getting enough space to fit 6 dancing people.

There is one thing to note about online. If you are planning on dancing to the songs from the Just Dance+ subscription, all the players in your online team must have the subscription as well before you can start.

The game runs pretty smoothly for most of the time but it does depend on your internet connection. There were times I noticed the game lags a little or the songs not displaying properly when the internet’s speed dropped.

Granted it also comes with offline gameplay. However, you’ll need to download the entire library before you can even think of playing offline.

The Controller App also has its own sets of problems. It can get a bit frustrating when the app refuses to connect to the game, coupled with the random disconnects it had. I mentioned earlier about making sure the phone has enough battery for your session. Yeah, that was based on experience.

Aside from connection issues, I encountered no bugs or glitches throughout my dancing sessions.

While there is always a new Just Dance every year, Just Dance 2023 did an amazing job in giving a different feel to the game that is sure to attract even older Just Dance players. The overall design and the approach they took was vastly different compared to past entries.

While I had issues with the connections, it is negligible since it could be a device issue on my end. It wasn’t even too frustrating to the point of throwing my phone off a cliff.

Even if you have a dancing skill akin to a stick being blown by the wind like me, Just Dance 2023 is the perfect game for a fun time with friends and family. If you are alone, you can even play the game to work off some sweat and burn off calories. Just don’t overdo it and have your muscles aching for days. Game was reviewed on Nintendo Switch.