Now that you’ve gotten your hands on Tales of Arise, here’s our beginner tips to ease you into the whole gameplay loop. For series veterans, there are both familiar and newer wrinkles to the title, so read on to see what you should keep in mind! This one’s probably self-explanatory, especially to you serial hoarders out there. Games often have so-called “vendor trash”, items that exist solely to be sold off. The glut of items can also lead to people just not bothering to go out of their way to collect. In Arise, every material has its use, no matter how common or rare it is.

See, besides crafting or cooking ingredients, the world is populated by many NPCs with sub-quests that will ask for certain materials. You might as well collect everything you see so that you can turn in these quests immediately without backtracking for a fetch quest. You can also come across Herb items that give permanent stat boosts to buff up your characters. You’re free to play as one character throughout the entire game, of course. If you’re looking to spice up your battle experience, go try out the rest of the cast! Alphen, Law and Kisara are your close combat options to Shionne and Rinwell’s more ranged style utilizing astral energy, while Dohalim strikes a balance between both.

While the game leans closer to dodge and parry fighting styles, Kisara cannot dodge. Instead, she uses her shield to block attacks to defend herself or her party members. Getting used to the playstyles of the other characters can be crucial to achieving victory so that you can continue your combat momentum should your controlled character be low on HP. Instead of waiting for a chance to heal, swap instead! Mashing buttons isn’t going to cut it in Tales of Arise. As mentioned, the game has a larger focus on dodge and parry, with Kisara being the exception. Getting the timing down for your dodge will not only allow you to counter enemies from any distance, it also recovers your Artes Gauge to let you use your Artes. A perfect dodge in turn helps get you into Over Limit faster, letting you spam Artes with no AG cost and to trigger your Mystic Artes.

Boost Attacks are another thing you need to time. Your allies can tag in to perform their unique attacks as needed, but only if the Boost Gauge (BG) is full. Here’s a list of Boost Attacks and their recommended use:

Do also check out our character overview here! You can very consistently learn new Artes (skills) simply through levelling up and progressing the main story. You have both Ground and Aerial Artes, initially 3 each before expanding to 6 each, giving characters up to 12 Artes they can equip at a time. If you feel that combat is getting repetitive or harder, check on which Artes you can swap out to find new combos or replace with stronger ones. Artes can be levelled up by using them a set number of times. You can check it with the “Count” indicator in the Artes menu to see which one is closest to max level. Here’s where some grinding comes in: revisit old areas with weaker enemies and a solo party formation and start repeatedly using the Arte you want to level up in combat.

Try to get more AG To perform your Artes, you need to manage your Artes Gauge (AG). There’ll be Artes that need more than one AG to perform, so increasing this limit will naturally lead into more Artes use for battles. Additional AG can be unlocked through a character’s Skill Panels, alongside passive skills that can increase AG recovery time. You would want to prioritize SP for these, to make it easier in levelling up your Artes too. 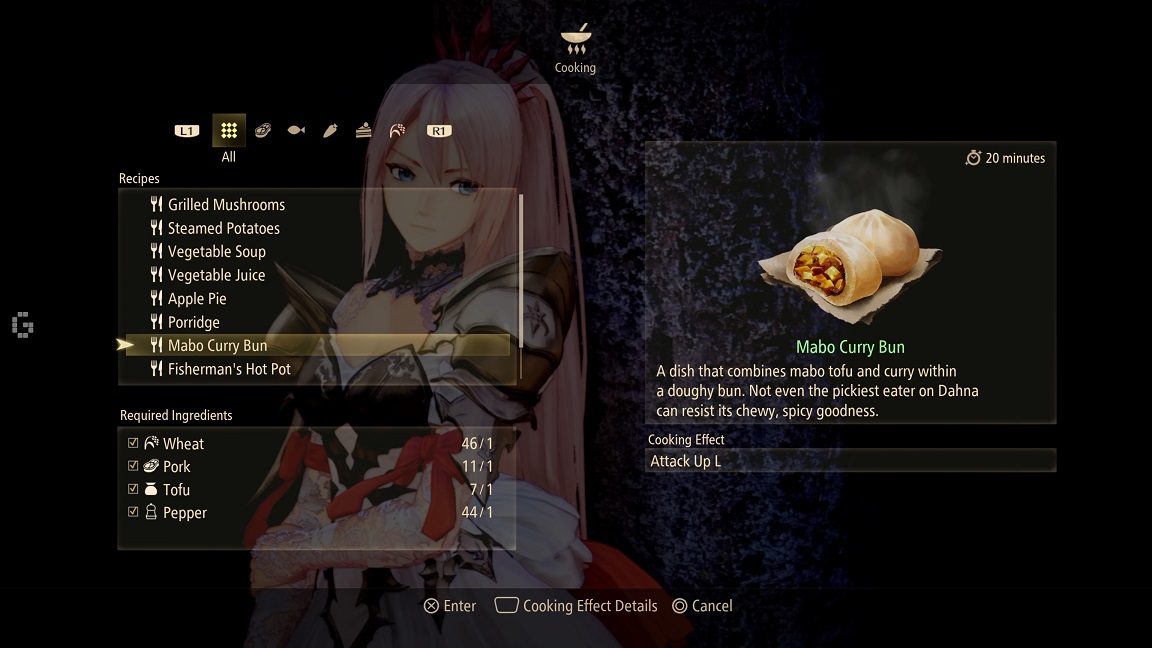 With the buffs offered from cooking, you should definitely not overlook this. You can cook at Inns or Camps, with some characters also having perks for certain foods to improve buff effects or extend the buff duration. As such, you would want to pick the most proficient character to maximize the bonuses.

Keep your equipment in check Last but not least, ensure your gear is up to date. Exploration and looting will make this much easier, as you can find the materials needed for crafting, or just finding something better from some chest. When crafting weapons, you will need the weaker version of the same weapon type in order to craft its upgrade, so don’t go selling your old stuff yet.

That’s pretty much it for our Tales of Arise beginner tips! Now venture forth into this brand new tale!