You’ll be able to select your preferred character to control in Tales of Arise, so here’s a character overview to help you decide which one you’d want to “main”! As we’d recommend in our beginner guide, it would be best that you nonetheless get used to all of them so that combat flow remains smooth.

These are characters who specialize in physical damage. Dahnans are unable to use astral energy to perform elemental Artes, hence their tendency for melee combat. Our protagonist is a sword fighter specializing in melee combat. His moveset consists of an array of fast Artes that can chain well together as combos. He can also attack enemies from a distance or while airborne, making him flexible for any challenge. He can sacrifice HP to use Flaming Edge Artes, using his Blazing Sword. It’s a high risk, high reward playstyle, as the damage output is good and costs no Artes Gauge (AG), at the cost of potentially a perpetually low HP Alphen. Flaming Edge has an added bonus of dealing even more damage when striking downed enemies. Later in the game, you can hold down the button for more powerful attacks costing even more HP. His Boost Attack lets him unleash a searing swing attack that can burn everything and can down just about any enemy, including bosses. The more HP he sacrifices, the more power he gets. If you’re familiar with Jude’s fighting style, you can expect something similar with Law’s fists and kicks. He’s somewhat a glass cannon, capable of punching through enemies but has low defense, requiring you to evade. He can raise his own physical and elemental attack and can stay that way as long as he doesn’t get staggered by an enemy, at which point the “awakened” state wears off. His Boost Attack makes him very effective against enemies with shells or shields, as he can break through them with a single concentrated attack. With his proficiency in dodging attacks, the AI is good enough that he can hit Over Limit for frequent free Artes and Mystic Arte usage than anyone else.

Last but not least is Kisara, bringing her hammer and huge shield. Because of said bulk, she can’t dodge, but she can guard to reduce damage while also protecting her allies. Her Artes have wide range too, so you have a better shot at defensive maneuvers. Kisara’s specialty is her defense, as you might guess, capable of triggering Artes even while guarding. Successfully blocking enemy attacks will raise her morale, which then makes her Artes and combos while guarding stronger and harder to block. Her Boost Attack sees her plant her giant shield into the ground, downing enemies it hits and weakens their charge attack, simultaneously boosting ally physical and elemental defense.

Now we move on to the party who specialize in long-range attacks, or use Astral Artes. Typically find these to be Renans. 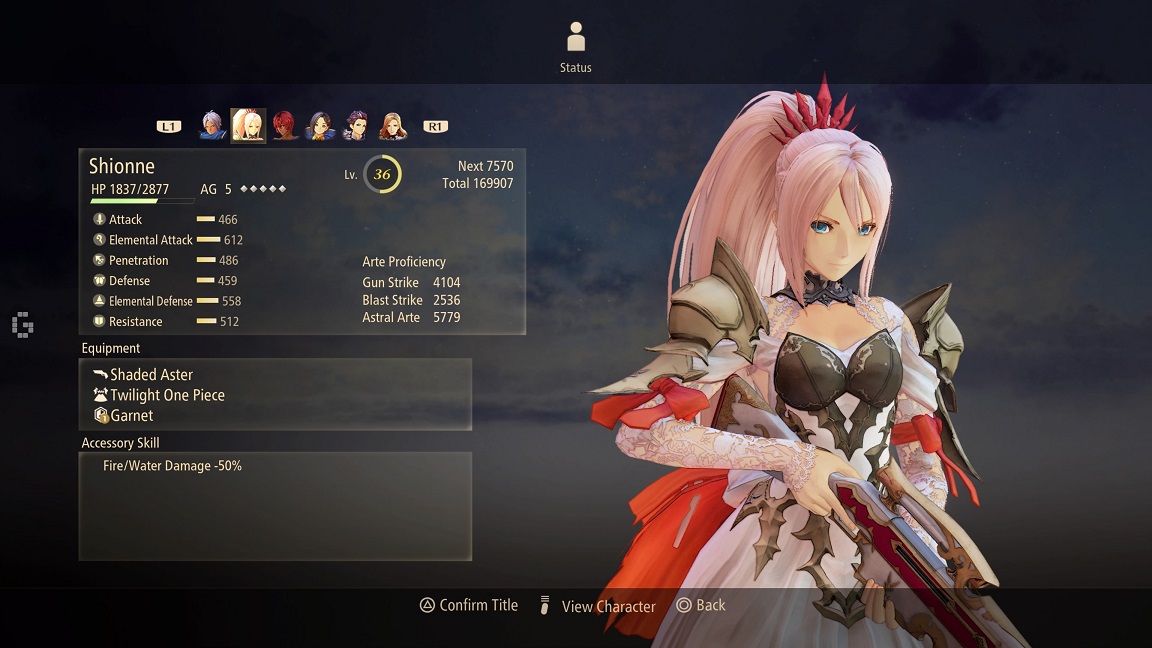 Shionne uses her gun and Astral Artes to fight from a distance, while also packing Healing Artes. While another character can also use Healing Artes, Shionne is the one who has this ability from the start, and can flourish into an even better support. Unlike regular Artes, Healing Artes utilizes Cure Points (CP), and with how the AI works, Shionne can very often keep your party topped up, which may make not having any CP a little awkward. Shionne is able to fire special ammo at a bomb she tosses out for a more powerful detonation. You can reload anytime, with the prompt to the right of the AG. Her Boost Attack fires numerous beams of light that can penetrate enemy defenses in a wide range, most effective against aerial enemies to restrict their flight and down them. While Dahnan, Rinwell is from a line of mages that’s almost extinct, allowing her to use Astral Artes. As you might guess, you’d stick her in the typical caster role with an array of elemental Artes at her disposal. Her Artes are powerful and have a wide reach, but she will require some casting time. Make sure she’s at a safe distance from foes before you begin channeling. Play around with Rinwell’s casting time as she can delay the actual Arte activation with a button hold, or save it for instant casting with another button press. Charging Artes in this way activate after your next attack or Arte, allowing for Arte combos. Channeling the same Arte as your previously charged results in a higher tier spell, even if Rinwell herself hasn’t properly learnt it yet.

Her Boost Attack can down enemies who are channeling Artes, stealing their spell and charging it for herself, also temporarily sealing the enemy’s use of that Arte. It can pretty much disrupt any casting, making her quite invaluable against the strongest story bosses.

Equally competent in both close and long range, only one of the cast fits the bill. This master of rod-based and Astral Artes makes him an incredibly flexible party member. Unleash a flurry of wide-reaching blows in melee, and combo that with long-range elemental Artes or healing as needed. Definitely the best character for those who like to easily adapt to any combat situation. Similarly to Law, Dohalim gains bonuses as long as he avoids enemy attacks, gradually extending his range of attack and allowing him to interrupt enemies, as well as land critical hits more often. His Boost Attack is best utilized against highly agile enemies, as the vines he summons can stagger and nullify their evasive abilities while also downing them for a period of time.

That’s it for our Tales of Arise character overview! Take your time to familiarize yourself with their movesets, you may discover a new playstyle you like yet.